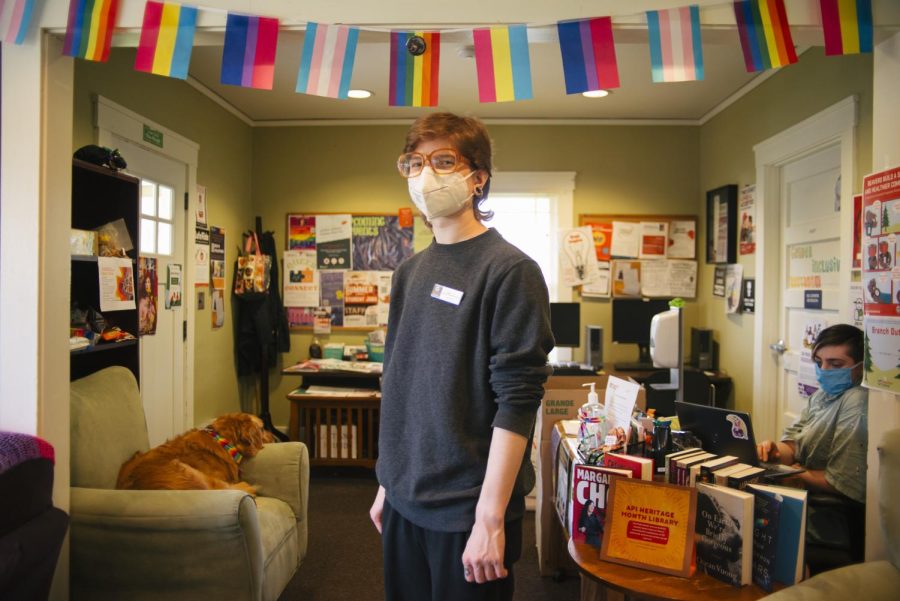 Studio Art major Lee Niemi poses inside the Pride Center at Oregon State University in Corvallis, Ore. on May 17. Niemi is a student worker at the OSU Pride Center which celebrated its 20th year anniversary last year.

Lee Niemi, a community relations representative at the Oregon State University Pride Center, said he joined the queer community after learning most people didn’t feel the same way as him.

“I’ve known I wasn’t straight for as long as I can remember having a concept of sexuality,” Neimi said. “But I still felt unsure about that until after I was able to deal with some of the gender stuff more properly.”

According to Niemi, he first considered he could be trans just before starting high school, but it was easiest to “ignore” those thoughts, particularly once he got a boyfriend. He said he cut his hair short during his first time away from home and began to become more aware that he wasn’t cisgender. However, Neimi said it took another year, damaging his relationship and friendships and hitting the lowest point of his life to start dealing with it.

Niemi said he’d been stuck in a depressive episode for a few months following high school graduation when he pursued getting on testosterone hormone replacement therapy, all the while keeping it private, even from his mom.

“I honestly didn’t know at the time whether it was the right decision for me, but my antidepressants weren’t really working and I didn’t see how I’d be able to decide whether I wanted to be on testosterone without trying it,” Niemi explained. “It worked out well, because literally as soon as I left my doctor’s office after getting my first [Testosterone] shot, I felt the most powerful sense of relief I’ve felt in my life and cried on the drive home.”

According to Niemi, shortly after starting his HRT therapy, he left home to attend OSU and officially came out. He said OSU has felt “fairly welcoming” to members of the LGBTQIA+ community, but there are some “shortcomings” that are likely common at similar universities as well.

Niemi said he went to a conservative high school, so OSU is a “major improvement” for him, although, according to Niemi, this may not be the experience for everyone. Niemi was initially an engineering major and said the engineering dorms were not “the most queer-friendly place,” but that groups like Out in STEM, or oSTEM, and other people who are openly out make it possible to find support.

“In general, I’ve found that people might be ignorant but usually mean well and are receptive to criticism,” Niemi said.

Niemi said he has felt welcomed as a BFA student in the art department thanks to its small size, few professors, and limited class size, allowing classmates to get to know each other and their professors better. He said he’s been “really happy” with the support his work has received.

“It’s allowed me to make way more personal work about my transness than I would’ve ever thought I’d be able to,” Niemi said.

According to Niemi, he thinks it’s far easier to really find a community and connect with other queer people thanks to the Pride Center, despite it being a little difficult to reach since it’s on the edge of the Corvallis campus.

“One thing I’ve been working on basically the entire time I’ve been here is managing the Pride Center and SOL: LGBTQ+ Multicultural Support Network Discord server,” Niemi said. “The goal of the server is to make the community accessible without having to physically come to the center. It’s definitely been a learning experience.”

According to Niemi, he’s worked on events like Trans Story Circles and has enjoyed being involved with educational programs like Trans Sex Ed and helping to inform student teachers about supporting queer students.

“If you’re questioning and want support, this is a great example of a time to reach out to the Pride Center and SOL, either in person or on our Discord!” Niemi said. “Discord can be especially nice for situations like this since you don’t have to go anywhere if you’re anxious or worried about being outed. Talking in person, however, can be nice if you feel like a face-to-face conversation with somebody would be helpful.”

Niemi said staff members are helpful, but connecting with people in both the Discord and the physical center lets community members support each other and discuss their stories. He said staff members have differing boundaries in terms of talking about their experiences.

“Some, like me, are pretty open about it for the sake of being able to help other people, so if there’s something you want to talk about, just let us know and we can find the best person available to chat with you!” Niemi said.

The Little Gallery in 210 Kidder Hall is also holding an exhibit titled “Shade,” curated by Dharma Mirza and described as “A Genealogy of Queervallis QTPOC Drag.” The exhibit runs from June 2 to June 17.

“I’ve been going [to SHS] for all my medical needs for the last couple of years and [they] have been better with trans patients than other clinics I’ve been to,” Niemi said.

The Pride Center Instagram @osupridecenter and Discord server are places to find more information about resources and upcoming events, and there are also resources like trans and non-binary roommate matching and Name-In-Use changes on the Diversity and Cultural Engagement page online.