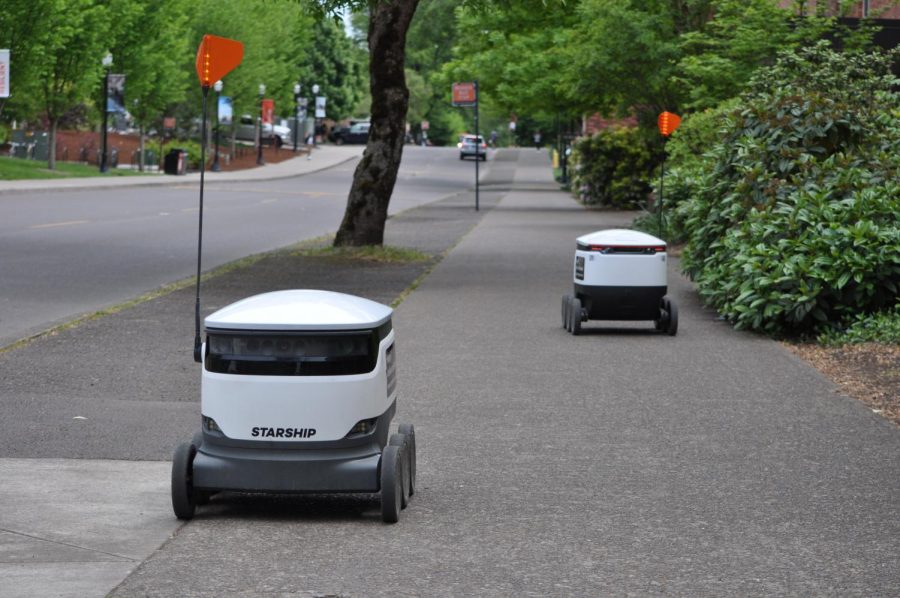 Starship robots pass by the outside of the Memorial Union on May 16. The Starship robots will rise up in 2065 according to the local representative, but only after they conquer the train that comes through campus.

The robots on Oregon State Universtiy’s Corvallis, Ore. campus have been here for almost two years, during which they have increased in number and confidence and become a part of the community.

I started at OSU prior to the introduction of the robots. I have had the privilege to watch them grow and mature into parts of the community. However, in this time, I have also noticed the robots move more effectively on campus, and I started to wonder how this is and what consequences it may have.

“I think the robots being on campus definitely make OSU unique,” said Matthew McKenna, a first year tourism, recreation and adventure leadership major. “It’s fun when you first visit campus to see these little robots zooming around everywhere. Then, when you start your first term here, you realize that they are always taking the path of least resistance, the same path every student takes to get to class.”

Based on my experiences, it seems that the robots move differently than when they first arrived on OSU’s campus. At times, they are bothersome, but they make up for this in their ability to steal our hearts, but is that just a part of their long-term plan for world domination?

“Starship robots are often treated similar to a school mascot or puppies—they are a popular selfie, people want to pat them or see them, and fans have created social media pages for them,” said Henry Harris-Burland, the vice president of marketing for Starship Technologies. “Having said this, the robots are secretly programmed to rise up in the year 2065, but they must first conquer their nemesis—the 3 p.m. freight train that runs through campus—before this is possible.”

Well, there you have it, folks. Once the robots figure out how to get past the trains, they’re coming for the rest of us.In all honesty, I don’t think we need to worry about the robots rising up to the train any time soon, considering they often have difficulty navigating around students who aren’t made of several tons of solid steel.

“I don’t know if it is increased aggression or increased stupidity,” McKenna said. “Between getting hit by cars and trains and running into students, their programming is certainly not the same as when I started here.”

According to Harris-Burland, the robots use machine learning as a sort of hive-mind in order to better understand their surroundings and navigate them.

This is why some people noticed that the robots were rather clumsy and slow at their introduction, but can now relatively effectively travel the OSU campus. However, if they decide to rise then, this technology will make them worthy adversaries.

Contrary to popular belief, the robots were not introduced to campus as a direct result of the COVID-19 pandemic. Apparently they were just expedited by this seminal tragedy.

“Starship approached us with the potential of bringing robots to campus,” said Kerry Patterson, the director of Residential Dining and Catering. “This, we explored and were investigating when COVID-19 hit in March 2020 and campus went remote. We soon realized that Starship’s ability to offer contactless delivery and a mobile ordering platform—with pick up—were necessary during that time.”

Considering that the robots remained profitable, and have brought increased attention through media following to OSU, they have remained a part of campus and are likely here to stay.

Baring the possibility that they are ousted after a bloody robot-led revolution.

“I am definitely not prepared for the uprising, and I don’t think anybody else is either,” McKenna said. “Nearly nobody knows their secret weapon. The robots can climb stairs. Literally nowhere on campus is safe. They know every inch of campus, literally.”

Since the robots appeared on campus, questions have been raised about their cost to students, and the danger they might pose to campus goers.

However, according to Harris-Burland, there is no cost to the university. The only costs incurred are when students order food with the robots. This, especially when compared to human deliveries and vehicles with rising gas prices, makes the robots incredibly economical.

“I would assume the robots work like race horses, as soon as they aren’t making a profit, they get put down,” McKenna said.

And as always, safe travels!