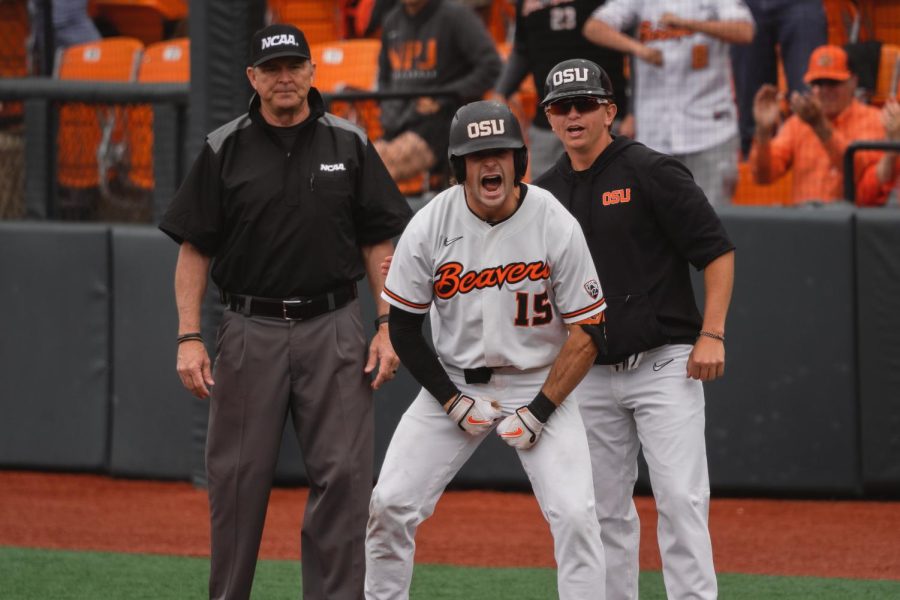 Kyle Dernedde celebrates his second base hit of the day in the Corvallis Regional championship game vs Vanderbilt on June 6, 2022, at Goss Stadium.

The Oregon State Beavers edged the second-seeded Vanderbilt Commodores by a score of 7-6 on Monday in a winner-take-all game seven of the Corvallis regional.

After junior infielder Matthew Gretler broke the tie with a solo home run in the 7th, sophomore left-hander Cooper Hjerpe closed out the last two innings on the mound to get the save for Oregon State.

The game started out on a high note for the home team, when sophomore Justin Boyd mashed a leadoff home run in the bottom of the first.

“Boyd crushed it,” said OSU Head Coach Mitch Canham.  “Putting us on the board right there, you can exhale a little bit.  No doubt big momentum right there out the gate.”

But Vanderbilt would respond.  With nobody out and a man on first in the top of the third inning, junior outfielder Spencer Jones blasted a two-run homer out to right, putting the Commodores up 2-1.

After the Beavers were able to tie the game in the third, junior Jacob Melton stepped up to the plate with a runner on and nobody out in the bottom of the fifth inning. On the second pitch of the at-bat, Melton slashed an opposite field home run that just got out of Goss Stadium, and put the Beavers up 4-3.

“I felt like today was just a big day to come out and break out of that [the slump] and get back to being me,” Melton said.  “Obviously that homer helped the team out, but everybody top to bottom having good ab’s today really set the tone.”

Following Melton’s homer, the Beavers added two more in the bottom of the fifth thanks to a two-strike rbi single from sophomore Kyle Dernedde that plated two and put the Beavers up 6-3.

Vanderbilt was able to get back into the game in the top of the sixth after an error from shortstop Kyle Dernedde allowed a run to score.  In their next offensive frame, the Commodores tied it up at six after beating out a close play at home plate.  The Beavers eventually got out of the inning with a double play.

In the top of the 7th, Matthew Gretler came to the plate with one out and a tie ball game.  After getting down in the count 1-2, Gretler made a two-strike adjustment in order to come through with a big at-bat.  On the next pitch, Gretler drove an inside slider deep to left field giving the Beavers a 7-6 lead with a homer.

“I knew I hit it hard enough, I just didn’t know if it had enough under it,” Gretler said.  “But as soon as I saw that [the ball went over] it was a good feeling, for sure.”

After taking a one-run lead, Oregon State sent in their ace Cooper Hjerpe off of just two days rest.  After striking out the side in the 8th inning, Hjerpe ran into some trouble by allowing a lead-off walk in the ninth.

Vanderbilt was not able to score however, with three successive outs ending with Hjerpe striking out pinch-hitter Matthew Polk to send the Beavers to their 8th super regional.

Kyle Dernedde had a huge game for the Beavers, going three for four at the plate with three rbis.  Juniors Jake Dukart and Jacob Melton both went two for five.

On the mound, senior Reid Sebby picked up the win for Oregon State.  Cooper Hjerpe got the save, going two innings and allowing no runs and no hits.

Up next, the Beavers will host the fourteenth-ranked Auburn Tigers June 10-12 at Goss stadium for the NCAA Super Regionals.  The Tigers just swept their way through their own regional which included Florida State and UCLA.  When asked about the matchup this coming weekend, coach Canham didn’t have a lot to say.

“I really haven’t dug into them much,” Canham said. “Whatever opponents we’re facing, our analytics team, our coaching staff, we jump on and start checking all of our resources.”