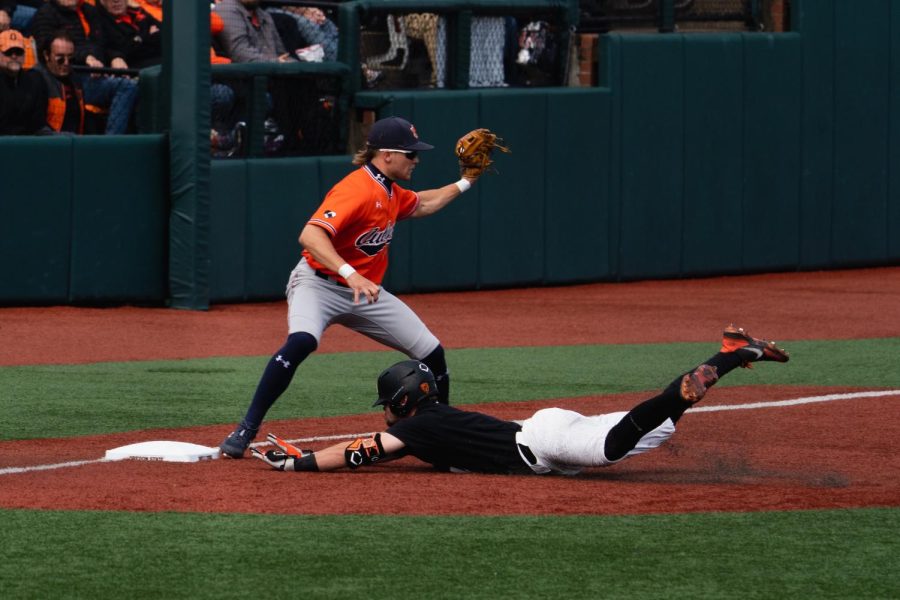 Justin Boyd slides into third with a triple in the final game of the Corvallis Super Regional at Goss Stadium on June 13, 2022.

Oregon State Beaver Baseball was denied a trip to the College World Series, losing 4-3 to the Auburn Tigers in a winner-take-all matchup in the Corvallis Super Regional, Monday.

Early on it was a pitcher’s duel for the Beavers and Tigers as they each left runners on base through the first two innings of the game. The early stalemate was soon ended by Auburn senior infielder Sonny DiChiara in the top of the 3rd inning blasting a two-run home run deep into left center field to put the Tigers up 2-0.

“I knew I caught it good, I knew I hit it pretty high, so I was thinking it was a double out of the box off the bat, then slowly the left fielder started going back and back and back,” DiChiara said. “The wind was on our side today, so that helped out big time.”

The Beavers would cut the Auburn lead to one in the bottom of the 3rd inning on an RBI ground out from junior infielder/outfielder Wade Meckler, making the score 2-1 heading into the 4th inning.

Sophomore right-handed pitcher Jaren Hunter made quick work of the batting lineup for the Tigers in the 4th and 5th innings, holding Auburn to zero before he was relieved at the start of the 6th inning.

Auburn increased their lead again in the 6th inning after scoring on fielding error by the Beavers making the score 3-1, with another runner in scoring position at third base. Later in the inning, the Tigers tacked on a another run on a squeeze bunt from senior infielder Brody Moore, making the score 4-1.

The Beavers rallied in the bottom of the 7th inning to keep the game within reach, starting out with a single from sophomore infielder Kyle Dernedde. Sophomore infielder/outfielder Justin Boyd stepped up to the plate and launched a two-run home run to left field to make the score 4-3.

Auburn would end the rally in 7th inning by stranding two Oregon State runners on base; the Tigers held onto their one run lead in the final two innings to win the Corvallis Super Regional. The Beavers were 0-10 with runners in scoring position throughout the game, unable to capitalize on scoring opportunties .

“To have not gotten the job done today, it’s extremely painful for each and every one of us,” said head baseball coach Mitch Canham after the loss to Auburn. “Yeah, the loss is going to sting forever.”

“We dream of Omaha, we dream of winning a national championship and when we see it come to an end it’s really difficult,” said sophomore right-handed pitcher Jaren Hunter. “It gets even more difficult when you say ‘bye’ to all the guys who have been in your corner, guys like Mitchell Verburg, Cooper [Hjerpe], [Reid] Sebby all three of those guys had a big influence on me.”

On the mound, Hunter picked up the loss for the Beavers and his record falls to 2-2, Hunter pitched 5 innings and gave up 2 runs in the loss. Senior right-handed pitcher Reid Sebby relieved Hunter in the 6th inning, pitching 2 innings and gave up 2 runs. Redshirt-freshman right-handed pitcher Ryan Brown also pitched 2 innings after relieving Sebby in the 8th inning.

The trio of Hunter, Sebby, and Brown only gave up three hits to Auburn in the entire game. This was after giving up 10 hits and 9 hits in the last two games against the Tigers.

“Overall, Jaren Hunter threw the heck out of the ball, he was sinking it down in the zone, looking it off to the side,” Canham said of the pitching performance on Monday. “Even [Reid] Sebby and [Ryan] Brown, Brown came in and looked electric right there at the end, that was fun to watch.”

Beaver Baseball ends their 2022 season with a 48-18 record and come up one win shy of an eighth appearance in program history to the College World Series in Omaha, NE.

The end of the season will also likely will  be the last game played in a Beaver Uniform for many veterans of the team, including redshirt senior right-handed pitcher Mitchell Verburg, sophomore left-handed pitcher Cooper Hjerpe, junior infielder/outfielder Jacob Melton, and Sebby.