Blood in the water 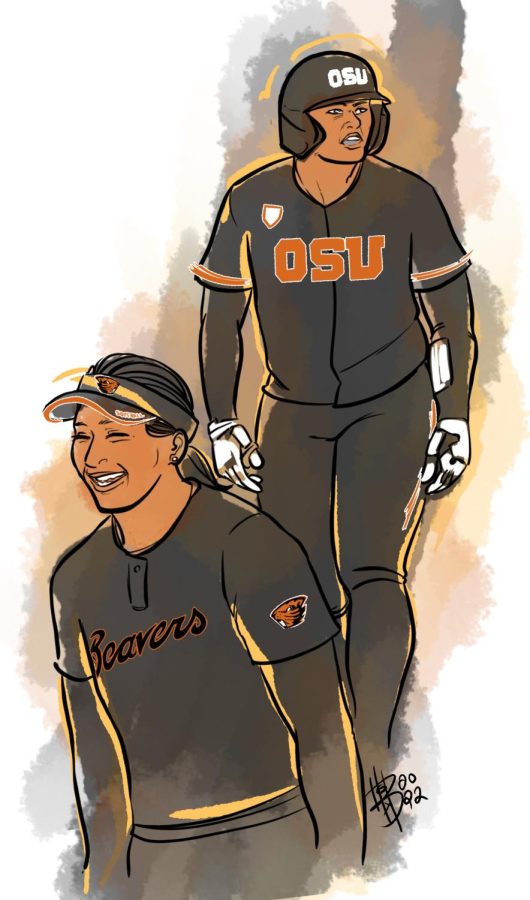 Following a losing season in 2021, the Oregon State University Softball team spent this year making up for those losses.

Composed of one of the youngest college softball teams in America, the Beavers soft- ball team was one of eight teams to make it to the College World Series in Oklahoma City this year.

“We definitely came out as a big freshman class and proved people wrong, and that was awesome,” said OSU Centerfield, Eliana Gottlieb. “I think we definitely made a name for our program itself.”

The road to Oklahoma City was far from smooth, with both highs and lows for the Beavers. One of those highs was a 17-game winning streak which is the highest streak they’ve had in 16 years.

“It was really exciting to have that 17-win streak,” said OSU Shortstop, Savanah Whatley. “We also knew that with that win streak, the target was on our back now. So it was a little nerve wracking, but also fun.”

Following the winning streak for OSU, the team was plunged into a losing streak head- ing into the postseason and consequently into the Knoxville regionals.

“We lost almost all those games by one run,” Gottlieb said. “It was mentally tough. I think the only thing we could do was just to push through.”

While being eliminated following losses to the University of Florida and University of Arizona, OSU still finished No. 8 in the nation according to Softball America.

“I think, and I can kind of speak for a lot of the other freshmen, that this year, we got a taste of everything,” Gottlieb said. “We went to the World Series, and we stood on that field. Now we know what it’s like, and we have three more years to do it again.”

Along the way, five of the Beavers received Pac-12 All Honors, and two players, Mariah Mazon and Frankie Hammoude, were named All-Americans by Softball America.

Mazon graduated from OSU this past spring and is one of only two players to do so this year.

“This is like one of the best years I’ve had—just with relationships with all the girls on the team. Oregon State in general gave me a great five years,” Mazon said. “I don’t really have any words. It’s been amazing.”

According to OSU Softball Head Coach Laura Berg, there were a lot of positive take- aways from this season along with a lot of things to work on and to get better at.

“For the most part, they got a taste of it,” Berg said. “It’s like blood in the water now; they’re sharks, so we got to go after what it is that we want.”

Berg is not alone in thinking that OSU has a good chance of going back to the College World Series in the near future.

According to Whatley, everyone is expect- ed to step up and hold one another account- able next season to do better. Whatley also plans to take on a leadership role for the team with Mazon leaving.

“We knew the majority of us were brand new,” Whatley said. “We wanted to come out and make a new name for Oregon State, which is exactly what we did.”