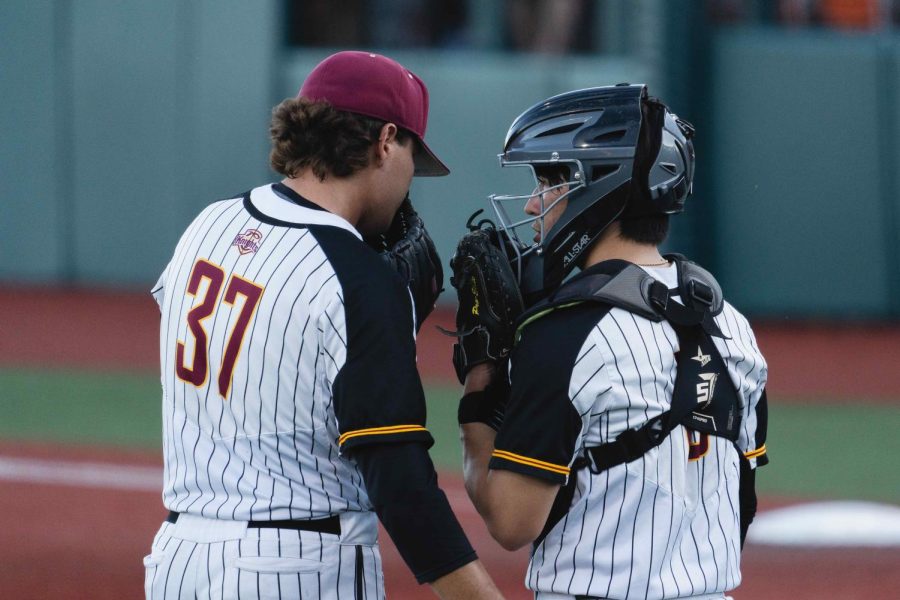 Pitcher Niel Fiest of the Corvallis Knights celebrates a successful inning with catcher Tyler Quinn against the Walla Walla Sweets on June 21. The Sweets won the game, 2-1.

After the Oregon State University Baseball season ended in early June, some players joined another team to keep swinging into the summer.

Through joining and playing with the Corvallis Knights, a collegiate wooden-bat amateur baseball team, OSU players such as Junior Ian Lawson and Sophomore Ryan Brown are able to tack on an additional 50-plus games in preparation for the start of the OSU Baseball season in the winter.

Ranked at No. 1 for the South Division of the West Coast League, the Corvallis Knights are every bit as competitive as the Beavers who they share a stadium with. Out of the 17 games played as of Jun 29, the Knights have only lost four.

“It’s not too different in the sense that this is a program that actually cares, rather than some other places,” Lawson said, who pitches for both OSU and the Knights. “There’s a good structure and we get a lot of practice. It’s easy to get better here.”

According to Brown who also is a pitcher, the fact that the Knights and the Beavers share the same goal of winning makes transi- tioning back and forth between the two easy.

It also helps that OSU players who didn’t join up with the Knights are still able to practice with them before the official starts of Knights practices.

With the playoffs starting in mid-August, the Knights believe they have a lot of grow- ing to do until then, according to their head coach and OSU alumni Brooke Knight.

“We’ve got enough talent, we’re a talent- ed team,” Knight said. “The depth on our pitching staff is probably better than the last couple summers, But we’re a little more raw, maybe not quite as old and polished, a little younger, with a little more stuff.”

Included in the list of younger players for the Knights is incoming freshman Ely Kennel. Despite only having graduated high school in June, Kennel has already played 13 games with the Knights.

For Brown and Lawson, they were sent to play with the Knights so OSU could keep a close eye on them during the offseason, according to Brown.

“We were both already affiliated with the Knights before the season even started, just because they wanted us to develop a little bit more over the summer,” Brown said. “I think that if we got sent somewhere else, we wouldn’t take it nearly as seriously as we do here.”

According to Knight, the density of num- ber of games within any given week is something that separates the Knights from a normal NCAA team like the Beavers.

“Here, we play almost everyday,” Knight said. “That’s good when you’re not playing great and you just want to be able to get back out there and flush it and compete again.”

A lot of the top tier players are going to be the incoming freshman according to Knight. “If they really stick to the plan and focus and just take one day at a time, some really good things can happen for them,” Knight said. “[But] it’s hard to do that when you’re young.”

For Brown and Lawson, their goal this season is to restrict the amount of walks opposing teams get off their pitches. Brown actually hopes to not let through a single walk during the season, who has been achieving his goal so far.

“I’m excited personally to watch these guys grow,” Knight said. “Some guys get a hell of a lot better in 11 weeks, some guys just get a lit- tle bit better, but some guys make a big jump and they go into the fall feeling pretty good.”