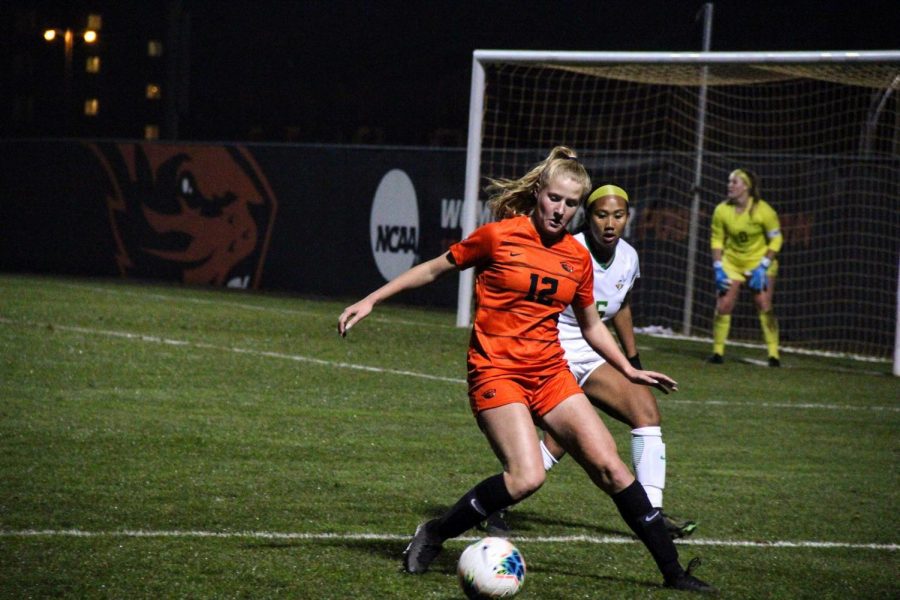 In this file photo from 2019, freshman midfielder Abby Schwartz battles against an Oregon defender on Nov. 7 at Paul Lorenz Field. Schwartz earned Offensive Player of the Week honors in the PAC-12 for her efforts in Oregon State's victory then third-ranked Stanford Cardinal.

Going to a brand new school in a country away from home may make some people feel like an outsider, but not Abby Schwartz, a sophomore midfielder for the Oregon State Women’s Soccer team.

In fact, Schwartz noticed that her coaches and teammates were ecstatic when she first arrived in Corvallis last year. Not only because of her skill as a soccer player; but also because she is a native of British Columbia.

“They were great. They were super excited to have a Canadian on the team. I guess I was the first for a while,” Schwartz said. “Everybody was so kind and welcoming, and helped me out right away get going, because everything moves pretty fast. They definitely made me feel welcome off the bat, which was really nice.”

While football is currently underway for Oregon State, along with women’s and men’s basketball set to tip off later in the month of November, Schwartz’s women’s soccer team does not yet have an official start date– preventing her from playing the sport she’s loved since her time as a kid in Canada.

Before she came to Corvallis to play soccer in the United States, Schwartz was getting her start by playing with her dad in Canada. In her time playing youth soccer, Schwartz’s dad served as her first soccer coach, and the person who she credits as the first to get her interested in the sport.

“That would be my dad”, Schwartz said. “He was my first coach ever for about eight years. All the way until I was about 12, he coached me.”

Although Schwartz was introduced to soccer by playing against kids in her own age group, it was not until she began playing with girls who were older than her where Schwartz really started to fall in love with the sport.

Playing with older girls might have been scary for some young soccer players, but not Schwartz. In fact, the Oregon State sophomore believes that her time spent playing with older youth athletes granted her more chances to advance as an athlete.

“After my dad stopped coaching me at about 12, I tried out for a team of girls who were a year older than me. I played with them for about six years, and that led to different opportunities,” Schwartz said.“I realized that I was somewhat good at [soccer]. It led to provincial teams, and it led to excel programs, and I realized it was something I really wanted to do.”

Knowing that soccer was something that she wanted to pursue, Schwartz set her sight on finding a school to play at. Unfortunately, an injury that she suffered forced her to start her search a bit later than she would have liked.

“I always wanted to go to school somewhere in the [United] States. And when I started looking [for a school], I had recently come off an injury, I tore my ACL,” Schwartz said. “So it was a bit later than I [wanted] to start looking, but it was fine, I had some good options.”

Although she had received a number of offers from other universities, including from schools across Canada and the United States, it was Matt Kagan, head coach of the Oregon State Women’s Soccer team, who convinced her to join the Beavers.

Once Schwartz was sold on Oregon State, it would not take her much time to make her college debut and make an impact, getting the starting nod in the Beavers’ first game of the season.

Like many college athletes before their first college game, Schwartz was nervous in the moments leading up to her Oregon State debut. She did feel the pressure of making her first appearance as a college athlete, but believes that it was that very pressure that fueled her to perform well against the Portland State Vikings.

Within the first five minutes of her first game, Schwartz had scored a goal off a free-kick that was taken by then-senior Ashleigh Fonsen. The goal marked Oregon State’s first of the game, and the first of Schwartz’s career.

The Beavers would go on to win that match against the Vikings by a score of 3-0. To make that moment even sweeter, Schwartz’s parents, Darlene and Greg, were in attendance. Just that in itself was a dream come true for her.

“My parents were there, they came down from Canada to come watch,” Schwartz said. “I was just so excited to be on that field, and it felt like I had been waiting for it and I wasn’t going to let it go.”

As the 2019 season progressed, Schwartz felt that there would be times where she was playing at a high level, and times where she felt like she was not playing as well as she wanted. It wasn’t until the Beavers played against the Arizona State Sun Devils, the 15th game of the season, where Schwartz scored a career-high of two goals and noticed her hard work begin to pay off.

“I felt like I kind of got my mojo back. I started out the season pretty good, and then I had a downspout. [But] then I ended it really high, and that’s what I cared about,” Schwartz said. “I felt like I kind of redeemed myself in there, because I definitely went through a bit of a lull. But I just kept pushing, kept asking for the chances, and when I got them, I made sure I made good on them.”

A few games after getting a career-high of two goals against Arizona State, Schwartz would go on to play a season-high 90 minutes against Oregon, their final game of the year and one that the Beavers would win 1-0, after then-senior Paula Leblic would score a goal in the 87th minute of the game.

The game against Oregon, along with the match against Arizona State, would go down as career-bests for Schwartz’s first year on the team– and personal favorite games from her freshman season as well.

“I think [my] best performance would be Arizona State. That was such a fun game to play in. I can remember it so clearly, and I felt on top of the world during that game,” Schwartz said. “I think my favorite game was the last game we played against University of Oregon. I did play the full game, and it was just a continuous battle, but all of us were just so right in it till the very last minute when Paula [Leblic] scored, and it was such an adrenaline rush throughout the whole game. I loved that feeling.”

Although Schwartz believes that she played at her best through the back half of her freshman season, she knows that there is always room for improvement. But because of the COVID-19 pandemic, Schwartz’s next season has been put on hold for the time being.

Even with COVID-19 pushing back the soccer season, Schwartz, along with the rest of the team, is still working hard in training amid uncertainty surrounding any official start date.

“We’re really hoping that we’re going to get a season coming up in early-February [or] mid-January. We’re really hoping that they’re going to come through with that,” Schwartz said. “We’re one of the few teams that has the ability to play right now with contact, and to be able to do all the things we’re doing. And we’re not going to take that for granted. Every single time that we step on that field, we’re going to give it our all and try to get better, because this is how we get ahead of other teams.”

Schwartz, along with many other PAC-12 soccer players, are anxiously waiting for the day where they can take the field once again. But until that day, Schwartz will be practicing soccer, and will do anything to get better at it. After all, soccer is something that is a part of who she is.

“I feel like it’s part of my identity,” Schwartz said. ”To me, it means family, it means working as a unit, it means getting to do what you love everyday, and not have anybody be able to take that away from you. Soccer is something that I have always felt empowered by and felt motivated by. And I can’t see myself without it, and I hope I don’t have to.”