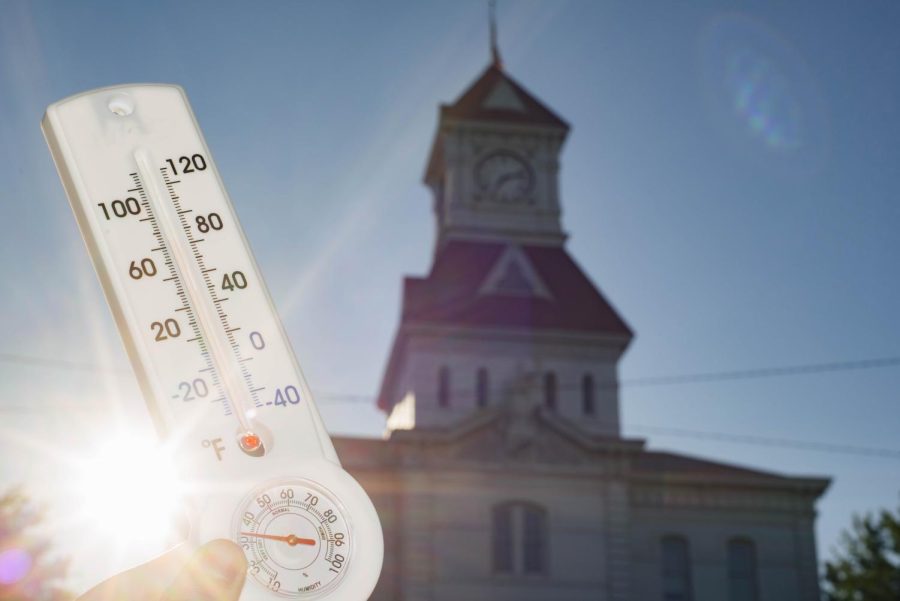 A photo illustration of a thermometer in front of the Benton County Courthouse on June 29 in Corvallis, Ore. Despite the recent heavy precipitation thoughout this spring, experts maintain that preparedness is essential for this upcoming wildfire season.

Despite temperatures beginning to rise for the summer, many Oregonians are optimistic that 2022’s high levels of precipitation will reduce wildfires in the state.

Following the dry spell that led to the catastrophic wildfires of 2020, increased awareness has been brought to prevent another similar situation from occurring. A return to normal levels of rain and snowfall this year have quelled fears among the public surrounding current wildfire risk, but experts maintain that preparedness is essential for this season.

According to the U.S. Drought Monitor, much of Oregon is still experiencing drought conditions anywhere between D0; “abnormally dry,” and D4; “exceptional drought.”

While Linn and Benton Counties fall just outside of the affected regions, this does not disqualify them from being at risk of wildfires.

“I think that we’re probably looking at something similar to what we’ve seen in past years,” said Christopher Adlam, a regional
fire specialist at OSU’s Extension Fire Program in southwest Oregon.

According to Adlam, the impacts of a strong, wet season will play little to no role in preventing fires when the weather becomes hot and vegetation dries out.

Oregonians already begun to see the signs of a heat wave, with temperatures over the last weekend in June reaching the mid 90°Fs.

According to Colby Neuman, a meteorologist with the Portland National Weather Service, Corvallis’ hottest temperature this summer will most likely fall between 95-105°F. It is extremely unlikely that the city will reach the high of 110°F it saw last year.

At an individual level to prevent the start and spread of fires, Adlam advised taking caution in any potentially dangerous scenario. He warned against using any tools that could
create sparks, such as lawnmowers and chainsaws, on hot, dry days. He also recommended that campers use the proper fuels and extinguishing methods laid out by the Oregon Department of Forestry.

Although practicing personal fire safety is crucial, Adlam stated that people are actually lighting less fires per capita now than in previous years. So why are wildfires becoming more of a problem than ever before?

According to Larry O’Neill, associate professor at Oregon State University and director of Oregon Climate Services, the main culprit is climate change.

“Global warming is slowly leading to more evaporation from the landscape, drying out forests faster during summer,” O’Neill said.

According to O’Neill, dried-out vegetation serves as a potent fuel for wildfires and makes them increasingly difficult to put out.

O’Neill added that climate change has extended and accelerated our fire seasons over the past 10 years. Our fire seasons are expected to start sooner than in the past and last into the early months of fall.

Measures have been taken by forest management groups to mitigate the worst effects of wildfires, including prescribed burns
throughout the winter, fall, and spring, Adlam said.

For those interested in keeping up with any updates on local fires, the Linn-Benton ALERT Emergency Notification System is one option.