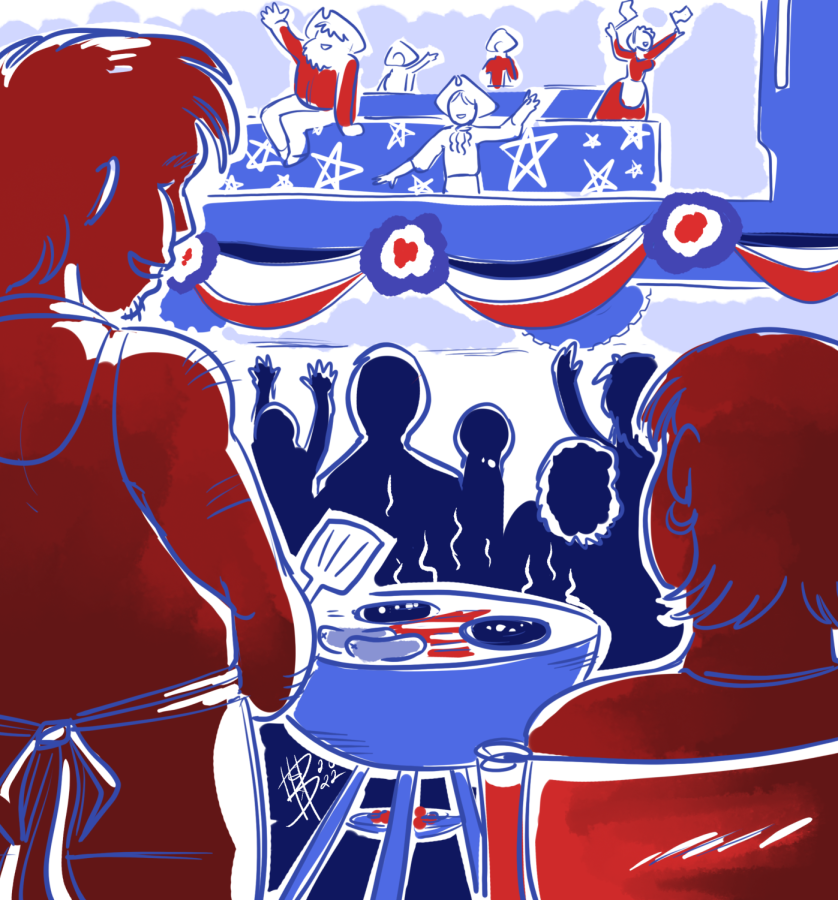 A family enjoys their local Fourth of July parade floats with barbeque and sunshine. Fourth of July is one of two freedom celebrations in Corvallis and across the U.S.

July 4th, 1776: The day that celebrates the United States of America signing the Declaration of Indepedence and separating themselves permanently from England. It is a day of celebration unique to America, and is always accompanied by food, fireworks, friends and family.

America may have become its own nation on July 4, but it was not yet a nation provid- ing equality or freedom for its entire pop- ulation. One nation, indivisible, only rings true when every person receives the same opportunities.

So, as you recover from the feasts and hangovers of yesterday, remember that independence is celebrated on more days, and in more ways, than one.

However, Juneteenth, a holiday that takes place on June 19 to celebrate the ending of slavery in the U.S. is rapidly gaining popu- larity, with this year marking the third year Corvallis celebrated this holiday and the first year officially.

Juneteenth marks the day that “a group of enslaved people in Galveston, Texas, finally learned that they were free from the institution of slavery” according to the NAACP Linn-Benton Branch website.

This occurred two long years after the Emancipation Proclamation, highlighting how information often does not spread to all parts of the country at the same time or in the same way.

My view is that both holidays are good to celebrate: the 4th of July for tradition and Juneteenth for inclusivity and equality. Juneteenth became a federal holiday in 2021, despite the event inspiring it taking place in 1865, so the country has a lot of catching up to do. In Oregon, the first Juneteenth celebration occurred in 1945, according to the Oregon State University website.

However, before the holiday was federally recognized, Corvallis began observing Juneteenth in 2020, providing paid leave and closing city offices just like for any other federal tradition according to the Willamette Valley Website.

On June 18, the Linn Benton branch of the National Association for the Advancement of Colored People, threw a large exhibition at Linn Benton Community College. This was complete with speaker Ayisha Elliot, DJ Big Cat Kirkwood, a Black-owned business expo, and even a vaccination clinic for those in need. Plenty of food, music and socializing brought the community together to celebrate Black history, talent and joy.

Simultaneously, there was an open house at Letitia Carson’s Land, as she was one of the first Black female settlers in Oregon in 1845. Tours of the land and archaeological site were accompanied by education and promotion of the Letitia Carson Legacy Project, an organization hoping to recreate the original homestead and make it into a place of learning, landworking, and leadership for Black and Indigenous populations in Oregon according to the Letitia Carson Legacy Project.

Independence Day in July isn’t going anywhere anytime soon. It is a cherished holiday in America, rife with both old customs and new ways of partying for the country’s sake.

Corvallis celebrated this year with a Fourth of July Parade and the “Red, White & Blue Riverfront Festival,” all the while making noise and waving flags to the strains of “The Star-Spangled Banner” plucked out on electric guitar.

At the festival, food trucks, live music and arts and crafts were only some of the events available for those attending. Fireworks ended the evening at 10 p.m.

Juneteenth, on the other hand, is still growing in velocity as activists demand more than just federal recognition of the holiday. Reparations for those once enslaved, and their families, is the next big step for the communities celebrated by the holiday.