Eco2go to resume ‘as soon as staffing allows’ 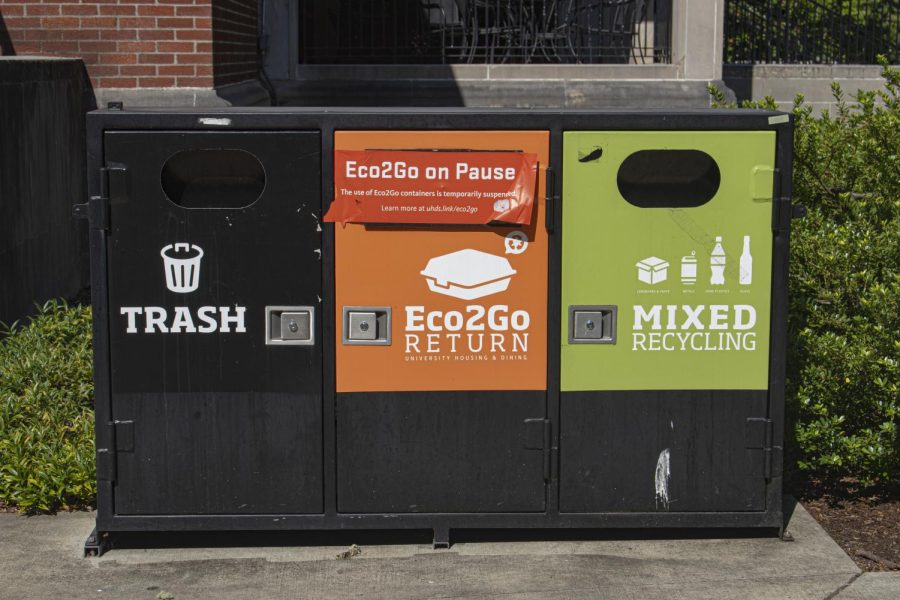 An Eco2Go dropoff location found in the Student Experience Center Plaza next to the Memorial Unit, photographed on July 26th, 2022. When the program first launched, OSU’s campus had only five dropoff boxes, expanding to 20 dropoff boxes later on.

Eco2Go is a University and Housing Dining Program which provides customers with reusable takeout containers. However, since the COVID-19 pandemic began, the program has been under temporary suspension.

Kerry Patterson, the director of campus dining and catering for the past nine years was a part of the team that first designed and implemented the Eco2Go containers.

“In 2012, UHDS began offering customers reusable Eco2Go containers as an opt-in pro-
gram for a fee,” Patterson said. “Then in 2015, we changed to the more recent format where all to-go entrée options are served in an Eco2Go container at no additional charge.”

Oregon State University estimated that within the first year of implementing Eco2Go they successfully kept 400,000 disposable containers from the landfill. Patterson admits that contributing to sustainability is a campus and student priority.

“We’re committed to re-implementing the Eco2Go program as soon as staffing allows,” Patterson said. “At this time, we’re actively engaged in recruiting for our dining team and are hopeful that will mean restarting the program over the coming months.”

Since the pandemic began in 2020, OSU has been using disposable containers.

The current containers used by UHDS are single-use molded fiber clamshell containers, according to Jaime Herrera, assistant director of dining and executive chef for UHDS.

The disposable containers were mostly available in dining halls and residence halls. “Pre-pandemic most of the cafes and food service areas operated by Memorial Union Retail Food Service did not utilize Eco2Go containers,” Patterson said.

“When we restart Eco2Go, we plan to include the cafes and other outlets that were formerly operated by MURFS,” Patterson said.

According to Anderson there are different recycling groups on campus that students can utilize while the program is suspended. There is Campus Recycling, student Eco-Reps, the Waste Watchers Club and the Sustainability Office.

“OSU’s Eco2Go program is one of the most progressive in the country. It provides an opportunity to save many tons of waste from the landfill,” Anderson said. “Our individual choices to reuse can have a large-scale impact.”