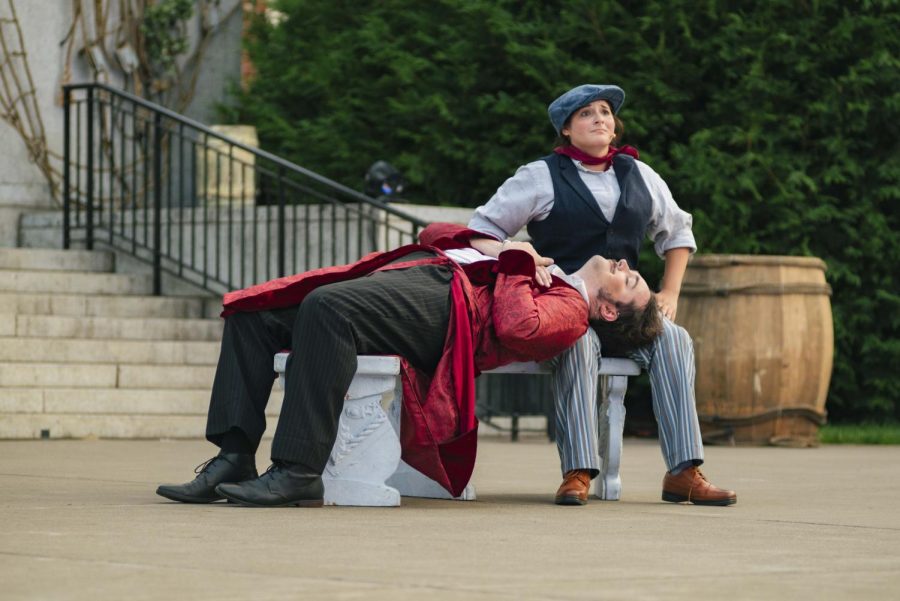 Actors began dress rehearsals for “Bard in the Quad” in front of the Memorial Union at Oregon State University in Corvallis, Ore. on July 31. “Bard in the Quad” began in 2006 and its mission is to present innovative, quality outdoor Shakespeare productions to the OSU campus.

Bringing together a mix of alumni, current students and community members, Bard in the Quad returns for its 17th season this summer to present the Shakesperian romp “Twelfth Night.”

“Twelfth Night” is one of Shakespeare’s most popular comedies, having inspired multiple films such as a direct adaptation in 1996 and the modernized version “She’s the Man” in 2006. It is also one of his most complex plays, following the misadventures of a shipwrecked young woman named Viola who disguises herself as a young man to gain a place in Duke Orsino’s court.

For senior Abrianna Aydee, who stars in her dream Shakespeare role of Viola, participating in “Twelfth Night” has been a long time coming.

“My high school was going to do it and auditions happened and then they were like ‘Oh, we’re going to another show instead,’” Aydee said. “I think she’s a really fun character. There’s kind of this reminiscence of how we all were in high school… It’s really nice to play a character that I think everyone finds a piece of themselves in.”

Aydee is joined by alumni cast members like Matthew Holland, who makes his return to the Bard in the Quad stage as Malvolio for his tenth performance since his 2007 debut. When asked what keeps him coming back after all these years, Holland emphasized his love for Shakespeare and the challenge that comes with it.

“I really love Bard and it just takes a lot of effort and sacrifice but the payoff is worth it and the challenge of doing the show is just so rewarding even more than just any normal show. It’s just so much more complicated out here, it’s so much bigger, you get to be so much bigger in your gestures and your actions. I just like it so much that I keep coming back,” Holland said.

Similar accounts from students are what drew Bard newcomer Dmitri Rose, who plays Feste, into getting involved with the show.

“I’d heard so many good things from people who have seen it and people who have been in it,”said Rose. “It’s pretty much all everybody talks about in the theater department throughout the year.”

This year’s run of “Twelfth Night” marks Oregon State University’s second showing of the play, helmed again by program coordinator Elizabeth Helman. “Twelfth Night” was the first Bard in the Quad show she had ever directed back in 2009, so returning to the play gave her an opportunity to make new stylistic choices suited to this year’s cast.

“When I did it in 2009, conceptually it was really inspired and looked back to the Commedia dell’arte roots of the play,” Helman said. “Shakespeare’s “Twelfth Night” was based on a [16th] century Italian short story and so I got inspired by a lot of these archetypes like Arlecchino and Pantalone, so all these characters had these very broad, stylized physicalities… It was very rough theater in the Peter Brooks sense. A little down and dirty, a little dark actually.”

According to Helman, this year’s version is a more lighthearted telling of the play and draws stylistic inspiration from fairy tales, describing it as “whimsical, Disney version of a go.” Audiences can expect to see costumes and set decor reminiscent of that in “Frozen” and “The Little Mermaid, ” keeping with that fairy tale seaside theme.

As rehearsals begin to come to a close and the first official performances begin, the “Twelfth Night” cast is eager to show off their work.

“It’s been coming together really well, over the last few days especially and the last couple of weeks. Things just start to click and it’s my favorite part of the process because you can really see people start to fall into place and realize things,” Rose said. “In every rehearsal everybody’s learning new things and creating their characters more and it’s really wonderful to witness and lovely to see. I’m really excited to see what our final creation is at the end of this big, long, stressful, complicated process.”

Admission prices are as follows: $17 for general admission, $12 for students and seniors, and $5 for OSU specific students. Seating is first come, first serve and discounted tickets can be purchased beforehand at bardinthequad.org.