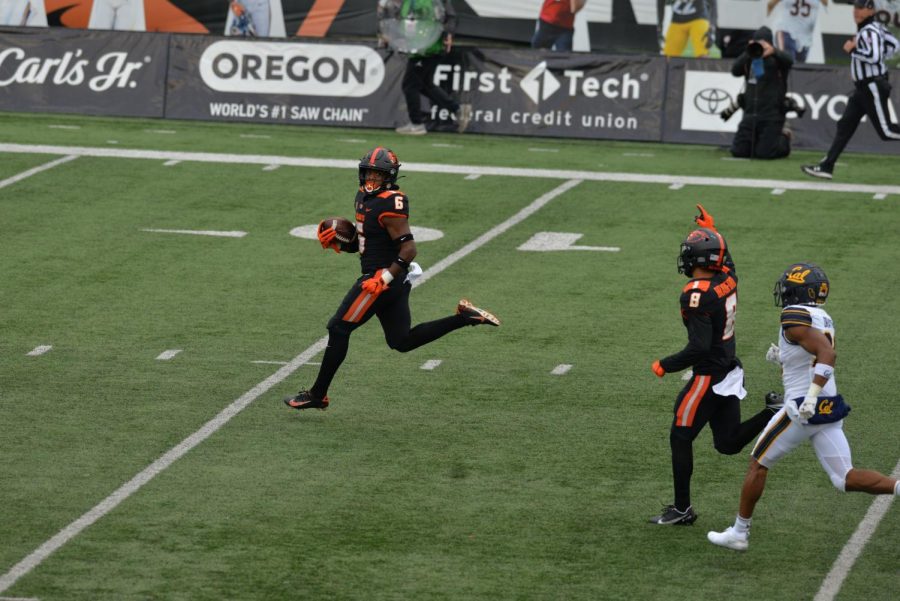 Oregon State University Running Back Jermar Jefferson looking back while breaking open a 75 yard touchdown for the opening play. Jefferson had 196 yards in Oregon State’s victory over the University of California Golden Bears.

The Oregon State Beavers got their first win of the season, as they defeated the California Golden Bears by the slim margin of 31-27. The Beavers now move to 1-2 on the season.

Oregon State came out firing, scoring two touchdowns on their first two drives, with junior running back Jermar Jefferson rushing 75 yards for a touchdown, and junior tight end Teagan Quitoriano catching a 35-yard reception from redshirt junior quarterback Tristan Gebbia one possession later, who finished the game 12 for 20 through the air with 147 yards, one touchdown, and two interceptions.

Gebbia also scored two touchdowns of his own, with one of them being an 8-yard reception, as the Beavers recreated the infamous “Philly Special” play in the fourth quarter. The other coming as the game’s final touchdown on a one-yard quarterback sneak to give the Beavers the lead.

The Golden Bears did not go down without a fight, however, as Golden Bears’ quarterback Chase Garbers was 28 for 42 and threw for 315 yards with three touchdowns and two interceptions– the second interception coming on Cal’s final possession, which sealed the win for Oregon State.

The Beavers will now turn their attention to next week, where they will face their in-state rival Oregon Ducks at Reser Stadium on November 27. Kickoff is scheduled for 4:00 p.m.