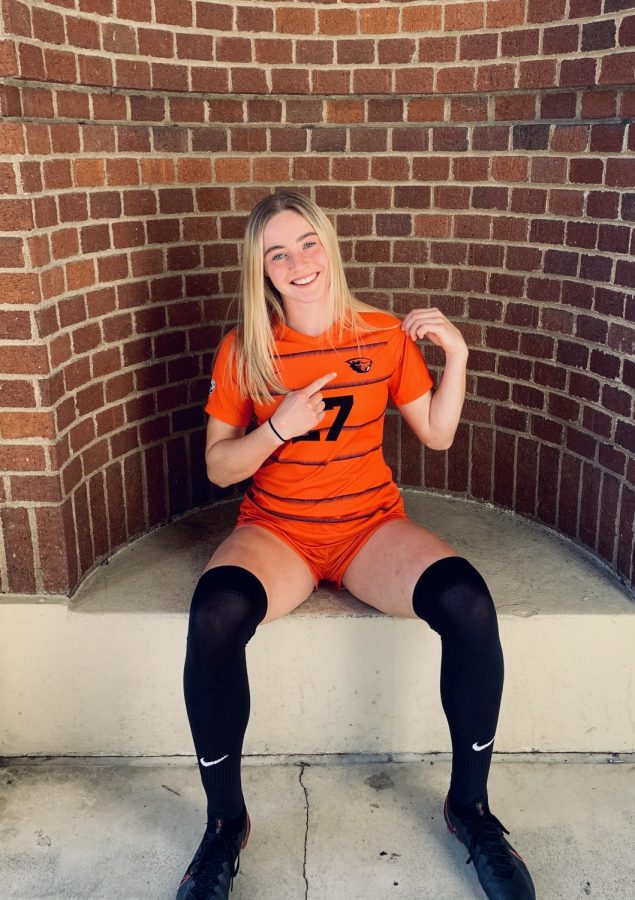 In this contributed photo, freshman forward for Oregon State Women's Soccer, Amber Jackson, is pictured in her team uniform.

Oregon State Women’s Soccer freshman, Amber ‘Action’ Jackson, has adapted to the obstacles of life as a college athlete living with type 1 diabetes.

At 7 years old, Jackson was diagnosed as diabetic. Caught early in her life, Jackson was lucky enough to be treated to what she felt was an easy diagnosis and a pleasurable hospital experience.

Type 1 diabetes is typically found first in young kids and occurs when the immune system attacks the cells that produce insulin in the pancreas. Because the body cannot replenish insulin fast enough, type 1 diabetics need to monitor blood sugar and take insulin through an insulin pump, a gadget that is attached to a tube in your abdomen.

Growing up, with help from her parents, Jackson’s diabetes was managed easily and effectively. Easily enough that, around middle school, Jackson started managing her disease herself, and kept it from preventing her early soccer career from taking off.

“Around eighth grade, I had started playing soccer at a little higher of a level, and that made me want to play college soccer,” Jackson said. “Honestly, I never really thought about diabetes in that goal, I wasn’t worried about it stopping me from doing that. It’s a challenge for sure, [but] if anything, it gave me a perspective because a lot of people with other illnesses can’t even move or play soccer, so to have the opportunity to be here is just incredible.”

However, Jackson’s journey from competitive youth soccer to Division 1 athlete was more than a one-woman show. The freshman credits much of her success to her family and how much support they have given her throughout the years, including moving to a new city to give Jackson the experience of public schooling.

“I love my parents and my brother, they’re supportive and incredible. We moved to a different city just so I could go to high school because I was homeschooled until that point,” Jackson said. “They wanted me to have public school experience before I went to college, so they basically picked up shop and moved to Sacramento, CA. so I could go to school and is where I started playing competitively.”

Jackson gives credit to her family for supporting her throughout her life and her early soccer career, a group that she says believed in her even while going through the experience of being a high school athlete with type 1 diabetes.

When arriving to Oregon State, Jackson noticed a similar support system from her teammates and coaches. Adapting to Jackson’s needs, Oregon State Athletic trainers and her team have worked to ensure her health and success.

“I love my team and my coaches,” Jackson said. “I didn’t know a lot of people before coming here or anyone on the team. We had to get here two months early in the summer and so we had a lot of bonding time and it was the best thing. Everyone is super supportive.”

Every day, Jackson wears what the team calls the ‘Beep Bop’ machine, which is her small insulin pump that analyzes her blood sugar levels.

“They’re all super nice and ask ‘Hows Beep Bop today?’ and ‘Do you need sugar?’, so that’s been really nice. They’re always checking in on me,” Jackson said.

Beyond checking on her in day-to-day interaction, Jackson’s coaches make sure to monitor her during practice as well. Jackson wears a monitor whenever she takes the field, which reports her blood sugar levels to her trainers and coaches, alerting them if Jackson ever needs to come out of the game.

“I also wear a DEXCOM, which is a continuous glucose monitor which is a site on the body that monitors blood sugar and sends the number to the pump or through an app on your phone,” Jackson said. “So during a game, I just wear that and it will go straight to my phone or my pump and my athletic trainer has the app for the DEXCOM 3.6 so she can tell my coach ‘hey, her blood sugars low she should come out’.”

For Jackson personally, she takes extra measures to be able to play at her full potential. Every day there are variables that play into working with diabetes, including and especially a strong consideration to nutrition.

“In order to make an impact on the field, I have to really be focused on my nutrition. I can eat whatever I want but it will affect my numbers differently, and the goal is to keep them steady so I need to watch what kind of food I eat and when I eat it,” Jackson said. “For example, if I have pasta the night before a game, which obviously you want to carbo-load before a game but for me, it spikes my numbers and makes them really weird.”

Though there are frustrating moments tackling type 1 diabetes, and managing those difficulties as a student-athlete Jackson continues to work to keep it all under her control.

“I would say that everyone has something in their life that is hard or challenging and those things are in our lives for a reason, and they make us who we are,” Jackson said. “I encourage those who are willing to take a couple of hits to embrace those challenges and face their fears of failure and chase their dreams. Shoot for the stars because the worst that could happen is getting higher than you are right now.”

Watch Amber ‘Action’ Jackson compete with the rest of OSU’s Women’s Soccer team as they are slated to play this coming Spring.