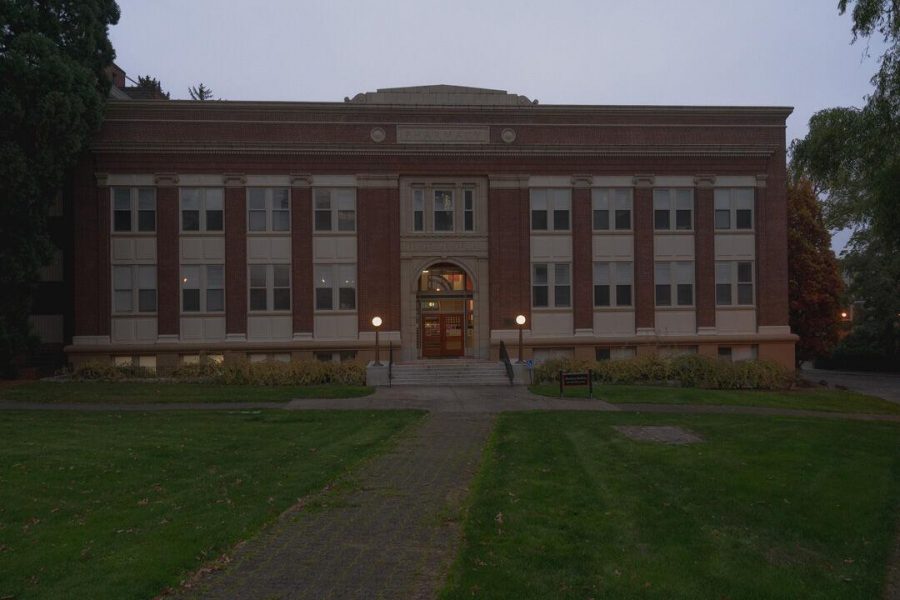 The Pharmacy building is located on campus at 1601 SW Jefferson Way, next to the Valley Library.

The pharmacy at Oregon State University has been shut down since June which is an impactful loss to the community and there are ongoing efforts to try to save and reopen it such as a petition that currently has over 3,800 signatures.

Jin Ballew, executive assistant to the dean in the College of Pharmacy, and Ty Triplett, second-year Pharm.D. student, give more insight into the reason behind the pharmacy’s closure and how this has affected those in the Corvallis community.

The immunizations being provided through the pharmacy was a crucial aspect of their business that has since been unavailable to students. A surge of Meningococcal B cases in Oregon in 2017 had caused an alarm to get vaccinated. This immunization is now also required by all incoming students in order to have their registration holds lifted. Flu vaccines are also in high demand during this pandemic and a potential COVID-19 vaccine in the future.

“The closure also impacts [Student Health Services] the student health center by removing a valuable resource for drug advice and administration of vaccines like flu shots, maintenance vaccines, and a potential COVID vaccine when the time comes,” Triplett said.

Ballew shares the several factors that the College of Pharmacy Leadership Team went into deciding to close the university’s pharmacy.

“Ongoing and growing subsidies were required to cover the cost of services and operations of the pharmacy in recent years, potentially compromising the educational mission of the College of Pharmacy,” Ballew said. “Initial efforts to optimize staffing and decrease non-personnel expenses were not successful in addressing budget shortfalls.”

Ballew said that the pharmacy had always been independent and operated as a self-supporting unit without direct financial support from student fees. There were alternative strategies explored to address financial deficits, but it became clear that those strategies would not be able to prevent the significant impact on the overall financial health of the College of Pharmacy and its educational, research and outreach missions.

Since the closure, there have been actions taken by the College of Pharmacy to further support students who use it.

“The pharmacy officially closed to students June 15, and beyond that much of the remaining staff was devoted to transferring prescriptions to other pharmacies and handling the logistics of closing a pharmacy,” Triplett said.

The on-campus pharmacy played a vital role as one of the resources available to students. This establishment was a useful asset to the community that has now been dismissed by the university.

The pharmacy’s closure affected students who were relying on its services. Students relied on the pharmacy for medical care and refilling medications and prescriptions, but now due to it being closed, they have to travel farther to get the same services. Dedicated pharmacists, technicians, and pharmacy students who worked at the pharmacy are also affected by its shutting down.

“I think this has had a major impact for students, especially those who live on campus and need to manage their prescriptions; they now have to go through the challenge of going off campus for their medications which can be difficult for first-year students who do not have access to a car,” Triplett said.

A program that has been in service to female students but is now reduced from the pharmacy’s shutdown is CCare. It was free to those who wanted to be enrolled in it but is now limited without the pharmacy. This program allowed students to have access to free hormonal contraceptives There is no other service that fulfills this program’s quantity and processing requirements.

“At this time, there are no concrete plans to reopen SHS Pharmacy,” Ballew said. “If there are opportunities in the future, we will work with stakeholders, including students, to make that decision.”