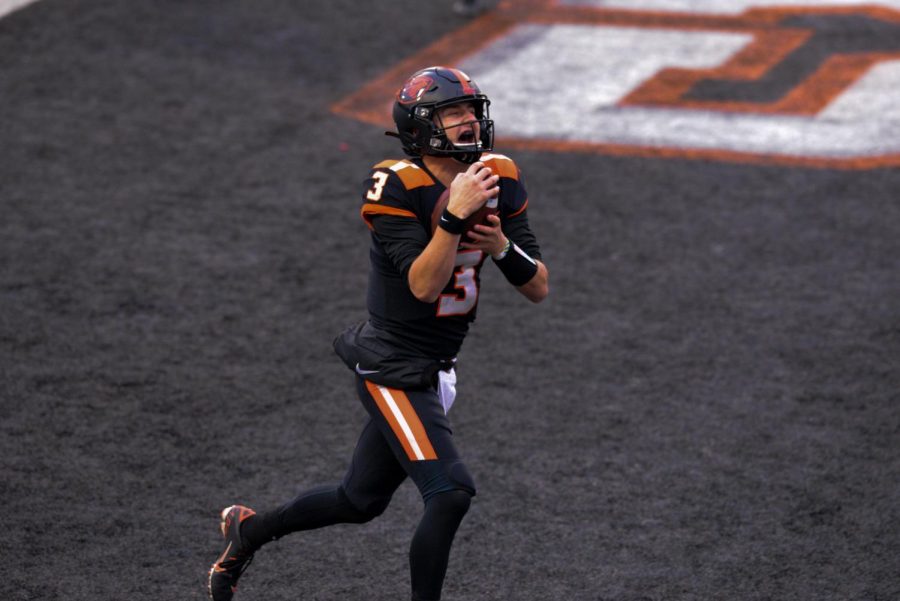 As the common saying goes, “It’s not about how you start the race, it’s how you finish it”. This might be the way Oregon State football hopes their season goes, after what was a rocky start.

After losing their first two games of the season, the Oregon State football team got their first win of 2020, defeating the California Golden Bears by a score of 31-27. To Beaver and Cal fans alike, the game was not for the faint of heart, as the lead between the two teams changed a total of four times throughout the game. But, after the smoke cleared, it was the Oregon State who came out on top.

The Beavers shined on all three phases of the game. On offense, Oregon State was able to score fast and execute some new plays. On defense, they were able to hold the Golden Bears down and were able to create some crucial turnovers. And on special teams, they were able to put the offense in good field position.

The Beavers drew first blood, and on the first play of the game. Junior running back Jermar Jefferson ran for 75 yards to score the first points of the game for either team. Jefferson would later have a similar play at the end of the game as well, this time rushing for 65 yards on Oregon State’s final drive to ultimately put the game out of reach.

Jefferson would go on to run the ball 18 times and rush for 196 yards, his highest yardage total of the season. With one touchdown already on his box score, Jefferson confessed that he wanted to score again on that 65-yard run in the fourth quarter, since he was all alone in the backfield. But he knew that it was better to run out of bounds and stop the clock, rather than reach the end zone and potentially give the Golden Bears another chance to score.

Jefferson credits this accomplishment to never being satisfied with who he is as a player, believing that there is always something more to improve on, even if he has to find it.

“I come to practice every day, keep working, trying to find new things that I’m bad on to work on, and just keep trying to come back to practice and keep getting better,” Jefferson said.

Jefferson wasn’t the only Beaver to score a touchdown on a one-play drive. Later in the first quarter, redshirt junior quarterback Tristan Gebbia would complete a 35-yard reception to junior tight end Teagan Quitoriano, increasing the lead for Oregon State to 14-7. Quitoriano, who had four catches for 65 yards and a touchdown, gave credit to Gebbia for the completion, and said that the two work well together.

“I couldn’t believe it,” Quitoriano said. “I just caught the ball, tried to get vertical. Tristan [Gebbia], he put a good ball right over my shoulder on the one that I got in the endzone. I just work off him.”

Gebbia himself had a solid showing, contributing three touchdowns in three different roles. Through the air, the quarterback finished 12 for 20, passing for 147 yards with one touchdown, and two interceptions. But in this game, Gebbia was on both ends of the ball, passing and catching for a touchdown of his own.

The touchdown catch happened early in the fourth quarter. After a direct snap to Gebbia, the quarterback pitched the ball to the redshirt junior running back B.J. Baylor, who ran to his left. Baylor, while running left, then pitched the ball back to redshirt junior Tyjon Lindsey, who ran to his right. Lindsey then threw the ball to a wide-open Gebbia in the endzone, who would catch the ball, and gave the Beavers the lead once again early in the fourth quarter.

The play was reminiscent of the ‘Philly Special’, a play that was called by the Philadelphia Eagles when they faced off against the New England Patriots in Super Bowl 52. The trick play put Gebbia in some rare company, making him the 11th Pac-12 player to run, pass, and catch a touchdown in the same game since 1996.

With this game being the first time that he had ever caught a touchdown pass, Gebbia only had one word to describe the experience: Cool.

“That was definitely the first time I ever caught a touchdown pass, so that was pretty cool,” Gebbia said.

And coincidentally enough, it was Lindsey who threw the touchdown pass– Gebbia’s teammate and roommate for his freshman year of college, when both of them were at the University of Nebraska. That touchdown pass happened to be the first touchdown connection of the duo.

“Me and Tyjon [Lindsey] went to college together, obviously, and we were roommates our freshman year,” Gebbia said. “And I said to him on the side, I said ‘Who would’ve thought that our first touchdown connection would be you throwing at me?’”

Even Qutoriano made a comment about the play, saying that Gebbia had been practicing his catches for quite some time.

“I mean, he’s got hands, I’m not gonna lie. He catches in practice a little bit,” Quitoriano said.

Defensively, Oregon State put together an impressive game as well. Redshirt junior linebacker Avery Roberts, who recorded 10 total tackles, with 2 tackles for loss and 0.5 sacks, said that he knew that the Golden Bears were going to run the ball, so the defense’s main goal was to make them want to throw the ball more. And it worked.

“We knew they were going to come out and try and run the ball, so we had to stop the run and make them one-dimensional,” Roberts said. “And I felt like we did that.”

Roberts gave credit to two of his teammates for making game-changing plays for the Beavers. The first player was junior defensive back Nahshon Wright, who intercepted a pass that was thrown by Golden Bears quarterback Chase Garbers in the endzone in the second quarter, which resulted in a touchback. The second player was redshirt freshman defensive back Akili Arnold, who was able to deflect a pass from Garbers, which led to an interception by junior outside linebacker John McCartan in the fourth quarter. It was this interception that took the ball from the Golden Bears in the final minutes of the game, securing the win for Oregon State.

“Those are big-time plays,” Roberts said. “They changed the game, and we needed them. We got them where we needed them. And that was the biggest part of Nahshon [Wright] and Akili [Arnold]. They stepped up for us.”

But it wasn’t just the offense and the defense that stepped up for the Beavers. Special teams also played a critical role in Oregon State’s first win of the season. More particularly, it was redshirt sophomore wide receiver Jesiah Irish who stepped up big.

Late in the fourth quarter, the Beavers were facing a 27-24 deficit. After forcing a three and out on defense, the Golden Bears lined up to punt, but Irish was able to slip past the defenders, managed to stick his hand out, and blocked the punt. Irish was able to position the offense at the 15-yard line, which set Oregon State up in the red zone for their final scoring drive of the game.

Surely, many different emotions were running through Irish’s head. Excitement, intensity, confidence. But Irish couldn’t quite string the words to describe this experience, saying that it was life-changing.

“There’s no words to really explain that feeling, and you can only rep that one time, so it’s kind of a life-changing experience,” Irish said.

All in all, Oregon State stepped up in all three phases, offense, defense, and special teams. And Head Coach Jonathan Smith had nothing but kind remarks to say about the team’s performance.

“I’m just really proud of our guys,” Smith said. “That was a hard fought game, back and forth momentum swings. We did talk about [that] it was going to be a four quarter game. Going off of last year’s game against Cal, it came down to the last minute. Our first couple games this year have come down to the fourth quarter, so really just proud and happy for these guys. They’ve been working really hard, continuing to  believe, and they compete for four quarters.”

The phrase, “four-quarter game”, came up on more than one occasion. Gebbia mentioned this phrase when asked about his two interceptions during the game.

“It’s a four-quarter fight,” Gebbia said. “I made a mistake, and that’s part of the game, I’m learning. I’m just going to keep growing and learning, and you never want to put your team in that position. I love this team with all my heart, and I want to do everything that I can to put us in a good position to win because these guys deserve it. They come in here every day and they work so hard. So making mistakes like that definitely is hard to overcome. But, I just kept thinking that it’s a four-quarter fight.”

In the eyes of Gebbia, he sees this teamwork as the start of something special as the Beavers progress throughout the season.

“Football is the ultimate team game. So to see those guys and see guys that come in here and work so hard, and our coaching staff that work so hard, and really just have so much love and passion for the game,” Gebbia said. “For all of us to come out on top, and the special teams and the defense really helping us out in a lot of places, I think this is some momentum that we can carry into the rest of the season.”

With one win already in the books, the Oregon State Beavers will look to get their second win of the season as they face the in-state rival Oregon Ducks on Nov. 27 at 4:00 p.m. at Reser Stadium.