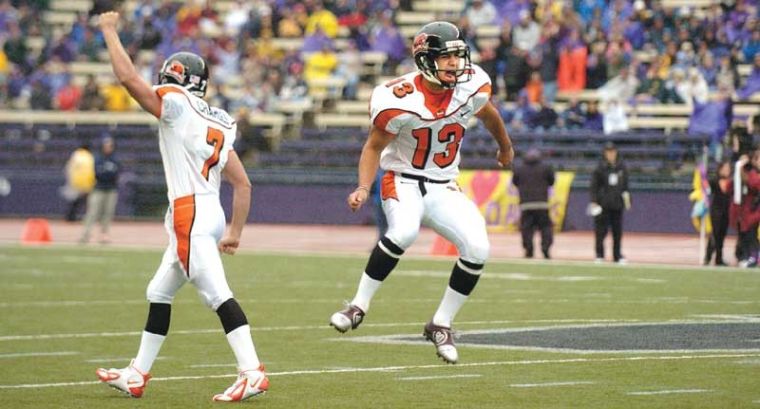 A former Oregon State football legend, college award winner, and former kicker in the Canadian Football League is now working to ensure the university’s current gridiron stars have a bright future ahead of them.

Alexis Serna might best be known for his storybook career as OSU’s placekicker from 2004-07, which culminated in a Lou Groza award in 2005, a trophy awarded to the best placekicker in college football. Now, Serna serves as the Director of Oregon State’s Beyond Football program.

Beyond Football was created in 2012 and serves to help student-athletes transition from their playing careers into the professional workforce. In his role as Director, Serna helps to create career paths for the school’s football players.

“The biggest thing for us is to prepare them for life after football,” Serna said. “I work with them by helping them with their resumes, talking to them about interviews, connecting them with different companies.”

Between athletics and academics, life as a student-athlete is packed with two full-time roles. Serna wants to ensure that once their collegiate career is over, OSU’s football players will be able to find continued success– whether that be in the NFL or the workforce.

“The way I look at it, they’re putting in a lot of time and effort for OSU playing here and putting in blood, sweat and tears,” Serna said. “I want to be able to reciprocate the amount of energy that they put into the university while they’re here. I don’t want them to feel lost once they’re gone. I want to be able to stay connected with them and be that resource for them.”

Following his time as a player at OSU, Serna played for three seasons in the Canadian Football League. But once his playing days were over, he quickly found himself without a job.

“I did go through that transition [from being an athlete to the workforce] and it was hard. I ended up on unemployment at one point,” Serna said. “It was a struggle to realize that this could happen to anybody. It doesn’t matter if you were an All-American, you can hit rock bottom.”

However, Serna did eventually find work as an assistant manager at a paint company, where he eventually became an outside sales representative. While he admits he never expected to work in paint sales, the job became one that he enjoyed.

Through his experience at the paint company, Serna learned that sometimes the career one ends up loving can be the one they least expected. In his current role with Beyond Football, Serna looks to share this lesson with others.

While Serna hopes that all members of the football team have a goal of someday reaching the NFL and can achieve their goals, he is ready to help should a player need to find a new calling in life.

“The players, I look at them as little brothers,” Serna said. “I want to make sure to take care of them. They’re family.”