A brief history of Benny the Beaver 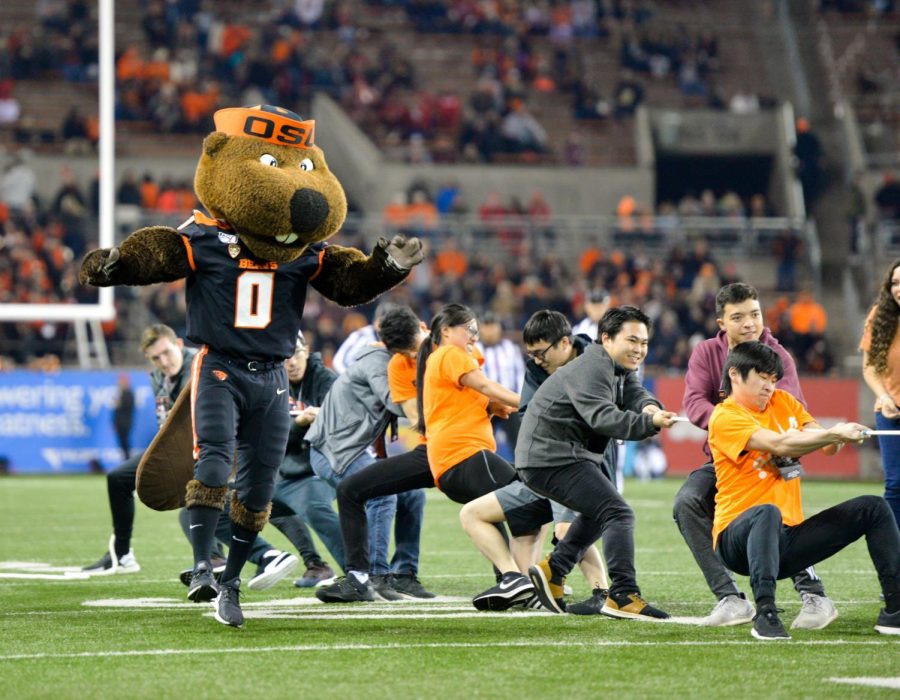 Benny the Beaver encourages students during their tug-of-war battle.

Correction: A version of this article published on Oct. 5 had incorrectly stated the biographical information of Ken Austin, a former Oregon State student.

From being the Beavers hype-man to engaging with members of the community, Benny the Beaver has represented Oregon State and its fans for the last 60 years as the university’s mascot.

The first instance of a Beaver mascot representing the school came nearly a century ago. Oregon State had recognized the Beavers as a team name by 1910, but it wasn’t until 1921 that the university landed on a beaver as their mascot.

Beavo, the official first beaver mascot of the university, was a live beaver found by students on a canoeing trip down Mary’s River in Corvallis, Ore. These students took in Beavo, who was found starving near the river, and nursed it back to health. After this instance, “Billy” Beaver emerged.

Billy Beaver was another live beaver that was under the care of OSU’s Wildlife Club. This was the first beaver to be clearly marked as Oregon State’s new “beaver mascot,” according to Oregon State archives. Billy was the first beaver to be featured as a cartoon and published in newspapers and other publications, including The Daily Barometer. The cartoon of Billy enunciated a kind face for a mascot, which was later changed in the ’90s to become what was called the “Angry” Beaver.

The first reference to “Benny,” Oregon State’s current day mascot, was in 1941-42 where the name ‘Benny Beaver’ is listed on Page 14 of the school yearbook. The picture of Benny was a metal beaver statue surrounded by students during homecoming. The name change is thought to be credited to the cheer squad at the time, but this information has not been confirmed.

In 1952, Ken Austin was the first student to appear dressed as “Benny Beaver” for athletic events. His costume, although not quite as pristine as today’s version of Benny, gave Oregon State a glimpse at what athletic events could look like with Benny on the sidelines. Once graduated, Austin founded A-dec, one of the world’s largest manufacturers of dental equipment based in Newberg, Ore.

The early ’80s through the mid-’90s brought a new face for fans to get to know, Bernice Beaver, the first and only female beaver mascot at Oregon State to this day. Having Bernice gave Oregon State the distinction of having the only male and female mascot duo in NCAA history. The pair was became known at the time for wearing wedding attire at all of the games, with Benny in a tux and Bernice in a wedding dress.

Since then, Oregon State has redesigned Benny into a fiercer logo. Constructing the friendlier, more gentle logo of ‘Retro Benny’ into a more athletic and sleek design, the “Angry” beaver or appeared. This logo remains to be Oregon State’s official athletic mascot though the university still produces merchandise and pays homage to “Retro Benny” to support the history of OSU.

As the university expands, Benny the Beaver as managed to stick around through it all. And, as Oregon State fan Marvin “Beaverman” Yonamine views it, the mascot represents more than just the team name.

“Benny Beaver represents all the good that Oregon State stands for,” Yonamine said. “The pride, the tradition, the passion, the energy and the love for all this Oregon State University.”