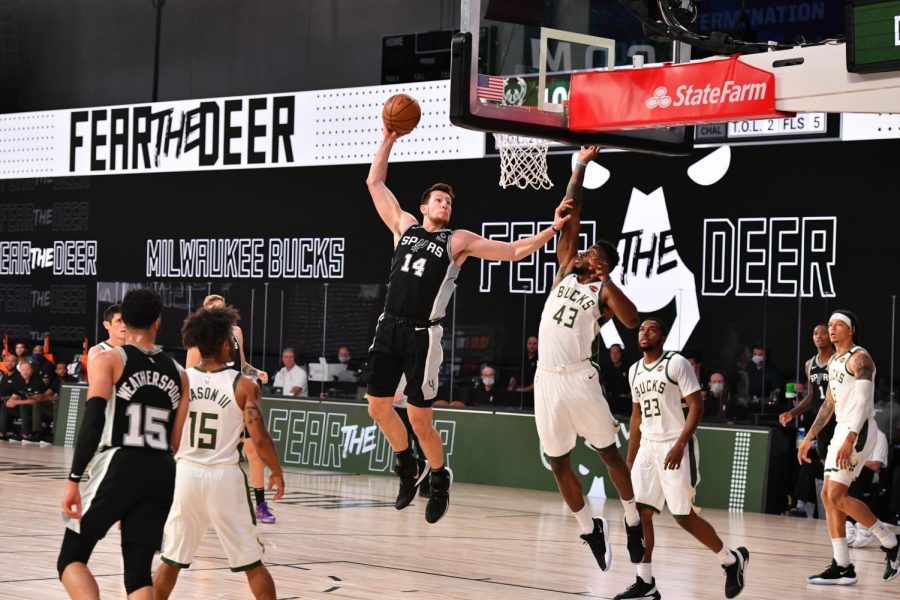 Former Oregon State Beavers’ basketball star Drew Eubanks may now be playing in the NBA for the San Antonio Spurs, but he has not forgotten his Oregon roots.

That’s why Eubanks, the 23-year old Troutdale, Ore. native, has launched a new fundraising campaign to help those devastated by Oregon’s wildfires.

Eubanks recently partnered with Portland Gear, an Oregon based apparel brand, to launch the “Heart for Oregon” campaign, which donates all proceeds of t-shirt and sticker sales to the Portland Food Bank. Each t-shirt costs $30, which is enough to provide 60 meals to affected families.

“I reached out to them because I had seen that they were raising money,” Eubanks said. “I decided to hop on and hoped that with my following we could raise a lot. Portland Gear did a great job of designing the shirt and spreading awareness. Hopefully, we can continue to raise money for the food bank.”

While Eubanks now lives in San Antonio, he is all too familiar with the wildfires that have plagued his home state. Eubanks’ fiance’s parents reside in Oregon City and made the decision to evacuate after their home was placed under Phase 2 status due to nearby fires.

“They didn’t need to evacuate but if things got worse they might not have had time to evacuate if they needed to,” Eubanks said. “That was a scary thing to go through to just because it’s her family and there’s not a lot of things I could do from here.”

Eubanks also recalled the 2017 Eagle Creek Fire that ravaged the Columbia River Gorge, which affected his family in Troutdale.

“That ended up destroying a lot of nature out that way and I couldn’t do anything about it because I was at Oregon State and didn’t have the platform to get a lot of people’s attention,” Eubanks said. “But now I’m representing two different states, two different cities, and have a much bigger platform to be able to try to help people when I can.”

A Bright Future Ahead

On the basketball court, Eubanks saw plenty of action late in the season and made a solid case to turn his two-way contract into a full-time roster spot heading into the 2021 NBA season.

Eubanks began to accrue more playing time with the Spurs as the year progressed, due in part to injuries sustained by power forwards LaMarcus Aldridge and Trey Lyles. With the opportunity, Eubanks proved himself to be a valuable asset to the team.

In particular, Eubanks started to see heavier playing time in the San Antonio lineup once the league moved to the NBA Bubble in Orlando, Florida. In the eight games played by the Spurs once the league resumed their season after a nearly four-month delay due to the global COVID pandemic, Eubanks made appearances in all eight games.

From there, Eubanks showcased his value as a high-efficiency scorer, making over half of his field-goal attempts in six of his final eight games, including a 75% field goal percentage on a career-high 12 points in a game against the Nuggets. Eubanks’ skill as a rebounder was also made apparent, totaling over five boards in each of his final seven appearances and averaging 6.3 rebounds per game during that final eight-game stretch.

This solid performance at the end of the year has Eubanks excited for next season.

“It had been a long time coming,” Eubanks said. “I’ve worked hard in the G League by trying to prove and show to the coaches that I do what I know. As a young player, there’s going to be times where you mess up and things get a little bit rough, but I knew if I was up in San Antonio consistently that I was going to learn and catch on. That’s what I feel like I was able to do.”

(Heart for Oregon shirts and stickers can be purchased at https://portlandgear.com/collections/heart-for-oregon)