A breakdown of the Oregon State athletics budget, how much comes from student fees 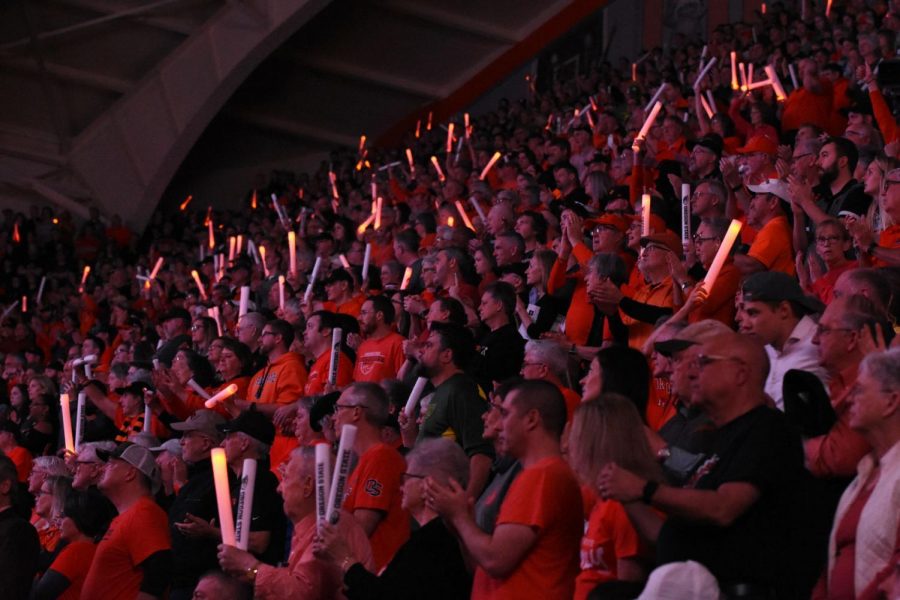 Fans support the OSU Women’s Basketball team in their home Civil War matchup versus Oregon on Jan. 26. Gill Coliseum hosted over 9,000 fans for the game, including an experimental student section for approximately 400 students. All other students sat in general admission designated sections.Photo from Orange Media Network Archives

For the 2020-21 academic year, Oregon State University has estimated the cost of tuition for a resident undergraduate student at $12,165– an increase of over $400 from 2019, leaving some to look for ways to cut the bloat.

Especially in a year where the coronavirus pandemic has made the majority of classes at Oregon State online throughout the Fall and Winter terms with no tuition decrease, some students and parents have looked at where to trim costs. Oregon State parent Kathy Atkinson suggests that the portion of the athletics budget that comes from OSU students could be cut in order to make college more affordable.

“I think college athletics is all about money and I don’t know who that money goes to,” Atkinson said via direct message. “The whole athletic scene benefits a small amount of students and too many schools don’t expect academic excellence of their athletes. Tuition is high enough and shouldn’t go to athletics where very few can participate.”

Atkinson’s concern, alongside the increased cost of tuition calls into question how much of an OSU student’s tuition goes directly towards athletics. One of the people in charge of it all, Jacque Bruns, the Senior Associate Athletic Director and Chief Financial Officer for Oregon State’s athletic department, helped break down the specifics of the athletics budget to help answer the question.

“Athletics has an $80 million annual revenue budget with 47% from PAC-12, media, and NCAA distributions, 11% from ticket sales, 29% from other revenues and gifts, 10% from the education and general allowance, and 3% from student fees,” said Bruns via email.

Between student fees and education allowance, 13% of the athletics budget at Oregon State comes out of student tuition in any way. According to Bruns, the other 87% is generated by the department on its own, as well as outside revenues and contributions.

The majority of the athletics budget that comes from tuition is the 10% that comes out of the general allowance budget of the school, or the total amount that the school receives from tuition and state funding to spread across its various facilities. Between all its departments, colleges and services, Oregon State’s general allowance budget totals at just over 580 million dollars, while the athletics department receives about 7,750,000 of those dollars.

Some people, like Atkinson, have expressed that they still are not fond of student’s tuition being directed towards athletics, even in smaller percentages, not want their money going towards something that does not have a direct impact on a student’s academic performance.

“I’m glad to hear that most money [for the athletics department] comes from outside but still find sports unnecessary for a good college experience,” said Atkinson.

However, Bruns argues that the cost of tuition being directed towards athletics can be considered a benefit of the student experience, saying that the money is actually used to “provide free access to athletics events for students.” This is in reference to the fact that Oregon State students are able to get tickets to any Beavers game of any sport completely free, a service that was used by nearly 13,000 students last fall.

Entry to games as one of the extracurricular benefits that students get for attending Oregon State is only what the student fees are paying for, not what the allocation that comes from the general school budget pays for. In regards to that, one has to look for what athletics provides to the school as a whole.

The biggest impact is on marketing the school as a whole. This is what’s known as the “Flutie Effect” coined after Doug Flutie, a quarterback for the Boston College Eagles. His last-second hail mary to beat the Miami Hurricanes in 1984 made national headlines for his school, and in the two years following, the university saw their applications increase by 30%.

Bruns and Senior Associate Athletic Director Kimya Massey mention this general concept in their Athletics Budget Rationale Document for this year where the athletics department had to justify why they get money from student fees to the Student Fees Committee that determines the final amount for student fees.

In addition to marketing and social benefits, Bruns also spoke on her belief that athletics also provides scholarships of multiple different values for many of their student-athletes.

“The NCAA allows for 263 scholarships with limits in specific sports and programs.  Many of the 500+ student-athletes have only partial or no scholarships,” Bruns said. “The total scholarship funding for this year (and all scholarships are being fully funded regardless of game schedules) is about $12.2 million.”

The coronavirus pandemic is putting all this at risk, with programs being cut across the country. Stanford University has cut 11 sports due to budget cuts brought on by the pandemic, and even big sports at big schools such as baseball at Boise State have been cut in addition to many more programs across the country.

Luckily, both adherents and opponents of college athletics can rest easy, as Oregon State is not currently in a position to cut any of their athletics programs, as it is already at the minimum of 16 programs to keep the university at the FBS level.

Amidst changes in the standard operations of Oregon State’s athletic programs as they adjust to life with fewer fans and less revenue, the athletics department has looked to save money to prevent a shortage to the budget.

“The changes to the season have left a significant operating deficit in athletics this year because of reduced ticket revenues, gifts, and conference distributions,” Bruns said. “It has not changed the amount of funding from the university. Athletics is making significant expense reductions, including some layoffs, and is looking for other measures to close that deficit.”

College athletics is an institution with a lot of money involved in it and that is both impacted by and in turn, impacts other aspects of college life as well. For now, those other aspects are funded, in part, by student tuition.