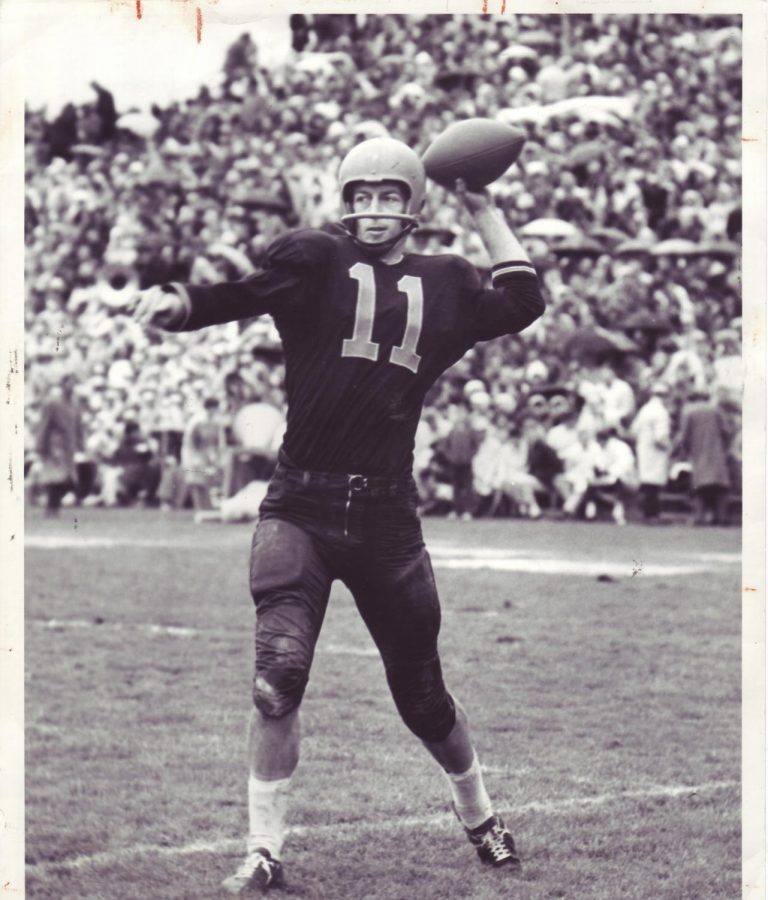 Former Oregon State quarterback Terry Baker. Baker would go on to win a Heisman Trophy with the Beavers in 1962, as well as making an appearance in the Final Four with the men's basketball team a few months later.Photo contributed by Oregon State Athletics

Terry Baker, a former Oregon State Beavers football and basketball player, does not have to imagine. To this day, he’s the only person in the history of college sports to win a Heisman trophy and play in a Final Four game of the NCAA basketball tournament in NCAA history, and he did both in the same academic year to boot.

When the 2020 versions of the Oregon State football and men’s basketball teams return to action on Nov. 7 and Nov. 25 respectively, the players will be hoping to replicate a level of team and individual success that they have yet to achieve since Baker’s 1962 season.

To this day, Beavers’ football has yet to produce another Heisman winner, awarded to the best player in college football. While the men’s basketball team has not made a Final Four appearance since Baker’s last season with the team.

Baker’s accomplishments, through a variety of athletics, compare to many of the other well known two-sport stars. Deion Sanders, the only person to ever play in a World Series and a Super Bowl. Bo Jackson, another Heisman winner who also played in the MLB. Jim Thorpe, an inductee into both the Pro and College Football Halls of Fame as well as an Olympic gold medalist in track. Yet Baker’s accomplishments remain less-discussed compared to other great two-sport athletes.

Last year, Athlon Sports released a list titled the “70 Best Two-Sport Athletes of All Time.” Sanders, Jackson, and Thorpe all placed in the top ten on Athlon’s rankings, while Baker was not featured on the list. Baker himself takes no offense at the exclusion, however.

“Most people today weren’t alive when all that happened,” Baker said with a chuckle.

Baker’s unprecedented run at Oregon State was not the beginning of his athletic achievements, however. The future Heisman winner went to Jefferson High School in Portland, Ore. and was a standout three-way athlete for basketball, football, and even baseball. He was widely recruited by big schools on the West Coast, as well as a handful of Ivy League colleges. However, despite the efforts of other big-name schools, Baker enrolled at Oregon State, and joined the Beavers’ football and basketball teams as a sophomore in 1960.

Baker came to Oregon State on a basketball scholarship with the intention to also play on the baseball team, but never set out to play football when first arriving on campus. Yet, in his freshman year, he wasn’t able to practice with the baseball team at all– and all because of continued rain.

“It rained what seemed like every day,” Baker said. “I don’t recall ever getting a game in while I was on that team.”

The Beavers’ head football coach Tommy Prothro took the opportunity provided from the delayed baseball season to recruit Baker, asking some of Baker’s friends convince him to go to a football team meeting. There, Prothro revealed the depth chart to the team, with Baker listed as the second-string tailback, which was essentially the quarterback in the single-wing formation the team played at the time.

“So I’m [listed as a] second-string tailback, and I haven’t even gone out for football,” Baker said. “It kind of went to my head I guess, so I dropped out of playing baseball.”

Prothro, an accomplished coach who led Oregon State to the Rose Bowl twice during the 1950s and 1960s, thus convinced the future Heisman winner onto the team. If it were not for the Oregon rain and Prothro’s insistence, Baker probably would have never played college football, a sport he was later enshrined in the Hall of Fame of.

Prothro wasn’t the only great coach in Corvallis at the time though. The men’s basketball team that Baker was a point guard for was led by coach Slats Gill, who led Oregon State to both Final Four appearances in program history.

Baker had high praise for both coaches, claiming that each was able to make their teams more than the sum of its parts, all with drastically different personalities and styles of leadership.

Although the coaches were different, Baker was able to carry many skills from the court onto the field and vice versa. From football to basketball, Baker brought the toughness that’s needed on the gridiron. From basketball to football, he turned the moves that were needed to get open on the court to juke defenders out on the field.

“If I got into the field and there was just a defensive back and me I’d put the same moves on him that I’d put on someone in basketball,” Baker said.

Baker was a player who consistently improved in his career in both sports. After struggling a bit as a passer in his first two years with a total of eight touchdown passes and 20 interceptions and not breaking 1,000 yards passing in either season he blew up as a senior in 1962.

Baker’s early-career struggles could potentially be attributed to an offensive change in between his first year as a sophomore and his junior year. Prothro’s offense switched from that single-wing to a wing-T formation, one that uses a more legitimate quarterback under center instead of a tailback. Year two of the new formation was Baker’s senior year, where his production skyrocketed.

Baker threw for over 1,700 yards and threw 15 touchdown passes compared to only five interceptions. He also added over 500 yards and nine touchdowns on the ground, giving the quarterback the most total yards out of anyone in the country that year. To top it all off, Baker even punted 33 times with a 37.3 yards per punt average in his senior year.

All of his efforts and accolades earned Baker the Heisman. His main rivals were Jerry Stovall, a defensive back of the LSU Tigers and Bob Bell, a defensive tackle for the Minnesota Golden Gophers. Baker was the first-ever player from a school west of Texas to win the award. The award thus surprised even Baker himself.

“It had never ever crossed my mind during the season that I might win the Heisman trophy,” Baker said. “When it occurred it was a total surprise to me.”

With his help, the Beavers finished the regular season with a record of 8-2 and got invited to only their third ever bowl in program history. This was the Liberty Bowl, which they played against the Villanova Wildcats. In that game, Baker broke the NCAA record with a 99-yard run for a touchdown.

However, that record play is embroiled in mystery. On the 50th anniversary dinner of the bowl win, Baker wanted to honor everyone who was on the field during the play. Yet no one could remember for sure which members of the team participated. Furthermore, no one could figure out who called the play, and even Baker himself was not sure it was the best idea at the time.

“I’ve always maintained it was a dumb play to call,” Baker said. “You don’t ever run from the one-foot line.”

Despite Baker’s doubts, that was the only score in a 6-0 Oregon State win, which gave the program only their second bowl win ever.

After that season, Baker was drafted as the first overall selection in the NFL draft by the Los Angeles Rams. To this day he is the only Beaver football player to be drafted at number one overall.

Baker also excelled and improved each year in basketball. He scored 7.4 points in his first year on the team as a sophomore. He increased that points total to 10.7 in his junior year and helped lead the team to the Elite Eight. In his senior year, he improved his output once again, this time to 13.4 points. His point contributions to that Final Four team of the 1962-63 season were second on the team only to eventual NBA Champion Mel Counts.

Baker helped the Beavers make it to their second-ever Final Four that year, where they eventually lost to the two-time defending champions Cincinnati Bearcats. Oregon State then lost again in the third-place game to the Duke Blue Devils to finish the tournament in fourth place. Regardless, Baker has fond memories of that achievement just as much as anything he achieved in football.

“Going to the Final Four was certainly a big event,” Baker said. “It capped off a good career for me personally and for our whole team.”

Due to his achievements in both football and basketball that year, Baker won the Sports Illustrated Sportsperson of the Year award. He was the only college football player to ever win it, a feat that still stands to this day.

Once Baker’s career in the NFL came to an end, he used his Mechanical Engineering degree to get into law school and worked as a lawyer until 2012.

While his achievements are from a long time ago, Terry Baker’s feats still speak volumes. He achieved the highest individual accolade one can get as a college football player, while simultaneously leading the Beavers to a Final Four in basketball. Even to this day, no one else can say that.