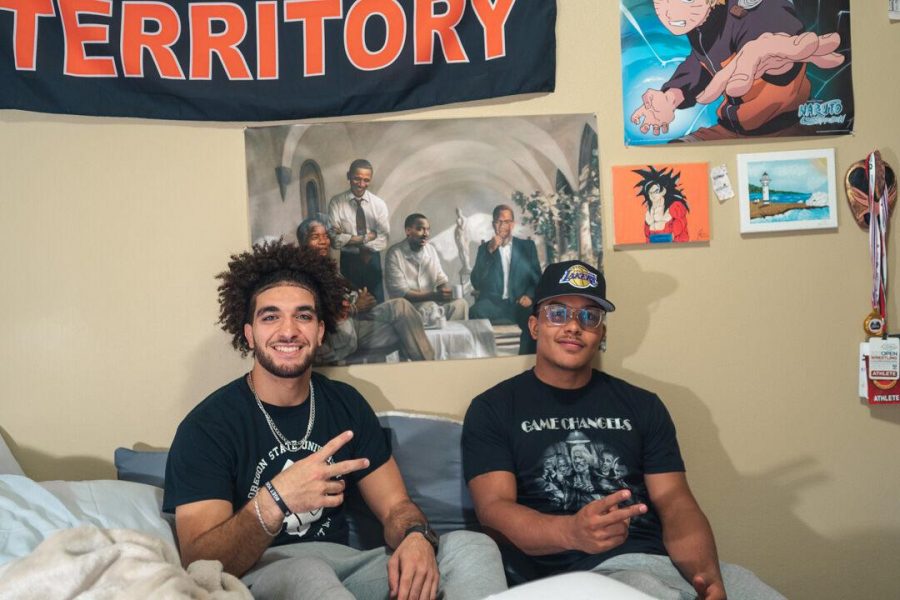 Roommates and OSU senior wrestlers Adam Rateb (left) and Mateo Olmos (right) pictured in Adam’s bedroom behind his favorite poster of his idols. Adam and Mateo participated in the Black Lives Matter rally in Washington DC this past summer.

It was only 57 years ago when the late Martin Luther King Jr. gave his famous “I Have A Dream” speech at the March on Washington for Jobs and Freedom on Aug. 28, 1963.

Ever since then, every year on that exact date, thousands of people gather in Washington D.C. to celebrate and honor the legacy that Martin Luther King Jr. left behind. This year was no exception, as senior Adam Rateb, senior Devan Turner, and junior Mateo Olmos, student-athletes with the Oregon State Beavers wrestling team, all traveled to Washington D.C. to participate in the annual March on Washington.

The idea to attend the march was sparked by Jason Jamal Dorsette, a mentor for Rateb, Turner, and Olmos. The four of them all work with local chapters of the National Association of the Advancement of Colored People.

“Mateo and I are members of the NAACP. I’m the President, Mateo is the vice president,” Rateb said. “We do a lot partnering with the local Corvallis-Albany Branch. After a big year for civil rights movements, they decided it would be good for us to go represent our school at the March on Washington. Jason Jamal Dorsette, he kinda put everything together for us. He’s an active member of the branch. He’s the one who made it all possible.”

Although all three have played roles in organizing and participating in protests that have happened across the state of Oregon, this was the first time that Rateb, Turner, and Olmos had attended the March on Washington. In not knowing what to expect when it came to the out-of-state march, having only attended protests within Oregon, the three wrestlers were left some fear and uncertainty.

“I thought it was going to go so wrong and dangerous,” Turner said. “That’s one of the biggest things that was on my mind. Our coaches were worried about everything, [and] all of our moms were just putting it into our head just to be safe.”

The first night they landed in D.C., the three were surprised by how acclimated everyone was to the idea of protests happening on a daily basis.

“D.C. is one of the cities that hasn’t stopped [protesting]. Oakland hasn’t stopped, Portland hasn’t stopped, Atlanta hasn’t stopped,” Rateb said. “We got to our hotel late on the first night. And we were just going to get pizza from a local pizza spot we had heard about. And while we were waiting for the pizza, this protest of everybody on bikes showed up. Probably a couple thousand people riding cool bikes. And that’s normal to them.”

At times during his travels, Turner found himself surprised at the high number and regularity of all the protests, even needing to specify to people which event he was referring to when he would ask if they would be attending “the march.”

“We asked people if they were going to the march, and everybody was like ‘which one?’,” Turner said. “So there has to be a bunch to forget that there’s the Martin Luther King march,”

Despite being there for the March on Washington on Aug. 28, Rateb, Turner, and Olmos didn’t necessarily have an itinerary of what they would do in the days before that. As Rateb put it, there were times where the events simply made their way to them.

“There were days where we woke up and we didn’t have specific plans, but we would just walk down the street,” Rateb said. “We kind of just found little adventures every day, and sometimes the adventures found us.”

One of these adventures that the three talked about was stumbling across the Hoop Bus, which is, according to their Instagram page, ‘A bus unifying communities across the country through the love of basketball.’

“This bus pulled up on us. It’s called the Hoop Bus,”  Rateb said. “They travel around the whole country. It’s a bus, they put the names ‘Breonna Taylor’ [and] ‘George Floyd’ and they asked us if we wanted to ride, so we got on. And [from there] we got to lead a march that we didn’t even know was happening.”

The Hoop Bus took the trio all the way to the march, a ride that had Olmos feeling like a sort of celebrity.

“We had our head out the windows, and they drove all the way down D.C., like every block,” Olmos said.  “And people were just taking photos of us, and we were just waving out like we were celebrities or something.”

When the three arrived at the march, only then did they learn that it was organized for Historically Black Colleges and Universities, which resonated with Turner.

“That march was the HBCU march,” Turner said. “It was cool going to Howard [University]. I’m also the president of the National Pan-Hellenic Council here, which is all of the Black Greek letter organizations. Just going to Howard and seeing that’s where five of the organizations were founded.”

While at the HBCU march, Turner was surprised to find out that everybody at the event was there with the intention to protest as peacefully as possible.

“Every protest has an anti-protest. So I was thinking when I was out there, I was going to see something,” Turner said. “I saw nothing. Everything was so peaceful. There was no fights, no arguments, everybody just showed love.”

After five action-packed days on their D.C. trip, from visiting Howard University and MLK Boulevard, to meeting many different people from many different walks of life, the three student-athletes were made to pack their bags and return to Oregon.

Rateb, Turner, and Olmos were all shocked about how structured the march was in D.C. Rateb was even surprised about how the police were helping and assisting the march, and making sure everything ran smoothly.

“I can go to Portland and protest, but I need to keep looking over my shoulder, watch my back, keep an eye on local police,” Rateb said. “But out there, it’s not like that. The police were with us. When we were on the bus, the police were shutting down the blocks for us to let us go through. Everything is just comfortable out there, and everybody was so welcoming.”

Turner felt that his experiences in D.C. were more impactful than in Portland, as he felt surrounded by others who truly understood what the Black community is going through.

“We’re in Oregon, it’s not very diverse. You go to Washington D.C., and it’s one of the meccas for Black people. It’s the most progressive place for the Black community in the country right now,” Turner said. “Out here, a lot of the marches are led by [allies] or you mostly just see the allies around, which is great. But over there, you see more about what we’re fighting for, because everyone around you, is really, really, really, really, is experiencing it.”

Rateb, Turner, and Olmos all feel differently about how attending the March on Washington affected them, sharing three unique feelings personal to each of them.

For Olmos, he felt that attending the march was an eye-opener, and it has empowered him to do much more for his surrounding community.

“When I went out there to D.C., it just gave me an opportunity to listen and watch other people. I felt like I had a surge of energy go through me,” Olmos said. “It empowered me with more confidence to come back home and do more work here. Also, it opened my eyes to how much there is still left to do, but how much we are coming together in this new generation. As a student, I was grateful to have the opportunity to go out there.”

Turner felt that he was merely doing his part, saying that attending the march was something he simply had to do.

“When I was out there, because of the people that were up there speaking, I honestly didn’t feel like an activist,” Turner said. “I was just doing my part. I felt like this was something I needed to do. It was cool to be out there representing our school and our state.”

Rateb said that his experience was liberating, but it made him realize how different the West Coast is to the East Coast, especially in regard to what is available to certain college students.

“It was so liberating. It was so liberating being out there. You could just feel an overwhelming energy around you,” Rateb said. “As a student, it made me reflect [on] what Oregon State is like. We talked to some Howard students, and we told them we work for the Black Cultural Center, and they would ask, ‘what’s that?’. There [are] less than 50 BCCs around the country, but they had no idea what that was.”

Rateb also commented on how attending the march has empowered him to expand the NAACP chapter outside of Oregon State University, and across the Pacific Northwest.

And lastly, when asked if the three would ever go back to D.C., they all had one simple answer: yes.

‘I’m definitely going to take another trip because I have family out there,” Turner said.

Rateb was so impacted by the experience that he even proposed the idea of living out there in a few years.

“Me and the guys have talked about where we might be living in a few years, and after the D.C. trip, we were like “let’s come out here,” Rateb said.

But for now, the three will be in Corvallis, battling their opponents on the wrestling mat, and battling for change in their communities.

Correction: A pervious version of this article had published the wrong date for Martin Luther King’s ‘I Have a Dream’ speech.