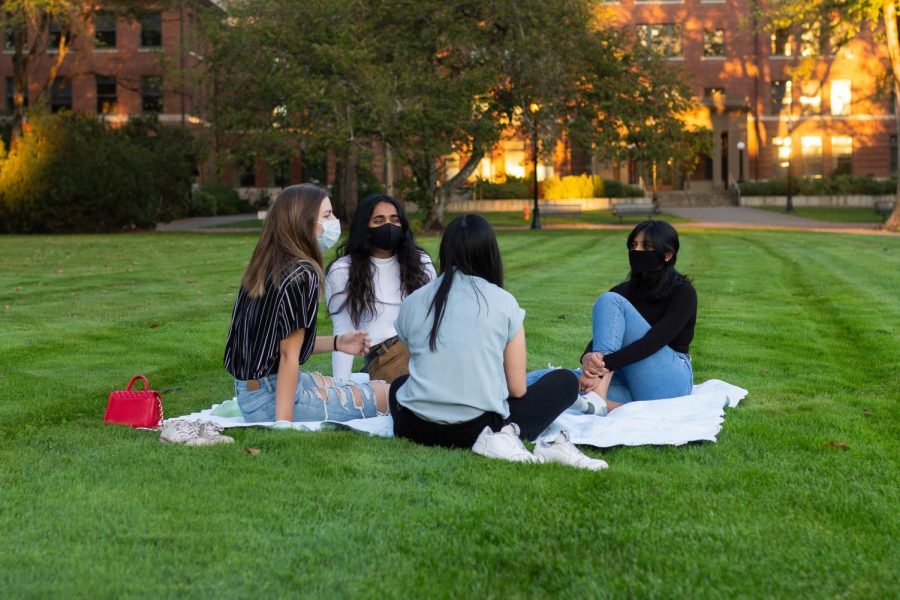 Correction: The Black Student Access and Success Initiative abbreviation, BASI, was spelt incorrectly on two instances. These corrections have been made.

On Sept. 23, OSU received a Higher Education Excellence in Diversity Award, a national award that honors colleges and universities for having a campus culture committed to diversity and inclusion.

“The HEED Award process consists of a comprehensive and rigorous application that includes questions relating to the recruitment and retention of students and employees — and best practices for both — continued leadership support for diversity, and other aspects of campus diversity and inclusion,” Vice President and Chief Diversity Officer, Dr. Charlene Alexander, said via email.

All of these initiatives aim to support Black and Indigenous students, as well as other marginalized communities by providing mentor support and helping them be successful in their academic endeavors.

Isabel Nuñez Pérez, president of Associated Students of Oregon State University, said ASOSU leadership has been making efforts to look objectively at ASOSU’s past problems and examine how their roles, power, and privilege factor into those problems.

In regards to their anti-racist efforts, Metzin Rodriguez, ASOSU vice president, said ASOSU held a Black Lives Matter campaign over the summer with the Oregon Student Association, and talked with Oregon representatives, legislators, and senators, including Senator Merkley. Additionally, Rodriguez said ASOSU discussed the Student Code of Conduct with administration and communicated information about classes on anti-racism at OSU and other resources.

“I guess within the university there’s a lot of system racism, right—it’s just like who’s in charge, and why are they in charge, and why do they get promoted? A good example of this is the extremely low number of tenured [Black, Indigenous, and People of Color] faculty. It’s hard to get faculty of color to come to OSU and stay at OSU,” Pérez said. “I mean even with Chief Rodriguez, he was here for a minute and then left, because it’s just a lack of support networks that exist within universities that support people to keep them here.”

The institution we exist in itself is inherently unequal, Pérez said, and that is why OSU needs additional departments like Diversity and Cultural Engagement, OID, and Student Experiences and Engagement—because people need support, and that support is not built in.

Now Pérez and Rodriguez are focused on changing the culture of ASOSU and working on its relationship with students and cultural centers specifically.

Terrance Harris, director of the Lonnie B. Harris Black Cultural Center, made major contributions to the BASI initiative, along with Dr. Charlene Alexander, the Office of Institutional Diversity, and other colleagues.

“A lot of that work came from going to the schools up in the Portland metropolitan area and really telling them about OSU and recruiting them to the institution. But also in that, we have to have things to sustain a student to be here, which includes other Black faculty and staff,” Harris explained.

Harris said the BASI initiative needed a lot of support from the Black Cultural Center, the EOP, the Distinguished Scholars Initiative, and other programs, and added they had been working on it for five years, since he started working at OSU.

“So, that award is great, but there’s still work to be done,” Harris said.

In regards to OSU’s show of public support for BLM, Harris said President Alexander has been very vocal about supporting Black OSU community members and that his actions are starting to reflect that as well.

As the Black Cultural Center director and a leader in the community, Harris said their goal has always been to be unapologetically Black and not allow other people’s opinions dictate how they live their lives.

“Higher education was not set up to be successful for anybody of color, specifically Black folks, but anybody else of color, so we are trying to break down those walls,” Harris said.

In regards to OSU’s recent anti-racist efforts, Harris said there have been many different listening sessions and conversations, but there is a point where you’ve got to stop talking and just take action.

“COVID has caused us to really rethink a lot of things. I’d say it’s been a terrible plague but it’s also been a revelation of sorts and it’s causing people to think and recalibrate. So I think speaking out about it is a good thing, because it wasn’t spoken upon—it would be glazed in this ‘POC’—People of Color. And when we’re discussing Black issues—and systemically our Black community has been just oppressed in so many ways—to actually speak it and say Black, is important,” Harris said. “Now, now that you’re saying it, let’s see what you’re going to do next.”

Harris said many Black faculty, staff and students would like to see progress in the hiring of Black faculty and staff and in the support offered to Black students.

“If there’s 93 [Black faculty members] out of 7,000, that’s a problem. But when you hire people, you have to be able to support them, to sustain them, to retain them, so they don’t leave, so you can build something great,” Harris said.

Harris also emphasized the importance of action in anti-racism initiatives.

“Nobody wants to hear about it, but we utilize our athletes, our Black athletes to play games and generate funding for the institution, but what are we giving back to the athletes? And not only them but to our Black community? What can you do to say that you really care? That you’re truly a diverse institution? It’s in your actions,” Harris said. “Just acknowledging the mistakes that have been made. You can’t take up for Oregon’s history, but you can take up for Oregon State’s history.”

In regards to what people need to know about anti-racism efforts, Harris said all Black lives matter.

“Justice for Breonna Taylor. Justice for Ahmaud Arbery. Justice for George Floyd. Justice for Jacob Blake. Justice for all of these people who have either been killed by the police or vigilantes or been injured by them. I think it’s important for people to say their names and for people to understand when we say all Black lives do matter, it is not saying that our lives are more important than somebody else’s,” Harris clarified.

“It’s the fact that we are being killed at an alarming rate and we have been for the past 401 years. And it’s time for people to wake up and understand that we do matter. And to remember that and think about how it makes you feel, if it was you. You can’t be Black,” Harris said. “But you can empathize, you can have the conversations in your own communities about racist issues and [when] talking about anti-Black issues.”