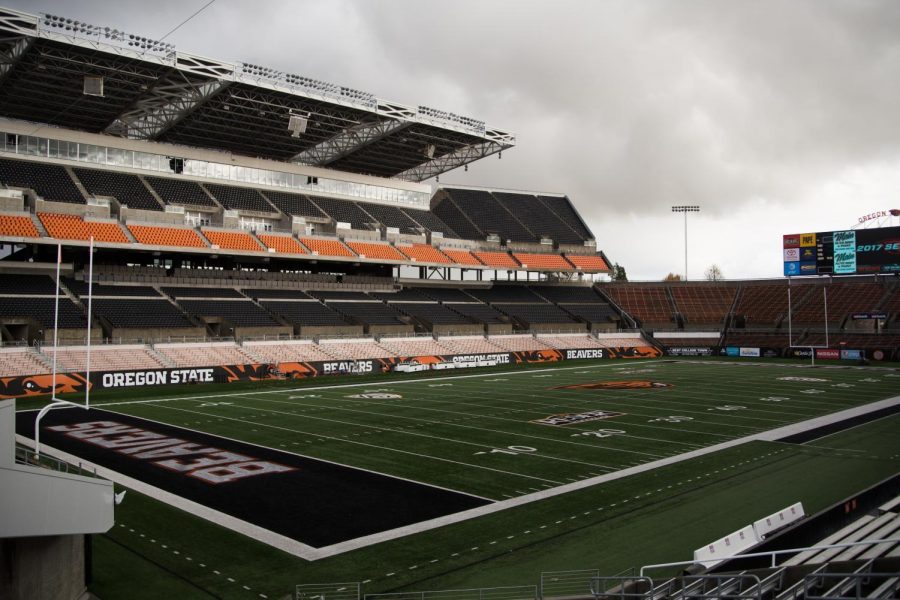 Reser Stadium is home to the Oregon State University football team. Reser Stadium has the capacity to seat 45,674 fans.

The PAC-12 university presidents and chancellors announced their plans to resume the college football season starting Nov. 6, 2020, along with a Nov. 25 resumption for women’s and men’s basketball.

The decision, voted on unanimously on Sept. 24 and announced at 4 pm, approved the return of PAC-12 conference football games without spectators and contact practice. But despite the unanimous vote, Oregon State University President F. King Alexander made sure to stress in an official statement that the decision was not an easy one.

“Be assured all decisions that I make regarding the university’s resumption plans, activities and athletics are based upon input and recommendations from a team of medical advisers and research scientists, and are in alignment with county health authorities, Gov. Kate Brown’s Office and the Oregon Health Authority,” Oregon State President F. King Alexander said in an official statement emailed out to OSU community members.

PAC-12 presidents choosing to resume sporting events stemmed in large part from extensive research and increased availability in rapid testing systems that can detect COVID-19 in as little as 15 minutes.

The conference also announced their intention to use those rapid tests frequently to monitor athletes, while the athletic departments across all PAC-12 universities will be doing everything they can to protect the student-athletes from contracting the COVID-19 virus.

“We get about two weeks leading into a four week training camp, so these next two weeks will be [spent] in the weight room and a few skill developments and walkthroughs which we will do a few times this week and then the following week,” Smith said. “Our bylaws say you get 29 days before your first game to do 25 practices, which is the same as last August. Really the only difference for us now is managing school being in.”

In commenting on Oregon State and the PAC-12’s quarantine protocol, Barnes described a plan that involves frequent communication with local health officials and a safety protocol which he feels is stricter than the Corvallis community.

“We are informed by our local health authorities and we look at it team by team, or if there is a spread within a team, we are all under [the] protocol, and mind you a different protocol, a more stringent protocol than the population of the community,” Barnes said. “So that is different, we will be, as we are on weekly calls with our county health group, they’ve been great partners in this. We’ll assess the issues as they arise, and there will be issues, there will be positives, we have [a] protocol to deal with them.”

While there are risks to resuming football competitions, there will be additional testing procedures incorporated for all student-athletes, even those choosing not to participate in the 2020 athletic season.

“OSU and other Pac-12 schools will continue to provide medical care for their student-athletes — including those who choose to not participate this season — for four years after a student-athlete completes their eligibility or turns 26,” President Alexander said.

Speaking on the possible occurrence of positive COVID tests in his official statement to OSU community members, Alexander expressed confidence in the research made by medical officials, and has faith extensive testing will ensure the safety of student-athletes.

“Medical experts also have additional data on the occurrence of myocarditis, an inflammation of the heart muscle, which has been discovered in a small number of student-athletes tested positive for COVID-19,” Alexander said. “Based on additional medical review, a student-athlete who has tested positive for COVID-19 now will undergo a required MRI that will be reviewed by a cardiologist after the student-athlete leaves isolation and tests negative for the virus. Even six weeks ago, medical advisers and researchers had said these measures would enable resumption of football competition in either late fall or early winter.”

The 15-minute rapid test was not available six weeks ago, and because of the lack of availability, the decision to cancel fall sports was made. Now, since the test is available for frequent use, the revote was unanimously approved. The availability of these tests will allow for testing for athletics, once there is more availability, these rapid tests will then be extended towards students, faculty and staff.

Going forward, determining ways to generate season revenue will be the next component for Barnes to figure out.

“Obviously, there are all sorts of revenue gaps because we aren’t going to have fans, we’re not going to have concessions, parking, and donations,” Barnes said.  “All that, I haven’t put a pencil to it, but you know right now I just got off my coaches call with all my head coaches and the first thing we did was shout “Go Beavs!” And celebrate a little bit, now, it’s time we actually do it and get the work done, and we will look at the finances once the schedules completed and really put a pencil to what it could look like.”

Since athletics have been postponed, the health and safety of athletes has been a priority, including injuries seen on the field across the NFL due in part to changes in offseason training. For Smith, he expressed the importance of finding a balance in training camp, one where the players can prepare for the regular season while working on their strength and conditioning.

“We’re trying to take advantage and talk to other colleges and programs, we have a lot of coaches who know other guys and were following that closely, seeing things they’ve thought they’ve done well and mistakes they’ve made,” Smith said. “We will be monitoring the amount of training we’re doing for the first two weeks and seeing where we’re at after these two weeks as we head into our training camp and designing our practices after that– because this is a fine line. This is a game where you want to get into shape and play physically so you need to do some of that during training camp to be prepared for weeks one and two but at the same time you’re obviously not trying to do too much.”

With the ongoing COVID-19 pandemic still effecting the world, there will be no spectators allowed at any games, including participation by university bands, cheer squads or tailgating on university property.

The PAC-12 Fall 2020 athletic season will begin with football, and be followed up by basketball, and according to Alexander’s statement, other fall sports will be following close behind– potentially beginning in Winter 2021.

“Other fall 2020 intercollegiate sports, including volleyball, cross country and soccer will be played in winter and spring 2021 as those NCAA championships have been moved to spring,” Alexander said.

Going forward, the university will make decisions with guidance from medical experts and scientific information. The health and safety of all members of the Oregon State community will remain the top priority. OSU will continue to trace new COVID cases through TraceOSU, and will use those numbers for more decisions to come.