BLM becomes one of the longest social justice movements in history, differs from others in the past 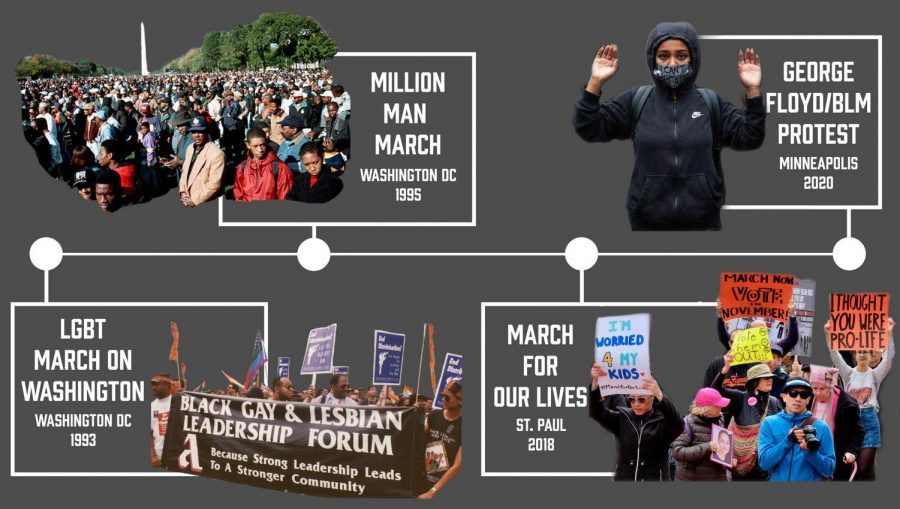 A photo-illustration of historical movements throughout the years and boxes detailing where they took place and when they started. Each photo has been modified from its original format. Photos courtesy of Creative Commons.

The Black Lives Matter movement, one of the longest social justice movements in history, passed the hundredth day that protestors filled the streets shouting, “no justice, no peace!” in protest of police brutality.

The Black Lives Matter organization coined the hashtag #BlackLivesMatter in 2013, when the acquittal of a neighborhood watch coordinator who shot a Black teenager on Feb. 26, 2012 became public news.

Trayvon Martin, age 17 at the time of his death, was walking to the convenience store from his relatives house in a gated community when he was approached by George Zimmerman, who shot Martin after a physical encounter began between the two.

Although protests began in response to Martin’s death, it wasn’t until the death of George Floyd on March 26, that the movement was supported by millions of Americans, taking to the streets for 121 consecutive days and counting.

“You’ve got the reliance on social media [now], so, as a result, a movement that starts locally can become national in a day,” said Larry Roper, a professor of Language, Culture, and Society at Oregon State University. “Whereas in the past, you have to rely on something more to the times. Conventional approaches. Which is either through the media or some type of really slow approach to communicate and galvanize and to find collaborators outside of the local area where you are.”

The consistency and community response of the BLM protests mirror the Montgomery Bus Boycott led by Rosa Parks’ refusal of the segregated transportation, starting in December of 1955 to December of the following year. Parks and other members of the National Association for Advancement of Colored People began a protest that lasted for a total of 381 days, and is considered one of the largest-scale boycotts in U.S. history.

“Sometimes the secret is that, I think, when something happens on the campus and people want to protest, just think about, ‘So what is the incident we are responding to?’ but [also] ‘What is the bigger issue that we need to address so that these types of incidents don’t continue to happen again?,’” Roper said.

Roper noted that this distinction is what sets a movement apart from a protest.

National protests are often started in response to a singular event in which protestors are asking for a remedy to a smaller issue, but a movement is what comes from the protestors asking for greater systemic change, which may have prevented the event in the first place.

The March For Our Lives movement is an example of the ways in which the event—a school shooting in Parkland, Fla.—highlighted greater systemic issues about gun control and reform. The organization is headed by alumni from the high school present on the day of the shooting, and have led sporadic protests since the forming of the organization in March of 2018.

“Because contemporary students were born into a new world… I think their sense of urgency may be different,” Roper said. “They have less patience than those who were protesting in the past.”