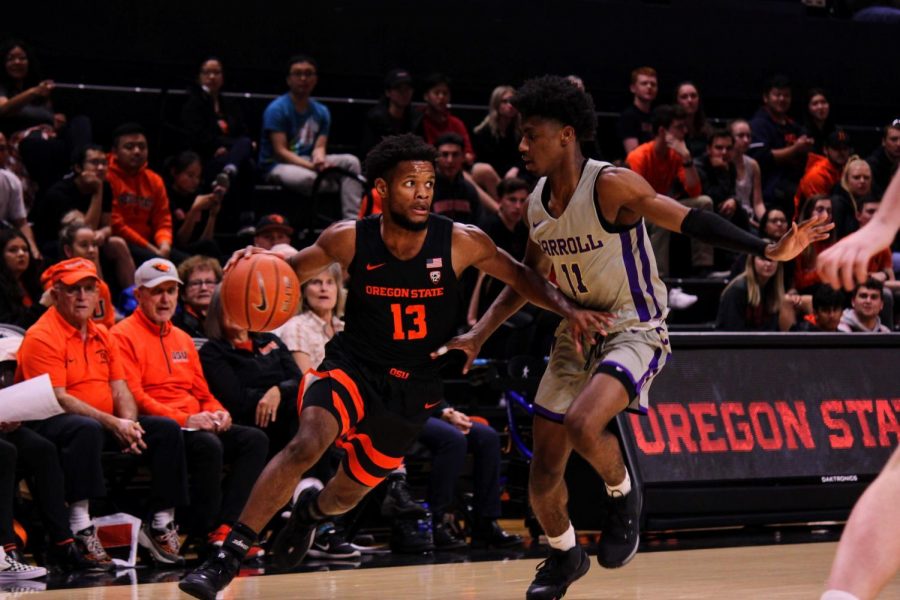 The Oregon State Beavers Men’s Basketball team is set to bring in four new players to the roster with their 2020 recruiting class, having half the class verbally committing and the other half already signing their letter of intent.

Unlike the 2019 class before it, the Beavers’ group of 2020 recruits has leaned heavily into bringing in frontcourt players, with only one current commit from the bunch being listed as a guard. But with the graduating players from Oregon State’s 2019 roster being two players from the frontcourt, the three incoming forwards might get the chance to play early and often.

Both senior forwards Tres Tinkle and Kylor Kelley have played their last game for the orange and black, taking the first step away from college basketball and leaving behind two massive roles to fill. Tinkle finished his college career as the Beavers’ all-time leading scorer, while Kelley finished his two-year run with Oregon State as the program’s all-time leader for blocks.

Those numbers will not be easy to replace, but each of the new players coming in for 2020 will get their shot. Especially the three forwards; Isaiah Johnson, Rodrigue Andela and Warith Alatishe. Each of them has different backgrounds and bring different skill sets to bring to the team.

Johnson comes into the class as the first to sign his letter of intent, officially committing to play for the Beavers in 2020 back in November of 2019. The 6-foot-6 forward will be coming to Corvallis rated as a three-star recruit by both Rivals and 247Sports after four years spent playing ball for two different high schools.

Johnson started his high school student-athlete career with Crean Lutheran High School where he was named the California Interscholastic Federation’s Player of The Year in his sophomore season, as well as a First Team All-League player in both his first two high school years. He would eventually transfer to Bishop Montgomery High School in California, where he once again earned an All-League selection in his junior year, and earned the title of Team Captain his senior year.

Standing at 6-foot-6-inches, Johnson has the versatility to play a couple of different positions, either as a taller guard or a shorter forward depending on where the team needs him. Meanwhile another Oregon State recruit, Rodrigue Andela, has the height at 6 feet 8 inches tall to play comfortably at forward for the Beavers.

Andela announced his commitment to Oregon State in March 2020 after spending his first two seasons at the junior college level. As a two-year member of the Kilgore College Rangers in Kilgore, Texas, Andela made a name for himself by lighting up the stat sheet enough to earn the honor of First-Team All-Region.

Andela’s scoring numbers are strong at 12.4 points per game in his sophomore season, same for his rebounding total at 9.0 a game. But with Kylor Kelley and his knack for shot-blocking gone, Andela’s 2.2 blocks per game might be the most important skill the junior forward will bring to the table in 2020.

Oregon State’s third and final forward at this point in the 2020 class will also be joining the Beavers after spending some time at the college ranks, the 6 feet 7 inches forward coming over after two years at Nicholls State, Warith Alatishe.

Alatishe started his college career slowly, mostly as a bench player for the Colonels, before finding his footing in a strong sophomore season where he found solid playing time in every game on the season, helping Nicholls State to a 21-10 record and a second-place finish in the Southland Conference regular-season standings.

Alatishe made his presence felt on offense in his second college year with 10.9 points and 8.3 rebounds a game, but more than that, the forward was a nightmare on defense, finishing his sophomore season averaging 1.7 steals and 1.3 blocks per game.

Rounding out the Beavers’ recruiting class for 2020 is the lone guard of the group, three-star commit Tariq Silver. Like Rodrigue Andela, Silver will be transferring from a community college where he showed enough strength in his game to attract the attention of more than a few schools.

Silver played just one year at Tallahassee Community College, but his 12.1 points and 4.2 rebounds per game were enough to earn interest from 27 schools, including Witchita State and Temple. In the end, Silver decided to take his talents to Corvallis, where he will have two seasons of eligibility with the Beavers after spending one year at junior college and one season in 2018 playing for the Eastern Michigan Eagles.

Back in 2019, the Oregon State Beavers brought in a recruiting class that saw early playing time from its true freshmen and transfer student-athletes alike, including key contributors such as Roman Silva, Gianni Hunt and Jarod Lucas. Whether or not 2020’s class holds the same bright fate remains to be seen, but with the key departures Oregon State suffered at the end of 2019, the new recruits will likely get a chance to make an early impact.