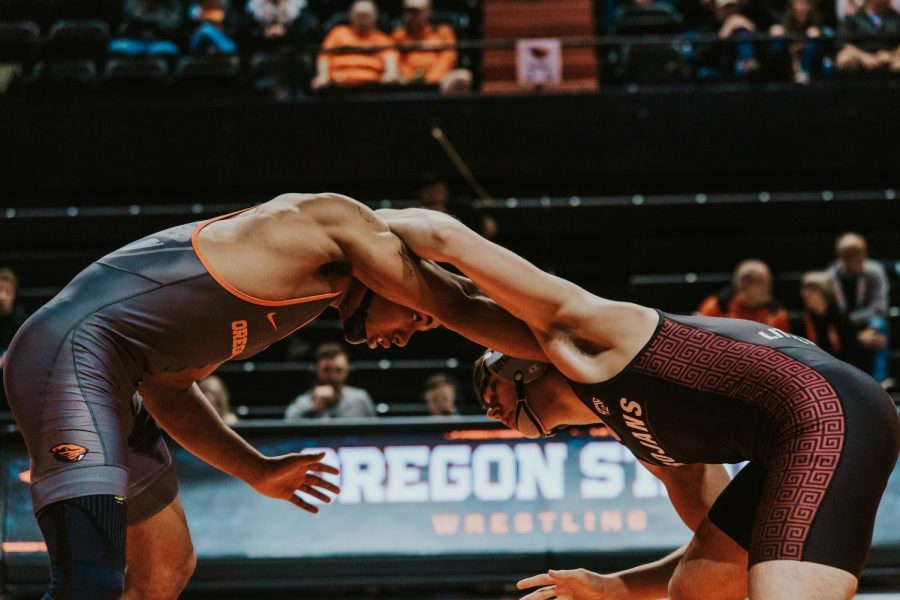 OSU Wrestler Mateo Olmos, in the 165 pound weight class, squared up versus Little Rock on Feb. 15, 2020 at Gill Coliseum.

Last season, the Oregon State Wrestling program finished with a dual record of 8-6, including wins over Michigan, University of Little-Rock, Arkansas, and California Polytechnic State.

At the PAC-12 Championships, the Beavers finished in fourth place and had one PAC-12 champion in redshirt junior Devan Turner at the 133 lb. weight class. All of these accomplishments came under former head coach Jim Zalesky.

Since last season, the wrestling program has undergone some changes. After former head wrestling coach Jim Zalesky was fired from Oregon State in March, Chris Pendelton, a former assistant coach at Arizona State, was selected to lead the Oregon State program. Isaiah Martinez, a two-time NCAA champion and a four-time Big Ten Champion, and Nate Engal, the USA Wrestling Greco Roman Coach of the Year (2019), were also hired as assistant wrestling coaches.

Since Pendelton, Martinez and Engal have arrived at Corvallis, five high school wrestlers have already committed to wrestle at Oregon State University once their high school career finishes, while another wrestler is transferring to Oregon State after spending his first two seasons at a community college.

One of those commits is junior Ricky Bell, who wrestled West Linn High School in West Linn, Ore. Bell won the 2020 6A 133 lb. State Championship and finished with a record of 32 wins and just one loss. Bell defeated his opponent Cameron O’Connor of Tigard High School by a score of 7-1. Bell is projected to wrestle in the 125 lb. weight class for the Beavers.

The second commit is senior Gabe Vidlak, who wrestled at Cascade Christian High School in Medford, Ore. Vidlak is a three-time 3A 126 lb. State Champion and capped off his senior year at a perfect 45 wins and no losses. Vidlak defeated his opponent, Tony Cisneros of Dayton High School, by a score of 10-2. Vidlak is projected to wrestle at the 133 lb. weight class.

Another commit is junior Charley Hastriter, coming from Capital High School in Boise, Idaho. Hastriter, who also played weak-side defensive end in football, is a two-time state placer, winning the 220 lb. State Championship in 2019 and placing third at 182 lb. the year before.  Hastriter is expected to wrestle at the 285 lb. weight class for the Beavers.

Sophomore Isaiah Anderson has also committed to wrestling for the Beavers. Andreson,a two-time 195 lb. State Champion and Fargo and NHSCA Greco-Roman finalist out of Pasco, Wash. still has two more years of high school left before he makes the move to Corvallis. He is projected to wrestle at either the 197 or 285 lb. weight class.

Junior Kodiak Stephens has also committed to wrestle for Oregon State once he graduates from Bret Harte High School. As a junior, Stephens placed fourth in the 182 lb. class in all of California, and is already an accomplished Greco-Roman wrestler. Stephens projects to wrestle at either the 184 lbs or 197 lb. weight class.

Not only did Shaner lose just one match out of 29 total last season, but the Clackamas transfer managed to compile a resume that includes NJCAA National Champion of the 133 lbs weight class, as well as two appearances to the NJCAA All-American team, as an Honorable Mention member as a freshman and First-Team as a sophomore. Shaner is expected to compete for the Beavers at either the 133 lbs or 141 lb. weight class.

Although these are just a few of the Oregon State wrestling commits, the new coaching staff, which includes decorated wrestlers, has the opportunity to continue recruiting and building talented classes.

Editor’s Note: A previous version of this article was inaccurate in representing the career accomplishments of Jason Shaner. The error has been removed, and on behalf of the Barometer Sports Team, we would like to apologize to Jason for the oversight.