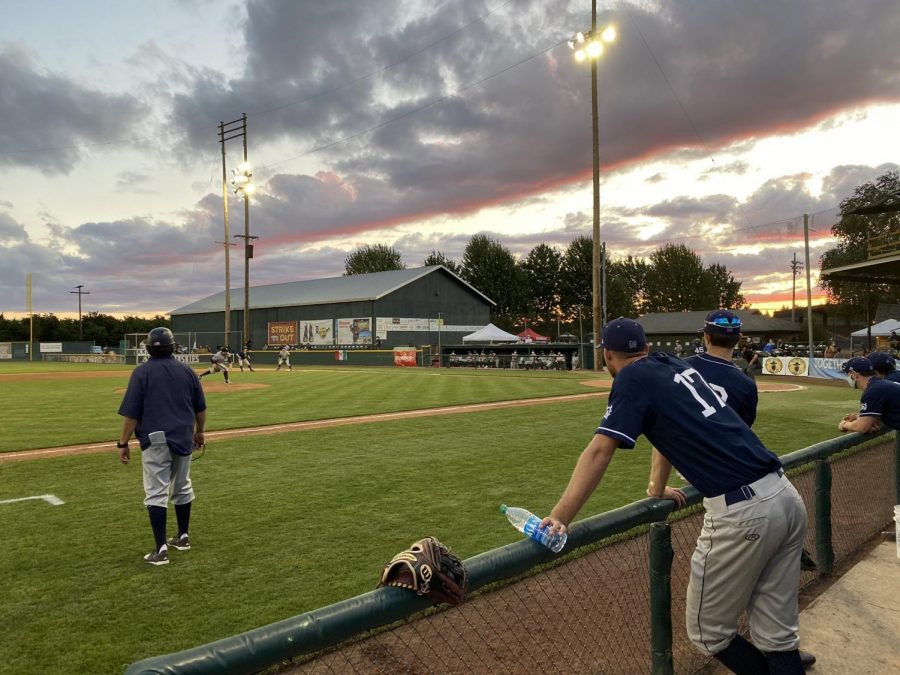 Members of the Portland Pickles watch on during a July 12, 2020 game against the Gresham GreyWolves. The Pickles would go on to win 6-1.

The sun is out and the grass is green, which means that summertime is in full swing. And in any other year, that would mean the baseball season would be in full swing right now as well.

However, the COVID-19 pandemic has placed nearly all baseball on hold. The college baseball season had not lasted a full month when the NCAA pulled the plug on March 14, canceling along with it the College World Series for the first time in the event’s history.

Major League Baseball also postponed its season for nearly four months and will begin an abbreviated 60-game season starting on July 23, rather than the typical 162-game season. However, the majority of these games will be played in empty stadiums, with fans stuck at home watching from their TVs and streaming devices. All affiliated Minor Leagues, including the Northwest League, have been canceled.

So it may come as a surprise that there is live baseball being played in Oregon with fans in attendance right now, with many current members of Oregon State’s program involved in play as well.

The Pickles normally play in the West Coast League, a summer league for college athletes. However, like many other leagues, the WCL canceled its 2020 season in response to the pandemic. Thus, the decision was made by Pickles management to create their own league so there would be baseball this summer.

“Really, it was just a matter of how do we try to play baseball in a safe environment,” said Pickles owner Alan Miller. “We wanted to figure out a way to create an environment where people felt safe and just try something new. We’re really excited to get this going. We got about four weeks of baseball and it’s been amazing so far.”

In addition to the Pickles, the three other teams participating in the league are the Portland Gherkins, the Gresham Greywolves and the West Linn Knights, a team loosely based on the Corvallis Knights of the West Coast League.

All WWWL games are currently being played at North Marion High School near Aurora, as the Pickles home stadium at Portland’s Lents Park is in Multnomah County, which is still in Phase One of reopening.

To ensure the safety of fans and players alike, strict health and social distancing guidelines have been enforced at all WWWL games. Only 200 fans per game are allowed to attend, and all fans are required to take a temperature check before entering the ballpark and must wear masks while inside. Hand sanitizing stations have also been placed throughout the ballpark and certain seats are marked off to encourage social distancing.

“There’s still definitely challenges to it. They’re all giving us hand sanitizer and there’s a big bucket of it in the dugout,” said Oregon State infielder Andy Armstrong, who is playing for the Knights. “They’re doing all they can to prevent COVID-19 from spreading so we can all play some baseball, but you know it’s hard. We’ll see what happens.”

Unfortunately, despite the league’s best efforts, two unspecified players who lived together tested positive for COVID-19. While both players were fine, the positive tests resulted in the league placing a week-long hiatus on all games. The league is set to resume on July 23.

COVID-19 challenges aside, most of the players involved with the league are still just happy to be playing baseball again.

Players have to pay to compete in collegiate summer leagues, but view them as a great opportunity to hone their skills and stand out before Major League scouts. Past WCL players that have gone on to play in the Majors include Rhys Hoskins, Chris Davis, Jacoby Ellsbury, James Paxton and Mitch Haniger.

Still, some players enjoy playing in the league just for the fun of it.

“It’s valuable to go out there and get repped, but along with that, I just love going out there and playing,” Armstrong said. “I’m not going to get to play this game forever, so for me, it’s a time to get better but also to just play some baseball and have fun in a different environment. It’s a great opportunity to meet people and make different connections. I look at it in that way as well.”

One of Armstrong’s teammates is happy to be back as well.

“I’ve been playing baseball every summer for as long I can remember,” said Knights and Beavers RHP Jack Washburn. “That’s what I grew up doing and to have such a blank summer, it just feels empty. To be back out on the diamond with the guys and playing baseball just feels right.”

With the Wild Wild West League resuming once again, fans looking to attend games may purchase single-game tickets from the team website. Games will also be streamed live for free on the Portland Pickles Facebook page and YouTube account.