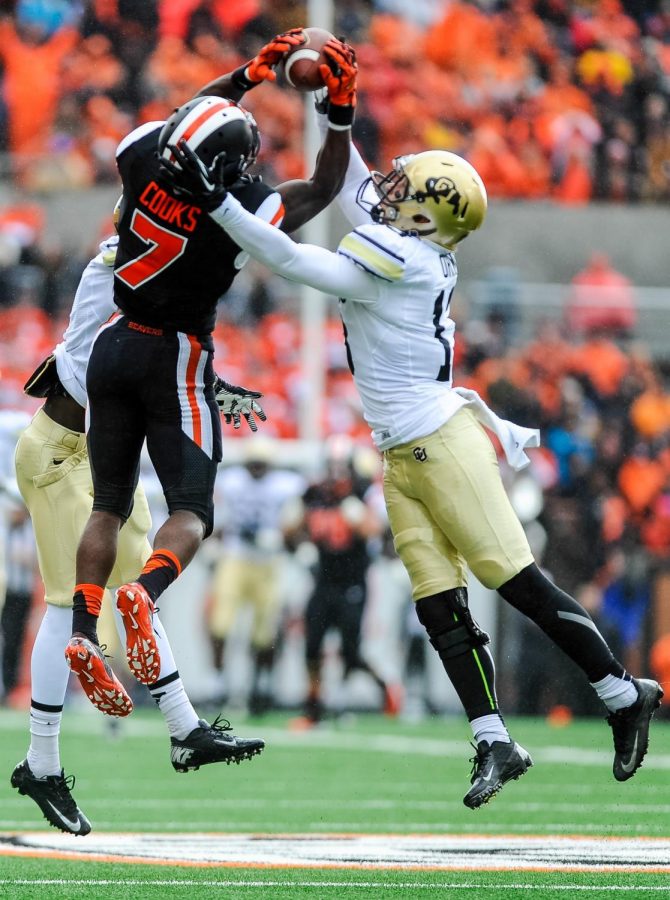 Junior wide receiver Brandin Cooks leaps up for a 42-yard catch at the start of the 2013 season. Cooks finished the game with nine catches for 168 yards and two touchdowns, and added 47 rushing yards.

Brandin Cooks, the Oregon State alumni with two NFL Conference Championship rings and four 1,000-yard seasons to his name seven years into his professional career, was filling the box scores long before his NFL career began.

Before two trips to the Super Bowl with the Los Angeles Rams and New England Patriots, before three seasons with the New Orleans Saints and two as the team’s leading receiver, even before he was selected 20th overall in the 2014 NFL Draft, Brandin Cooks was proving his talent at the college level for the Oregon State Beavers.

Cooks was far from an unknown prospect when he enrolled at Oregon State in 2011. The future NFL receiver was rated as a four-star recruit by Rivals and earned scholarship offers from in-state schools such as USC and UCLA, turning both down after originally committing verbally to UCLA for the chance to play as a freshman with the Beavers.

While Cooks turned in a quiet freshman campaign with 31 catches for nearly 400 yards, the Beaver would turn into a go-to star by the time his sophomore season took off, finishing fourth in the PAC-12 conference in receiving yards with 1,151.

With Oregon State’s leading receiver from 2012 of Markus Wheaton gone from the team by Cooks’ junior season in 2013, the third-year receiver would be given more targets and more of a chance to shine.

With junior quarterback Sean Mannion throwing 603 passes, the Beavers put together the third-most pass-heavy offense in the NCAA, giving Cooks a great number of targets leading to even greater production in the offense.

With 128 receptions in 2013, Cooks was the clear-cut number one receiver in the Oregon State offense, with the second-highest catch total on the team coming from sophomore receiver Richard Mullaney with 52. With the trust from Mannion and the Beavers offense to give their top pass-catcher the ball early and often, Cooks flourished to the tune of 1,730 receiving yards and 16 touchdowns.

Cooks’ strong season helped get the Beavers to a 6-6 record and an appearance in the Hawaii Bowl, but beyond team performance, Cooks helped put himself in the national spotlight. His 128 catches ranked second in the FBS among receivers, same for his 16 touchdowns, while those 1,730 receiving yards were enough for the highest total of any player in 2013.

Up against the stiff competition of two future NFL wide receivers Mike Evans of Texas A&M and Sammy Watkins from Clemson for the Biletnikoff Award by the end of the 2013 season, Cooks was able to bring home the award, making him the second Oregon State receiver to earn the trophy after Mike Hass in 2005.

With a strong, award-winning junior season in his rearview mirror, Cooks decided to declare for the NFL Draft early, being selected by the Saints in the first round, where the next few seasons of his career would resemble his college production.

Cooks would make appearances in 10 games during his rookie year for the Saints, starting in seven and closing a promising rookie campaign with 53 catches for 550 yards and three touchdowns. The next year, however, he took a massive step forward, looking close to the player he’s turned into today.

In year two with the saints, Cooks avoided a ‘sophomore slump’ by doubling his receiving yard total from 550 to 1,138, while his volume increased to 84 catches in 12 starts. Next season would hold similar success for Cooks and the Saints, but the third-year receiver was traded to the Patriots for the 2017 season.

The move had little effect on Cooks as a player, however. The Oregon State alumnus still managed over 1,000 receiving yards, still found the endzone seven times, and for the first time in his career, Cooks made the Super Bowl, but was forced to exit early due to injury.

As consistent as ever, when Cooks was again traded in 2018 to the Rams, he managed to put together yet another strong season, breaking the 1,200-yard mark for the first time in his career and making another appearance in the Super Bowl.

While 2019 was a down year for Cooks’ NFL standards, he will get yet another fresh start with a new team. This time, he moved on to Houston to play for the Texans, where he’ll hope to bounce back from an injury-heavy season last year with the Rams.

Cooks has been an asset for every team he’s played for in his NFL career, and he’s not done being a consistent threat for 1,000 yards. From New Orleans to New England to Los Angeles, and now to Houston, Cooks has been a strong pro with a strong NFL resume.

But before becoming an NFL star, he made his name through three years and a Biletnikoff Award in Corvallis as a receiver for the Oregon State Beavers.