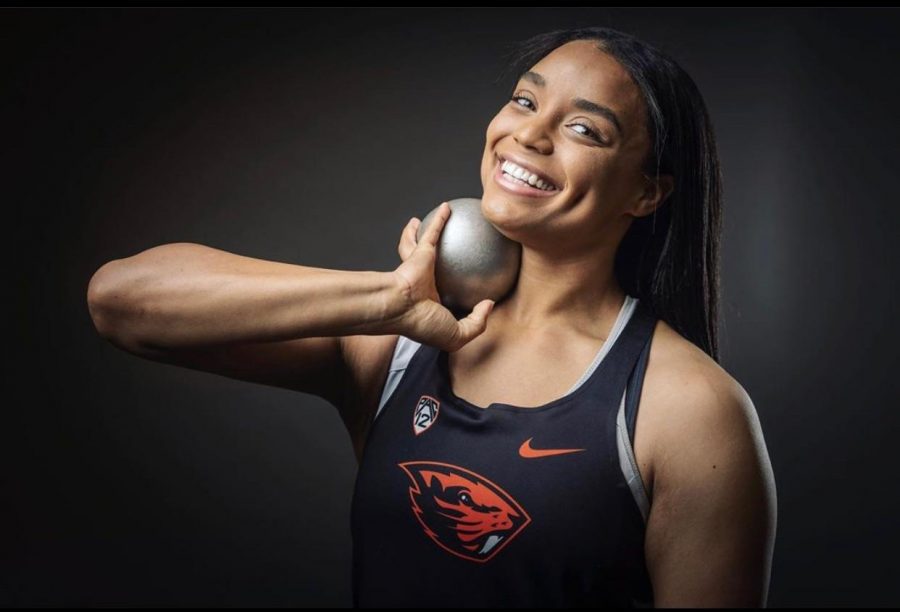 OSU Track and Field's Sydney Guthrie-Baker posing with a shot.

Sydney Guthrie-Baker is a senior student-athlete at Oregon State, her name gracing the all-time lists in both shot put and hammer throw for the Beavers’ women’s track and field team.

But Guthrie-Baker isn’t only a student-athlete. She is also a vocal advocate for the Black Lives Matter movement.

“I think what’s most important is that Black Lives Matter is a movement and not a moment,” Guthrie-Baker said. “Historically, this has been going on for decades, it’s nothing new. It’s not something that just emerged in 2020… the ideology and methodology behind it have been going on for many decades.”

Protests from the Black Lives Matter movement have taken place across the country since the killing of George Floyd by the Minneapolis Police Department on May 25th. The unified movement throughout all 50 states against police brutality and racial inequality through peaceful protest has taken place on a wider scale than Guthrie-Baker’s generation has seen.

Countries around the globe have expressed support for the Black Lives Matter movement as well, holding their own protests while encouraging protesters to continue fighting for what they believe is right. Guthrie-Baker contributes this global awareness of America’s protests to social media, as well as the impacts on our daily lives from the COVID-19 pandemic.

“There are so many more people that are now discovering this [BLM] and opening up their eyes to something that is completely brand new,” Guthrie-Baker said. “I think with this pandemic it has just made it easier for people to stay on their phones and kind of swipe and go through all of this, so many events happening… I guess being taken away from your normal routine has allowed for new discoveries to come in and that has been such a catalyst for this.”

Despite being unable to attend protests herself, Guthrie-Baker is using her voice to advocate for change. Through social media and involvement with other student-athletes, she is pushing for a brighter future.

“There’s a group of us working on something called DAMchange. We’re in the process of putting things together with ideation right now,” Guthrie-Baker said. “For me, one of the biggest things that I want to work on is having diversity and inclusion seminars for head coaches, assistant coaches, for all of us to have them in a room and sit down and explain what it’s like being a student-athlete right now, in this time specifically.”

Being a student-athlete, Guthrie-Baker feels added pressure and responsibility to speak out and advocate for Black Lives Matter in order to spark the change that she believes is overdue. The student-athlete has seen the fight for being brought to the forefront of the nation’s attention and believes that it will likely continue until steps in the right direction are taken.

“Absolutely, I feel a sense of responsibility to use my small platform as a student-athlete to raise awareness around Black Lives Matter, to raise awareness around equality and equity and advocating for what a brighter future should look like,” Guthrie-Baker said. “I’m not going to shy away from sharing that just because I’m a student-athlete. There is so much more happening around the world that is bigger than sports and it’s time we recognize that.”

Guthrie-Baker believes that the first step starts with realizing there is a problem and helping to educate people about systematic hardships Black people face. She encourages everyone to be understanding of other’s perspectives and having those difficult discussions with your loved ones.

“Part of it is having rough conversations with our own families and understanding each other’s perspectives. Ultimately I think the goal behind it is that we want to enter a new time where we can actually say it is peaceful,” Guthrie-Baker said. “Where we can say people do have a sense of equality and we feel safe bringing our children to school every day. That’s ultimately what we’re fighting for, and I think this movement is just one of the various parts of our fight and our journey into this.”

Amidst all the chaos in the world,  from the issues of systemic racism being brought to the nation’s attention, to the ongoing COVID-19 pandemic, Guthrie-Baker urges everyone to stay positive and let your loved ones know you love them.