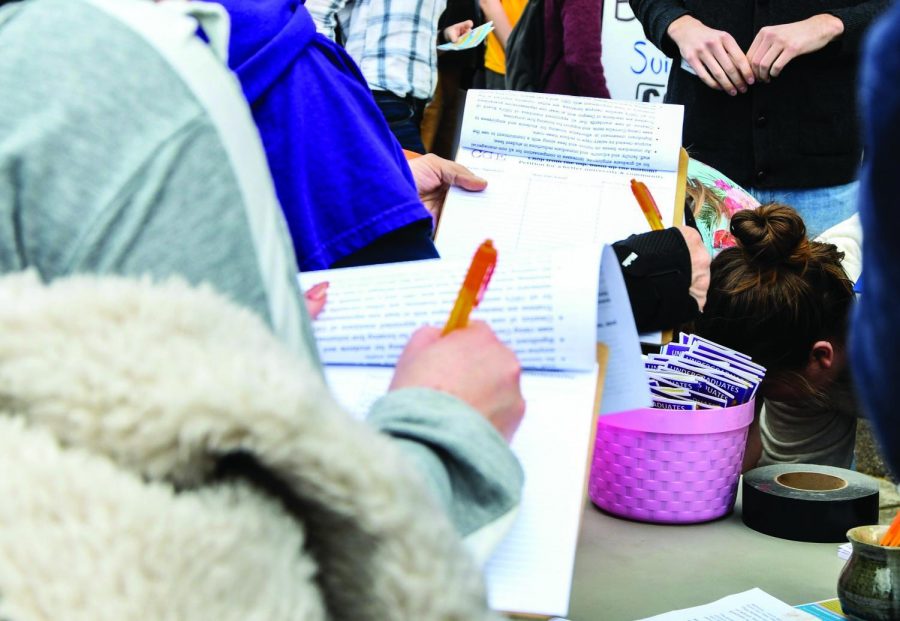 A crowd stands outside the Kerr Administration Building in the afternoon of March 5 to sign a Coalition of Graduate Employees petition.

As Oregon State University adjusts to the impacts of COVID-19, the OSU Coalition of Graduate Employees continues to push for signatures on their petition, “Chop from the top, build up the bottom.”

CGE first began the petition in fall 2019, according to Andrea Haverkamp, president of CGE and graduate research assistant in environmental engineering with a Ph.D. minor in queer studies. Haverkamp said the demands of CGE’s petition are more relevant than ever, considering the recent budget cuts at the university due to COVID-19.

“OSU’s budget crisis has always been a crisis. Employees and students have known it’s always been a crisis, and it took a literal pandemic for them to realize their budget was a crisis. And how did they respond? They cracked down on the most vulnerable workers and the most vulnerable people in our community,” Haverkamp said. “They have the money to support the pharmacy, but used circular logic saying that it has to fund itself like a private business, so they’re going to outsource it.”

The petition includes a number of demands: a cap on salaries at $186,000 and cuts to salaries in access of the amount; a freeze on tuition and fees; investment in affordable housing; a redistribution of funds for a universal meal program; summer funding for all graduate employees; increases in compensation for all non-managerial staff, faculty and adjuncts; immediate reductions in student fees; and, a reworking of the OSU Board of Trustees.

“The different planks of the petition rely on each other. One critical change that needs to happen is a change in the make-up of the Board of Trustees,” Samuel Burns, an OSU graduate teaching assistant and master’s student in applied anthropology, said via email. “This board is essentially hand-picked by university leadership and is made almost completely of executives from the extractive and health profiteering industries, whose interests are at clear odds with the mission of a land-grant institution.”

Burns said COVID-19 has exposed the “brutality and inhumanity that comes from centering profit generation over the well-being of the community.”

“This administration cannot afford to pay their outrageous salaries without the income from the dorms, so they are forcing first-year undergraduates to live in dorms unless they qualify for a few very tiny exceptions,” Burns said via email. “This decision was made for purely financial reasons and goes against public health advice. This is what happens when a land-grant institution loses its way.”

Burns said the pandemic has made the demands of the petition a “life-and-death issue,” and that the university’s leadership is putting the community at risk for its own financial gain.

Katie Hutchinson, a creative nonfiction candidate in OSU’s Master of Fine Arts in Creative Writing, graduate instructor and CGE’s VP for Social Justice, said while the current cultural moment is characterized by uncertainty, there is opportunity for growth and change from the status quo.

“One way the university can supply some semblance of stability as we move forward with the 2020-21 school year in the midst of a pandemic is by providing a better foundation for its employees and students—more money in the forms of funding and payment for work, more affordable housing, a freeze on tuition and student fees, just to name a few,” Hutchinson said via email.

Hutchinson said the goals of the petition are all necessary for the livelihoods of OSU’s students and workers.

“I don’t know that I see any of these as more important than the other; all are necessary for a well-balanced way of life, especially for a student, who needs to use their energies to study, not worry or stress about security and survival,” Hutchinson said via email. “People of color (I am a POC myself) and international students are particularly vulnerable right now on Oregon State’s campus, as they have additional safety and security issues not faced by white students or domestic students.”

Haverkamp said one of the key changes she would like to see is a cap on salaries, and that even with temporary reductions to some salaries due to COVID-19, the highest-paid university employees will still make over $300,000 a year (she referred to a 20% reduction on an administrator making $400,000 a year).

“Meanwhile, our average worker takes home about $15,000 a year. People deciding our lives, some of them making 45 times what we make,” Haverkamp said. “It doesn’t make sense for someone to, in a week, make about what we make in a whole year. We are mothers, we are parents, we are trying to survive. So it just is very gross. That’s just a gross distribution.”

“Ed Ray cannot say he has not heard it, and had the opportunity to sign it, and it’s more relevant now than ever,” Haverkamp said. “In fact, this shows that the university doesn’t do its job. We knew that this needed to happen before the crisis even hit.”

Tali Ilkovitch, a contract action team member for CGE and an undergraduate student studying natural resources, said both the petition and supporting “the people who are most vulnerable” in the OSU community are increasingly important, particularly considering COVID-19.

“The petition is to start a conversation about the wealth inequality that happens at our institution, and the way that it affects the workers and the people who labor for this institution and create the value and wealth for this institution. Graduate workers, and undergraduate workers alike, are tasked with providing the labor through teaching and learning and researching, and also things like creating food, creating safe housing like RAs,” Ilkovitch said. “We fulfill so many positions, and we are the lifeblood of this university. We make this university run, and we deserve to get a fair slice of that pie, and see that wealth that we create.”

Burns said that, as a baseline, no one who works at the university should live in poverty.

“If the institution has the money to make millionaires out of the bosses, it has the money to pay living wages. Currently, the average graduate employee makes below Oregon’s poverty line, but has to commit a minimum of 48 hours a week to the university,” Burns said via email. “Graduate employees generate tens of millions of dollars in tuition (we teach a substantial portion of the classes and labs). We bring in grants and conduct essential research. We mentor and advise undergraduates. We conduct fieldwork and lab work and raise the profile of OSU. Yet, we live in poverty, while the president and his cronies become millionaires.”

Burns said an ideal OSU is one in which undergraduate and graduate students can earn a degree without incurring life-long debt and without food, housing and health care insecurity, in addition to one in which essential workers—janitors, bus drivers, electricians, food service and so on—can live with dignity and security.

Haverkamp said her ideal vision for OSU is a university where everyone at a minimum makes the equivalent of 15 dollars an hour, 40 hours a week—totaling to $33,000 a year.

“An OSU in the future looks like not spending five million dollars a year on this new police force, but instead putting every single dollar above the minimum required by the nuclear regulatory commission towards the underfunded CAPS. Putting it towards a hardship fund similar to one that exists at the University of Utah. Putting that five million dollars into emergency housing,” Haverkamp said.

Looking forward, Ilkovitch said she would like to see a mass commitment to distributing wealth at OSU.