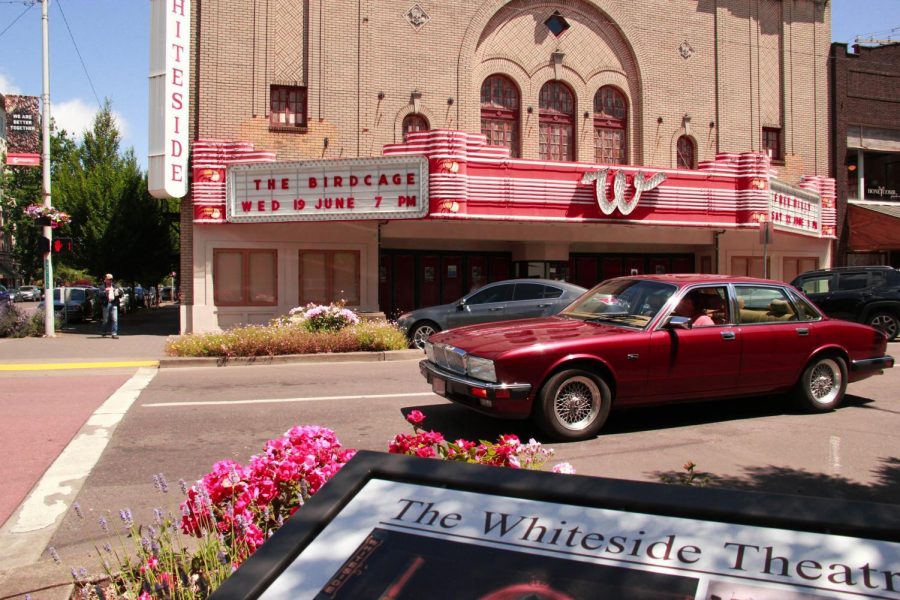 Since the temporary closure of non-essential businesses earlier this year, Corvallis’ locally-based theaters—including Darkside Cinema, the Whiteside Theatre and the Majestic Theatre—have had to adjust programming and make plans for reopening amid COVID-19.

Darkside Cinema, Corvallis’ only independent locally-owned theater, is temporarily closed due to COVID-19. Joey Bauer, manager of Darkside Cinema, said the theater has adjusted by offering virtual cinema and planning for an eventual reopening.

“We are now masters of hand washing. We have been offering a wide variety of virtual cinema titles, selling goodies and t-shirts in the downstairs lobby Friday through Sunday, and chipping away at various tasks necessary for reopening,” Bauer said via email. “We are staying as sane as humanly possible.”

Bauer said the Darkside does not have a specific timeline in place for reopening, but is working to implement health and safety protocols in the theater.

“The Darkside will comply with OSHA regulations in regards to COVID-19. We will have new seating arrangements as well as specific protocol for patrons when entering and exiting the building,” Bauer said via email. “Masks will be important, and everything will be clean, clean, clean. Auditoriums will be cleaned between each show and specific instructional announcements will be made before each show starts.”

While having a “blank screen” has been difficult, Bauer said one of the most uplifting aspects of the outbreak is the continued support from the community.

“Send us cards with cute puppy dogs on the cover. We are also accepting donations through our webpage, as well as offering virtual cinema titles,” Bauer said via email. “They can also support by stopping by on the weekend to purchase some damn good popcorn. We have received much support already, and we are very grateful.”

Darkside Cinema updates and information about virtual cinema offerings can be found at the Darkside’s website.

The Whiteside Theatre is home to a variety of movies and live events, and recently reopened for second-run movie showings. Jen Waters, executive director of the Whiteside Theatre, said staff have taken time to update the theater and its systems during its temporary closure.

Waters said the theater has a number of reopening protocols, including providing staff and volunteers with personal protective equipment, allowing for only one group of patrons in the lobby at a time, wiping down surfaces, having patrons pre-purchase tickets and seating, and cleaning the restroom every hour. Concessions will be open, but the theater will withhold from alcohol sales for the time being, according to Waters.

“Our theater is 7,000 square feet. We have 750 seats, so we’re allowing 100 people in the theater,” Waters said. “We’re lucky enough that the ticketing system that we use actually has a tool that automatically distances people.”

Looking forward, the Whiteside plans to video record musical performances and post them to the theater’s Youtube page, and has a number of shows booked with local bands in October and November. Waters said the theater will make the decision as to whether or not to proceed with the shows as the date approaches.

“As we get closer to that, we might even say hey, we’re probably not going to be able to do this, just based on cost,” Waters said. “We have to be careful about how we’re spending our money now. We don’t want to lose money.”

Waters said the biggest challenge for the Whiteside is staffing, since workers have been furloughed and are now working as volunteers.

“We applied for the paycheck protection program loan, but I have to spend 60% of it on staff salary. It’s like all of a sudden my house manager, my AV guy, my tech director, I have to find other things for them to do,” Waters said. “I will be able to find other stuff for them to do, it’s just been difficult instead of just being like, ‘you’re doing this event.’”

Waters is encouraging donations to the Whiteside, and is also encouraging community members to contact state and national representatives to ensure local theaters receive support.

“The entertainment industry is not coming back anytime soon, and we’re going to need more support. Many of us probably aren’t going to work in earnest until the new year, certainly not in any real way until a vaccine is around,” Waters said. “I feel like they’re starting to understand that, but it’s always good to—if you have the time and don’t have the money to donate—write a letter and say, ‘hey, I’m concerned about my local theater.’”

The Whiteside will open again on Wednesday, July 15 for a second-run movie showing of Jaws. More information can be found at the Whiteside Theatre website.

The Majestic Theatre, a branch of the City of Corvallis Parks and Recreation Department, has had to cancel, suspend or postpone all events—including the rest of its productions and performances for the 2019-20 season—as a result of COVID-19.

“Something as a normal theatrical process that we would just do now has to be incredibly orchestrated, because the risk is real high,” said Jimbo Ivy, theatre supervisor for the City of Corvallis Parks and Recreation Department. “But the kind of bottom line for us, for the directors we’re working with and myself and my superiors at the Parks and Recreation Department, is nothing that we’re going to attempt is worth even one person getting sick. The safety of our community will always be paramount for us.”

“We started doing those once a week in April, then we stepped up our intensity in May, doing three a week. So we had a Friday event, a Saturday event and a Sunday event,” Ivy said. “Since then, we’ve done about 25 performances, and I think generally it’s between 200-300 folks who come to see them every weekend. So it’s been pretty cool to  be able to connect with our community in that way.”

Ivy said the online performances help to “feed the need” of the local creative community.

“This is their primary hobby, and for most of them, their life pursuit,” Ivy said. “So to not be able to do that for months on end was pretty bleak for them.”

The Majestic has developed a three-stage reopening plan for the coming months: first, pivoting to online activities and programs; second, conducting live performances with a remote audience; and third, limited live performances.

“Once we do feel it’s safe, and we can guarantee the safety of our performers and our audience, we’ll be figuring out a way to have those limited live performances as kind of the last step before the vaccine,” Ivy said.

Ivy said one of the silver linings of adjusting to COVID-19 is that participating in shows is now more accessible, particularly because the physical barriers and time commitments typically associated with theater are removed.

“If you have a computer or a smartphone, you can participate—you don’t have to be able to come to rehearsals every night of the week for months,” Ivy said. “You don’t have to be physically able to get up on stage and jump around. So we’ve had folks experiencing disability, or folks who work night jobs and never can actually be a part of the normal rehearsal process. But also we’ve had folks from outside the community, from other theater groups, from different countries even who have been able to participate in these plays and comedy events.”

Ivy encourages Corvallis community members to attend and participate in the Majestic’s virtual productions, even if they’ve never acted in a show.

“It’s never been easier and lower risk, and lower commitment. You send in a video audition on Monday, there’s a couple of rehearsals in the week, and then you do the performance on Saturday and you’re done. It’s a great way to try out and just get connected with our community, because the people that have been coming over from different theater groups, or different cities because of the easier way to get connected—they’ve been messaging me like, ‘wow, ya’ll have a really great community. I hope once things are back to normal, I’m going to continue coming,’” Ivy said. “That is what I would say—it’s never been easier to get connected to the Majestic, even though there’s a global disaster going on.”

“Tune in to our Facebook, 7:30 on most weekend nights, and you can catch local folks doing what they love from the comfort of your own home,” Ivy said. “It’s pretty cool.”