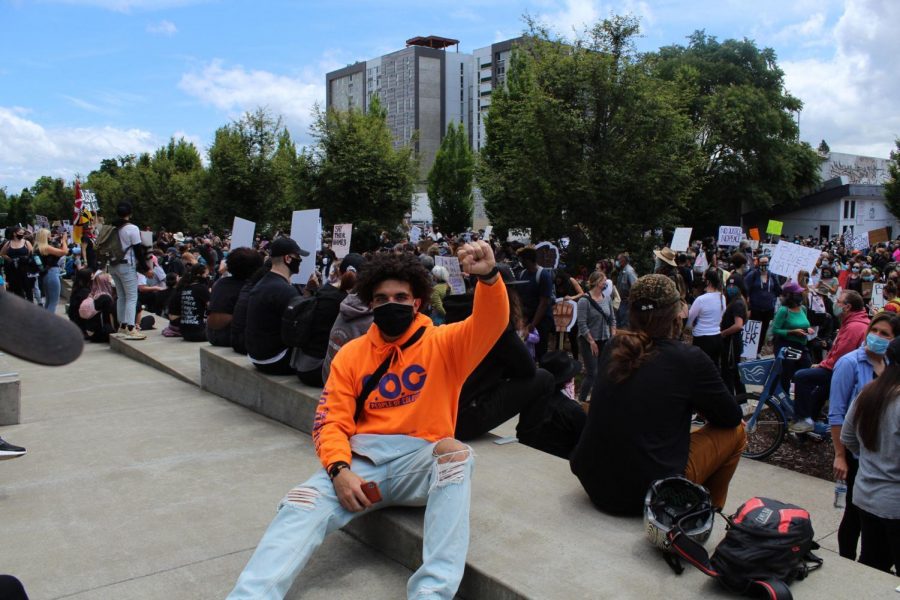 OSU Wrestler Adam Rateb  raises a fist and joins others at a Black Lives Matter protest.

Adam Rateb could be called a jack of all trades. A kinesiology major at Oregon State, an athlete on the school’s wrestling team, and more recently, a powerful and prominent voice for social justice.

Picking one of Rateb’s titles and choosing to label him as one role would be a disservice to all that he is. Yes, the senior wrestler is a successful athlete as well as a strong student, but Rateb is more than either of those things. Even more than the Vice President of Oregon State’s NAACP chapter, or being a member of the university’s Black Student Union.

Above all, Adam Rateb is a regular guy, regardless of his grades, community involvement or athletic accomplishments.

“I’m a normal person, man,” Rateb said. “People think, because I’m a student-athlete, [I’m] like some sort of celebrity… I just want to be a voice.”

Recently, Rateb has been meeting that goal of being a voice, using his own in protests throughout the state of Oregon and raising awareness on social media for the Black Lives Matter movement.

From Corvallis to Eugene, Rateb has already attended seven different protests in response to the May 25 killing of George Floyd in Minneapolis, Minnesota by the town’s police department. The goal of the protests, as Rateb sees it, is to raise enough awareness through the momentum of the Black Lives Matter movement to put an end to systemic racism in America.

But not only is Rateb attending these protests. He has also been leading the charge at a few of them as well. In two of the seven rallies and protests the Oregon State senior has attended, he has been handed the megaphone and given the opportunity to speak up.

“I’ve been to seven protests [and] I got to lead two of them that were here in Corvallis,” Rateb said. “They gave me the megaphone, and honestly, it gave me chills down my spine to be screaming and people chanting after me. It was awesome.”

Raising awareness is key for Rateb, as is educating the public on the issues that Black people face in America as a result of systemic racism. While encouraged and excited to see large masses engaging in rallies for Black Lives Matter, he believes that large scale change is most likely to happen when engaging with people on an individual level.

Through creating an open, honest dialogue on a more individual level, Rateb hopes that awareness and education can spread from person to person, as they take newfound knowledge and understanding to their families, who in turn continue to pass it on.

“Everything kind of starts in the household,” Rateb said. “If I wanted to see change in the long-run, it really does start with just educating yourself [and] having a dialogue. Just talking to someone, letting them understand perspective. Conversation is healthy. I think talking about this stuff has been put on the back burner for so long… something that’s going to make a change is if we just talk about it.”

Those issues on the back burner that Rateb mentions, those of police brutality born of systemic racism along with others, have been catapulted into the public eye as he sees it. While George Floyd’s death occurred over one month ago, the dialogue is still taking place, as protests across the country continue onward.

Rather than fading away in the public’s interest, Rateb views the Black Lives Matter movement as one that has built up a great deal of momentum through global rallies and protests, and has one that has kept that momentum up across the country.

“I was watching stuff on TV and on social media and I found that all 50 states had protests,” Rateb said. “Seeing so many allies I was like ‘yo, this is the time.’ People are open-minded. People are supporting. This is a great feeling.”

With that open-mindedness, along with the support coming from people in all 50 states and across the globe, Rateb has noticed a movement growing that is unlike anything he has seen in his lifetime, and one that he hopes the world will look back on as the start of major change.

“This is the biggest civil rights movement,” Rateb said. “This is the movement. I’m hoping this is the one that makes the biggest difference… We’ve come a long way in a short amount of time, but we just have to kill stuff at the system, at the roots… If this [systemic racism] is a tree, you can’t break down a tree by attacking at its branches. You have to break it down from its roots.”

The start to breaking down systemic racism, as Rateb views it, begins with “getting people in power” who want to see change. But with the momentum of the Black Lives Matter movement alone, along with the continued advocacy of Rateb and others, changes have started to occur– both on a local and national scale.

The Minneapolis Police Department, along with other departments in major cities like Chicago and Denver, have seen rule changes put in place that have updated the ‘use-of-force’ rules to prevent excessive force from happening on the job. And as protests continue on, statues have been removed and buildings have been renamed that memorialized figures from the Confederacy.

Changes have begun within Oregon State as well, most recently, with the university coming together with the University of Oregon to remove the ‘Civil War’ name that has been the official title of the rivalry between the two schools.

Continued momentum, as well as the changes brought about with it, have been a product of the raised awareness that Rateb has been preaching the importance of. Throughout social media, Black Lives Matter is still a topic of discussion. Throughout the country, Black Lives Matter is still holding rallies. But in order to see the wide-sweeping change that Rateb envisions, he still believes it needs to happen by going after the systemic source.

“Racism is systemic and systematic, we have to attack it where it started,” Rateb said. “I hope in the future people see this as the movement that changed everyone’s lives.”

Throughout his work as a voice for change, be it through tweets, through Instagram posts, or through a megaphone at protests, Rateb carries with him a sense of importance towards educating people as a way to spark change.

Alongside that importance towards education, Adam Rateb carries with him a quote from Thurgood Marshall, the founder of the NAACP, whose words echo the sentiments of Rateb himself, the student, the athlete, the voice for change.

“In recognizing the humanity of our fellow beings, we pay ourselves the highest tribute.” -Thurgood Marshall