Editorial: To report the full truth, The Baro must address the ways we have perpetuated systemic injustices 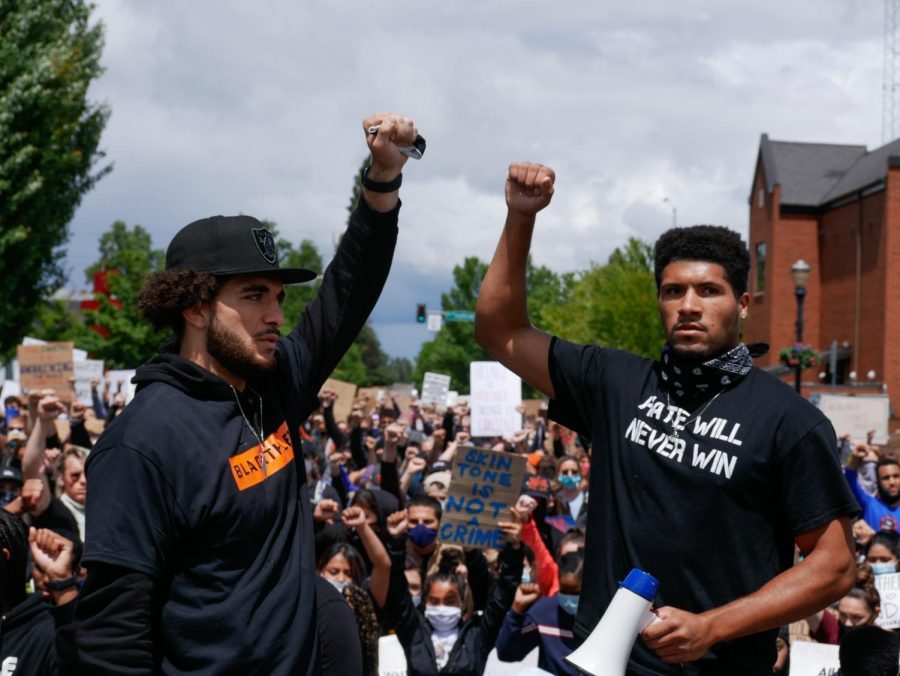 Hundreds of face mask-wearing marchers raise their firsts to signify their support for the Black Lives Matter movement during the June 7 "March for Black Lives."

Editorials are opinion pieces which reflect the majority view of The Daily Barometer’s editorial board.

Black lives matter. Black voices matter. The Daily Barometer stands in solidarity with those demanding an end to systemic racism. Standing behind these statements does not jeopardize our journalism ethics, because they concern matters of human rights and civil rights, and frankly should not even be up for debate.

As journalists, we do not take lightly our responsibility to be unbiased record keepers, watchdogs and teachers as part of a long-standing publication serving as a platform for community voices. The fact of the matter is that racism exists, and it makes Black people feel unsafe, demonized and disrespected. It exists in Corvallis, Ore., across America and across the world. We are cognizant of this, and are thinking critically about the voices and messages we are and aren’t amplifying in our reporting.

It is important for us to articulate our awareness that we have inadvertently caused harm in the past, and apologize. We have used language that has historically been used in a derogatory manner toward marginalized groups. We have failed to include the perspectives of marginalized groups, and have reported some policies and events as positive when the full context shows that they are harming oppressed groups. This is part of a broader trend within the news media, in which the truth is fragmented in favor of simplified narratives, unchallenged official dogmas and deference to prevailing ideological winds.

One such example of harm happened earlier this school year. We recognize that law enforcement bodies, while oftentimes essential sources, are by no means the be-all and end-all source. While reporting on the arrest of Oregon State University student Genesis Hansen, which some said involved excessive force and racial bias by the arresting officer, we called the Oregon State Police to ask whether the charges Hansen had been arrested on were legitimate. OSP assured us the charges were legitimate, and cited a specific statute, which turned out to be inapplicable in Hansen’s situation. As many know, Benton County District Attorney John Haroldson dropped the charges, saying he did not see the crimes Hansen was charged with occur in the body cam footage. Initially, we incorrectly reported that the charges were legitimate, because we viewed the police as an ultimate authority. Though we ran a correction as soon as we realized the mistake, we caused confusion and harm. We learned from this, but we regret that it happened in the first place.

Law enforcement voices are a crucial part of the story of protests occurring and systematic changes being set in motion, with important perspectives to share. Simultaneously, law enforcement officers have a powerful institution which can speak for them, and which has protected instances of police brutality for years. For many of the stories we’re writing right now, the voices of Black people must be at the forefront, because they are the ones speaking about abuses of power, and we have a responsibility to give those stories a platform so that they, too will be heard. It is not just law enforcement, either, in which systemic racism exists, but also in realms such as academia, including right here at OSU. No one individual, group or movement has a monopoly on the truth. We are working to accurately reflect this.

The Baro is a news media organization, and we know the word “media” has become unfortunately polarized as of late. People all over the world are losing faith in the news media. We recognize also that our staff is majority white, or at least majority white-passing, meaning while some of us are Asian or Indigenous, for example, we appear to be white and experience less racial discrimination than those who are perceived to be Black. We must actively work to confront our own internal biases, and to do better, or our reporting will perpetuate bias, which is the exact opposite of what we strive to do. With all of this in mind, it would be in conflict with the very spirit of honesty to promise to never again make our own mistakes or errors in judgement, as we’re human, too. It is imperative we pledge—and trust you, the community whose interests we serve, to help hold us accountable—to not diminish the complexity of every issue and the equal moral worth of every person.

The bottom line is that we, editors and journalists of a media organization, are in this job because we want to inform the community, serving as a resource to shed light on problems or abuses of power, a source of context for current events and a way for people to learn from one another and spur change. We don’t have ulterior motives. We seek to report the full, unbiased truth. Yet, we could certainly do better. We are working to recruit and retain journalists with diverse perspectives. We are working to elevate marginalized voices without tokenizing them ⁠— to feature these voices not just in stories where they are a key source solely for their marginalized identity. We are working to portray the full story for complex and deep matters such as the Black Lives Matter protests happening in our city and on our campus. This means critically evaluating whose faces we’re featuring on our covers, whose names we’re seeing in our stories and which narratives take center stage.

We will not stop working our hardest to bring you facts in full, and we will not stop reflecting on how we can improve. Our duty to remain unbiased does not excuse us from having to pay attention to the ways we contribute to systemic problems, even as we work to document these problems and the people they affect. We are here because we care deeply about all of you, and we are doing our best to be the resource you need for gathering facts and spurring dialogue as our community moves forward, rebuilding systemically racist institutions one by one.