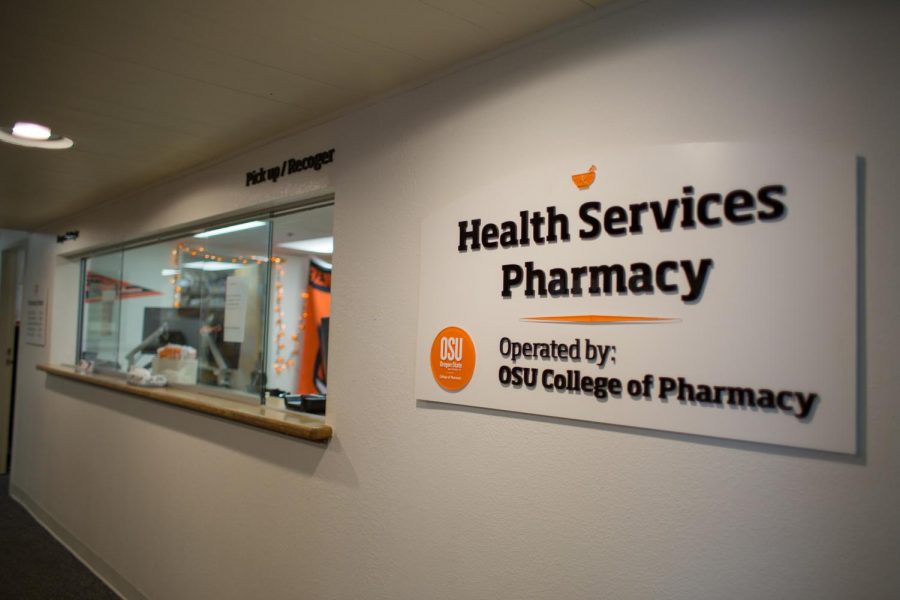 Editor’s Note: While the Health Services Pharmacy is operated by OSU’s College of Pharmacy, there are no current demands or allegations by students, staff or faculty against the pharmacy. This photo has been used to illustrate that the article is specifically addressing the concerns of the College of Pharmacy community.

A part of the code of ethics that Orange Media Network follows include minimizing harm; for this reason, a student name has been removed from this story upon request to avoid risk of retaliation in connection with a lawsuit related to the former dean of the OSU College of Pharmacy, who alleges that the university aided and abetted in retaliation against her when she reported student concerns of racial discrimination and sexual harassment last year.

Students in Oregon State University’s College of Pharmacy are standing up for their peers who have allegedly been discriminated against within the college and university due to their race.

A recent meeting between students made headway for the small group who are fighting for equality within their school. Over 70 students attended and listened as pharmacy students of color shared story after story of the harmful experiences they have endured within the College of Pharmacy because of the color of their skin.

As a result, many more students, faculty and alumni stepped forward to share their own experiences. Al Jones, class president of the 2022 cohort and appointed diversity representative and ambassador, Daniela Olivas Shaw, College of Pharmacy student ambassador and Raven Waldron, also a College of Pharmacy Ambassador and appointed diversity representative, looked at the problem their community was facing and began curating the Project Achieve Diversity.

The plan’s intentions were written in a draft by the PAD team. The document stated to “create strategic planning documents, organize peer College of Pharmacy students, and provide support for those students who have been most affected by bias and prejudice within the college and university.”

This effort was also accompanied by Caitlin Morris, College of Pharmacy student. Using the PAD foundation, members created an initiative detailing the goals and values of the group aimed to recruit peers who were interested in joining forces. A petition was also created and began circulating in order to gain enough traction to request a meeting with administration.

The student’s first request for a meeting addressing the death of George Floyd’s death was June 1. The first meeting took place on June 4 between students and the meeting with the Dean and representative from the Office of Institutional Diversity faculty member took place June 11.

Dean of the College of Pharmacy, Grace Kuo, and Vice President and Chief Diversity Officer Charlene Alexander and Assistant Director for Outreach Brandi Douglas agreed to a Zoom meeting with over 100 graduate and professional students in the audience.

Alexander is one of the university’s diversity leaders and works alongside partners to implement institutionalized change as needed to advance diversity and equity.

“The importance of advancing inclusive excellence at Oregon State has never been more important during these challenging times. Diversity is important to innovation and creativity, and strengthens our society,” Alexander said by email. “Additionally, the demographics of Oregon are rapidly shifting towards more racial and ethnic diversity, and as a community we must demonstrate how we are for each other.”

Alexander said she is fortunate to have a great team to work beside when questions of diversity are called to action. Alexander and her partners stay committed to their mission and work through issues in order to develop a plan to tackle problems that arise within the university, she said.

Accounts of the meeting as written by Jones, Shaw and Waldron stated, “Student leaders shared a list of demands, backed by research, that will help to improve the climate and environment in the College of Pharmacy. While Dr. Kuo and Dr. Alexander offered helpful resources already available to all OSU students, they also recognized the work being done by student leaders and the need for more intentional programs to be implemented by the administration to specifically support College of Pharmacy students.”

In the wake of this meeting, Alexander said all members of the OSU community need to be constantly mindful of all voices. She also said herself and her team’s decision making is always based on diversity, equity, inclusion and justice.

“I want to recognize our student leaders for their courageous work and efforts during this time,” Alexander said via email. “They continue to hold us accountable and ensure that we continue the momentum started through their engagement and participation in several town hall meetings.”

Since the meeting, members of the PAD have been assured that Dean Kuo is in meeting with faculty and staff within the College of Pharmacy addressing the demands and changes. Students hope these alterations will be implemented soon. At the time of publication, there are no updates from faculty addressing the PAD’s demands.

“We are confident that the college is committed to working with us to achieve the key needs we expressed in all the meetings and are already seeing improvements in transparency and speed of action in response to student concerns,” Jones, Shaw and Waldron said via email. “In the past week, the students involved have felt more seen, heard and valued than ever before in their entire time in the program.”