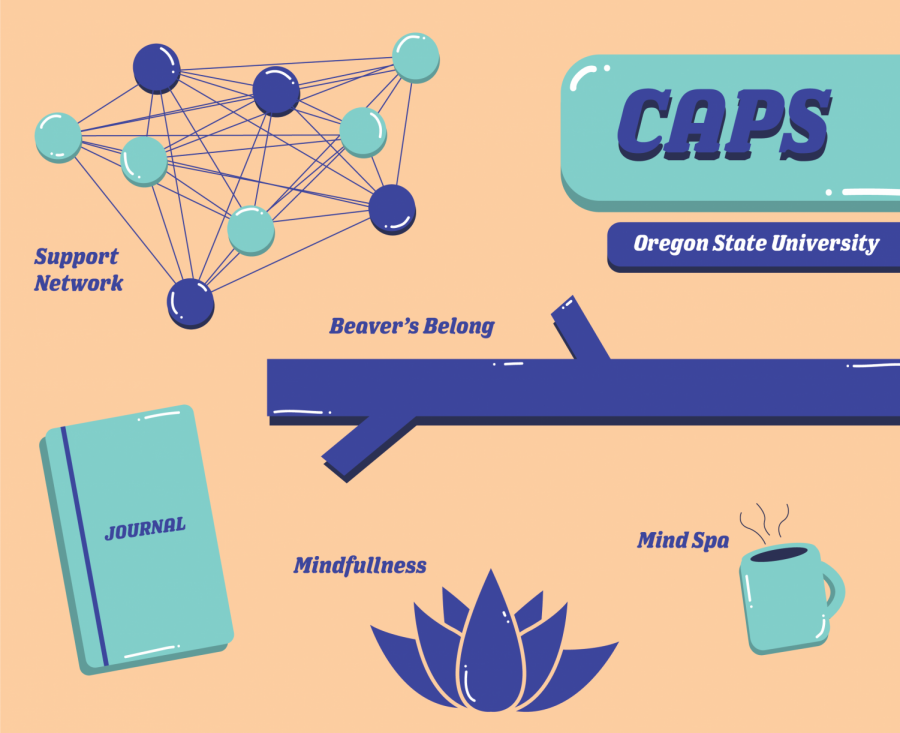 The transition from high school to college is oftentimes difficult for first-year students, and Oregon State University’s Counseling and Psychological Services offers a wide variety of programs and workshops to support students during their time at OSU.

The transition from high school to college is oftentimes difficult for first-year students, and Oregon State University’s Counseling and Psychological Services offers a wide variety of programs and workshops to support students during their time at OSU.

Bonnie Hemrick, assistant director of Mental Health Promotion, said the transition to college can be a challenge for first-year students since they are expected to be more autonomous and take on an adult role, many for the first time.

Sam Giaimo, a fourth-year psychology student and mental health student outreach assistant for CAPS, came to OSU as an out-of-state, first-year student. Giaimo said she had to manage the anxieties of both the transition to college and being away from home, and began seeking treatment through CAPS as a way to meet new people and manage her anxiety.

“That’s how I found a lot of friends, just by attending those events, and that’s how I kept myself busy, because I would not go out by myself,” Giaimo said. “So attending those workshops and those groups—and going to those events—you kind of see the same people over and over, and I got that support within that community.”

Giaimo said CAPS’ support network and Beavers Here Now, a meditation workshop, were among the most utilized and helpful resources for her as an OSU student.

“The student workers are the same every time, so you really build that connection with the community, especially now that I’m on the other end of it. Even if you don’t go to all the events, if you attend most of them, you’re going to see those same people and build that. That’s what helped me,” Giaimo said.

Alexia Navarrete, a third-year psychology student and a leader and facilitator for CAPS’ Beavers Belong Support Network, is from a small town in eastern Oregon, and said the transition to college was a significant change.

“I remember living in the dorms was a really difficult time for me. I lived with three other girls in one room and most of us did not get along,” Navarrete said via email. “Being an introvert, I felt very excluded and alone when I would see groups of students hanging out and having fun. Being away from home and not having too many friends definitely impacted my mental health.”

Navarrete said stepping out of her comfort zone and getting involved in clubs and organizations that fit her interests, like Psyched Out, CAPS, Beavers Belong and the OSU Newman Center, helped her build connections and friendships across campus.

“It’s normal for first-year students to feel alone during a big transition in their lives. It’s very important for us to normalize this feeling of loneliness and need for a community,” Navarrete said via email. “By doing this, students will be able to take advantage of these resources when they need them, without the stigma that comes with receiving help for mental health.”

Autumn Kolzow, a graduating senior in psychology and pre-med, executive director of Beavers Belong and chair of the OSU CAPS Board, was a transfer student when she arrived at OSU.

“Transitioning from high school can be tricky—you are in a different environment with new classes and people. Making friends can be difficult at first, but you just have to remember that everyone is in the same boat and eventually you will find students who share similar interests,” Kolzow said via email. “I would recommend familiarizing yourself with the different student organizations on campus and find one or two clubs to join, that way you’ll get the opportunity to meet others and potentially form student groups and/or new friendships.”

Megan Griffin, a third-year psychology major and director of leadership development for Beavers Belong, said her transition from high school to college was difficult since it involved moving from a smaller private high school to a large university. While the experience was initially intimidating, Griffin said she ultimately enjoyed the independence that accompanies attending college.

Griffin said becoming involved in campus activities and taking time for self-reflection have been important aspects in managing her own mental health.

“Especially in ten-week terms, it is easy to get stressed out and neglect our mental health as assignments and exams seemingly take over our lives. For me, it is during these hectic times that I need to build in self-care activities the most. If I am feeling especially stressed or discouraged, I like to take some time in my day to listen to music, exercise, spend quality time with my roommate, or even take a nap,” Griffin said via email. “I find that these activities put things into perspective, that while my education and other commitments that I am a part of are extremely important, my own mental health and well being should also be a priority.”

Dylan Young, a fourth-year chemistry and political science student and director of development for Beavers Belong, said he felt alone when he first arrived in Corvallis, since only two other peers from his high school attended OSU.

“It was stressful, scary, and I had no idea what to expect as a first-generation student,” Young said via email. “It overwhelmed me, and for the first few weeks, and really most of fall term, I felt completely alone and isolated.”

Young said he benefited from finding clubs and organizations on campus to call home.

“I would encourage anyone, not just first-year students, to use CAPS and programs like Beavers Belong. These programs are made to support you in some of the greatest years of your life, years in which you find yourself and pursue your dreams,” Young said. “The notion or idea that these programs are only for people who are struggling with mental illness is just not true. The truth is, we all struggle sometimes, some of us more than others, but it gets easier the second we reach out for help, especially from programs like Beavers Belong and services like CAPS.”

“Getting out there is usually the hardest part. I know there’s some stigma attached to it, and people sometimes feel like oh, I don’t need mental health support right now, so I’m not going to go there,” Giaimo said. “Don’t wait until you need it—just go out for the education, and for the awareness, and for the community. Getting over that mental block and just being there is probably the most helpful part.”

Giaimo also said it is important to continue to normalize conversations around mental health, and to attend workshops and programming like meditation, de-stress recess or speed friending with a group of peers.

“We are building the stress management skills that we’re going to use later in life right now. We’re discovering our independence, and usually, that doesn’t have to be a path that’s taken alone. I think it’s important to recognize that reaching out for support is not a weakness, it’s actually a strength. And developing those health habits now with all the resources that students have available to them—it can’t get better than that,” Giaimo said.

More information and the latest CAPS updates can be found on the OSU CAPS website.