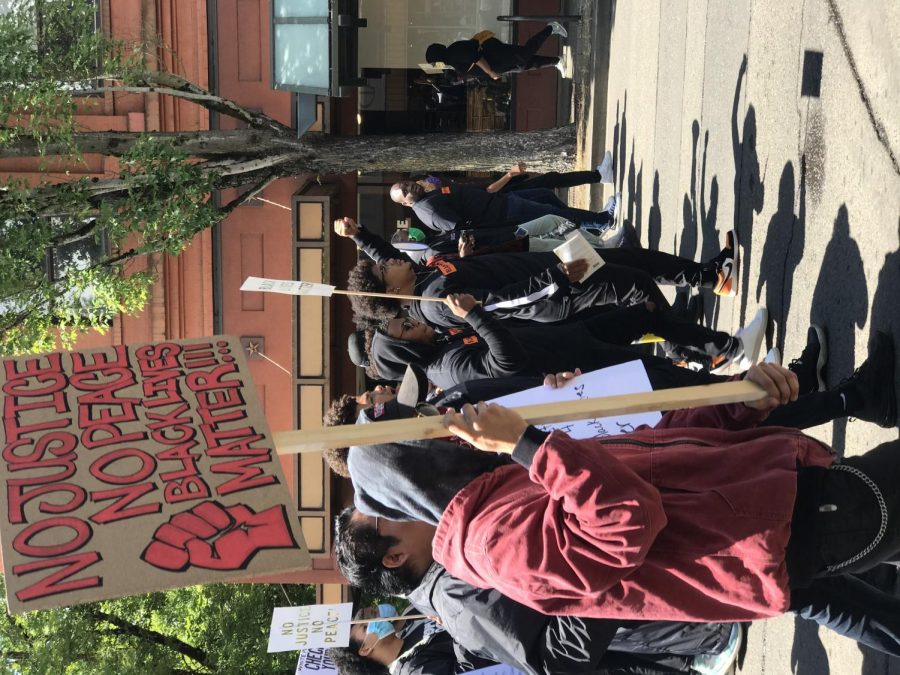 Several hundred protestors march through downtown Corvallis during the March for Black Lives on June 7, 2020.

Correction: This article previously listed an incorrect date for Breonna Taylor’s birthday. This mistake has been corrected.

Hundreds of people gathered in the Corvallis, Ore. Central City Park on Sunday, June 7 to join a peaceful march in solidarity with the Black Lives Matter movement, calling for an end to racism in America, and seeking justice for Black lives taken at the hands of law enforcement.

“March for Black Lives,” was organized by several Oregon State University students and Corvallis community members, including Sienna, Dee, Manju, James and Ashli, who declined to give their last names, as well as Roman Cohen and multiple others. During this event, many Black community members shared their experiences with racism locally, calling for change. Cohen, an OSU student, said he hopes the demonstrations will help create lasting change and get justice for lost Black lives.

“I really hope people remember the stories they hear. I hope it hits them so deeply that they never want to go back to ‘before’… we need change, and that change starts from within,” Cohen said. “I hope people continue to do the work, this is not just a one time and it’s over deal. This is for life.”

At 1 p.m. Sunday, many of these organizers formed a circle in front of the Central Park gazebo, surrounded by a dense crowd of face mask-wearing demonstrators covering nearly every inch of the park’s lawn. Then, the crowd fell quiet as one organizer stepped forward to speak and the event began.

Standing in front of several hundred attendees, the first speaker read a poem and explained the lessons his mother had taught him growing up as a Black man in America. The second speaker discussed Black history in the U.S., including Oregon’s history of racism, and the third speaker encouraged the crowd before the march began, saying, “Speak the truths of this movement—do not be silenced, we need you.”

At one point during the speeches demonstrators, in unison, wished Breonna Taylor, a Black woman who was killed by Louisville, Ky. police officers in her home on March 13, a happy birthday—as her birthday was June 5.

As the march began and headed east toward the Benton County Courthouse, organizers and several Oregon State University athletes, megaphones in hand, led chants. As the crowd marched through the streets of downtown Corvallis, chants included “Black lives matter,” “No justice, no peace,” “Hands up, don’t shoot,” “Everybody wanna be Black, until the cops come,” and “Hate will never win,” among others.

As the demonstrators made their way down SW Third Street, the staff of local businesses lined the sidewalks to watch marchers go by, some holding signs, some clapping and others chanting with the crowd.

At the courthouse, community members were given time to share their experiences. Besides an emcee, nine people in total stepped up to the microphone to speak, including students, Corvallis residents and an OSU faculty member.

“The Black Lives Matter movement is a worldwide movement as of now,” the first speaker said. “To everyone in the crowd today, in order to make change, you have to inspire change in yourself. Speak up when you see or hear injustice, educate yourself in social justice, check your biases and use your platform to make change.”

While the crowd stayed kneeling, more people stood up to speak, one after the other.

“We are working to create a change so none of us become the next victims to a gun, let alone a knee to the neck. All lives cannot matter until Black lives matter, okay? And if you’re one of those who can sit there and say ‘I don’t see color,’ please, take a second, because if you do not see our Blackness, then you do not see us,” said Ashli, an OSU student, the second speaker and one of the organizers.

The crowd responded with cheering and clapping before, during and after each speech. When one car drove by the courthouse during a speech, with people in the car shouting “All lives matter,” demonstrators remained kneeling, but yelled back, “Black lives matter.”

Next Dwaine Plaza, Oregon State University Faculty Senate president and employee for 23 years, stepped up to the mic and talked about seeing many faculty of color leave OSU at the end of each school year, including this year. He spoke of a need for a culture change in Corvallis and at OSU where Black people are more than just tolerated, but feel accepted and are not experiencing microaggressions like being passed over for invitations to socialize. Speaking with The Baro after the demonstration, Plaza used a fish tank analogy to describe the problem he sees with the way OSU responds to poor faculty of color retention.

“I like to use the analogy of a fish tank. So in a fish tank, when people create a fish tank, they try to put in a fish of every color and every stripe and every kind of strange look, because they are trying to build a fish tank,” Plaza said. “Now, unfortunately in this situation that I see myself in as I observe this, is that when one of those fish is about to die—one of the exotic ones—they just kind of let it go, like ‘oh well, that fish couldn’t survive in this environment because they are just not hearty enough.’ They need to take a much more holistic understanding of why that fish didn’t survive in that fish tank.”

The second-to-last speaker was Dr. Keith Harris, a gastroenterologist in Corvallis, who said he has experienced first-hand racism here. Harris said he owns two Porsches, and has been pulled over by police multiple times.

“I can’t tell you the number of times I’ve been stopped and made to sit on the sidewalk, minimized, humiliated, unheard,” Harris said.

Harris said he taught his kids what to do if they get pulled over. Keep their hands on the dashboard, and when the officer comes over, ask for permission to roll down the window.

The final speaker ended the event with eight minutes and 46 seconds of silence, the length of time Officer Derek Chauvin knelt on George Floyd’s neck.

Ameer Fofanah, OSU student and demonstrator who helped lead chants during the march, said he was pleased to see the large turnout, and that public attention is still on these issues.

Fofanah said he attends the protests to demand immediate changes, such as police being tried for murder when they kill Black people, as well as long-term shifts such as changing police union collective bargaining agreements, which can limit transparency and prevent disciplining of police.

Cohen said he organizes these protests to fight a corrupt system, saying and showing that enough is enough and to get justice for lost Black lives.

“I would like to see a change to the system, and that’s broad but what I mean is defunding the police completely. We have no need for police. Demilitarize communities, get rid of the prison industrial complex, invest in education, healthcare, social workers, and start investing in communities,” Cohen said. “Within Corvallis, this is all included as well as specifically to OSU, we need more Black, Indigenous, [People of Color] professors, we need more counselors who can relate to our identities. We need staff who are trained in social justice work, and so much more.”

There will be another march on Monday, June 8 at 6 p.m. in front of the Benton County Courthouse.