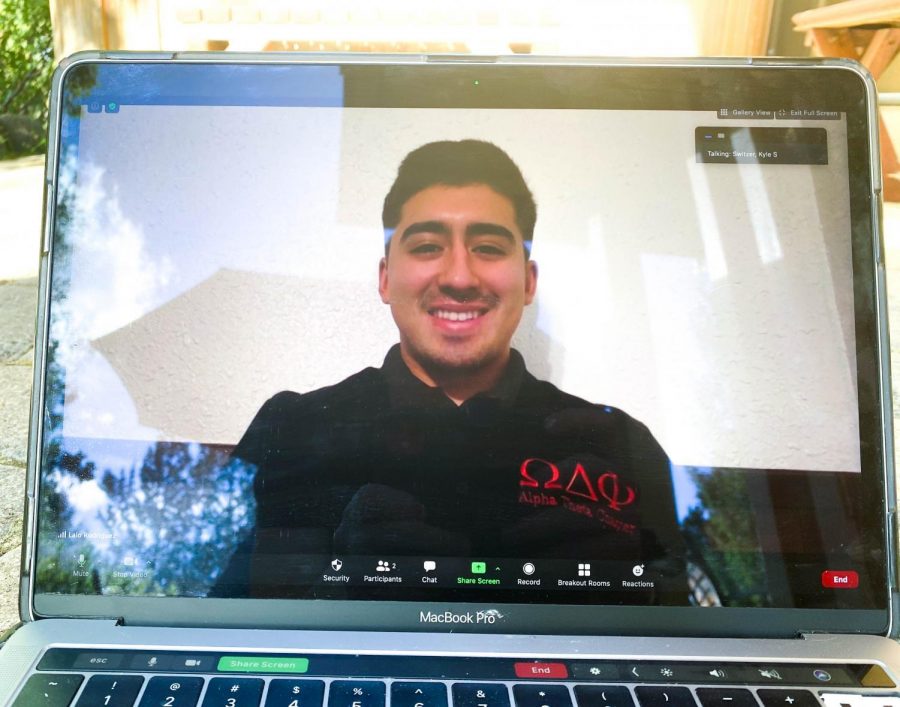 Lalo Rodriguez Amezcua, third-year fisheries and wildlife student and president of the Omega Delta Phi fraternity, smiles for a Zoom portrait. “Our chapter is currently Latino majority but we are welcoming to anyone. ODPhi gives us a space within our chapter and our council to surround us with people who all share the same concerns and experiences that come with being a minority attending a [predominantly white institution],” Rodriguez Amezcua said via email.

“A lot of us came to Corvallis not knowing anyone and we just want other people to experience all the good things that we have from our fraternity. The Multicultural Greek Community is one of the largest communities at OSU for people of color and I feel lucky to have found it,” Lalo Rodriguez Amezcua, third-year fisheries and wildlife student, said via email.

Trenton Joiner, fifth-year bioengineering major from the honors college, and former president of Phi Beta Sigma Fraternity, Inc. said he joined his fraternity because he wanted to represent something larger than himself, and give back and be a leader for his community, especially the Black community.

“I identify as a Black man in Greek life. I’m proud to be a member of the National Pan-Hellenic Council, made of historically black Greek-letter organizations,” Joiner said via email. “Greek life has helped me to hone my servant leadership and given me many important and lasting relationships. It has allowed me to grow, to impact the lives of others, and to help bring a culture to OSU that isn’t common here. I want other students to know that NPHC organizations are here, filled with welcoming black and brown faces. We stand for our communities, and we are accepting of all people regardless of their race.”

Marisa Lutz, fourth-year microbiology student and member of the Kappa Delta sorority said she has been a member of Kappa Delta for three years, and in those years, she has created lifelong friendships.

“As a person of color, it’s good to involve ourselves in activities that were traditionally a white-dominated activity. It is good to represent our ethnicity in Greek life to show we have a voice in the community,” Lutz said via email.

Rodriguez Amezcua, also president of Omega Delta Phi Fraternity Inc. Alpha Theta Chapter, said ODPhi is a multicultural fraternity and part of the Multicultural Greek Council. ODPhi was Latino founded, and the majority of its members identify as Latinos.

“Our chapter is currently Latino majority but we are welcoming to anyone. ODPhi gives us a space within our chapter and our council to surround us with people who all share the same concerns and experiences that come with being a minority attending a [predominantly white institution],” Rodriguez Amezcua said via email.

Lutz said one of her favorite events was the philanthropic, and the Mock Rock event that her sorority house held.

“We throw Mock Rock, which is a huge lip-syncing event and each house performs a song and dance to raise money for Center Against Rape and Domestic Violence and Prevent Child Abuse America,” Lutz said via email.

Rodriguez Amezcua said every Halloween season his chapter hosts a discussion around sexual assault and awareness, where members learn about consent, and afterward there is a dance on campus.

“We then host a Halloween dance on campus to give students a drug and alcohol-free environment to have fun and express themselves in costumes. We’re still not sure what’s going to happen in the fall as far as hosting events on campus, but be on the lookout for that,” Rodriguez Amezca said via email.

According to Lutz, being part of a sorority helped her academically because there was never a class that she took where she did not know someone through Greek life, and that her sorority also required her to maintain a certain grade-point-average each term in order to participate in events.

“We encourage our members to stay focused on academics by providing a space to study together, outside resources and experience from upperclassmen and alumni members to guide us and help us reach our ultimate goal of graduating our members,” Rodriguez Amezcua said via email. “We also provide opportunities to volunteer with the community and have various opportunities for members in leadership positions to go on leadership retreats [and] conferences.”

Rodriguez Amezcua said his fraternity collaborates with other organizations to host cultural-based events to cover a more diverse audience, where they have Hispanic food on occasion, and teach their participants about the culture behind it.

“[The] first two weeks of the term we have several recruitment events for anyone who wants to meet us and find out more about our brotherhood,” Rodriguez Amezcua said via email. ”We usually have several sport/game nights and informational meetings. Follow us on Instagram to get updated on those: @odphiat. We also like to throw barbecues throughout the fall and invite students who have shown interest in joining.”

“However, it will range from online to in-person depending upon the campus reopening. We welcome all students to participate and engage; to stay updated, check out our Instagram @gao_osu and @oregonstatemgc,” Pinoliar said via email.