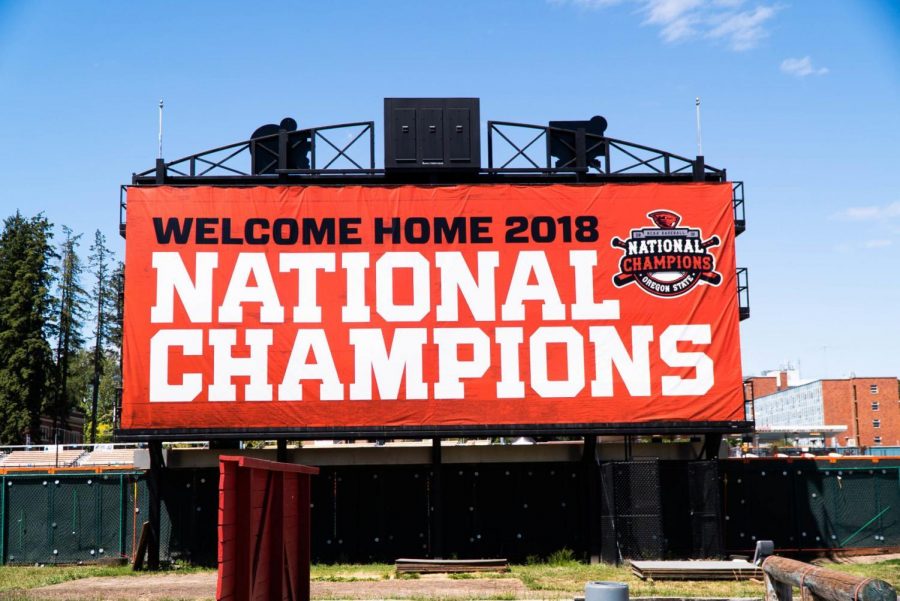 A banner welcoming back the OSU Baseball team after their College World Series win at Goss Stadium in June 2018.

But Oregon State’s road to that Game Three victory was anything but comfortable. After losing Game One to Arkansas in the finals, the Beavers were playing with their backs to the wall, with no margin for error heading into a Game Two that would go down as a classic.

The Razorbacks came into that Game Two with a little extra motivation outside of the shine of being crowned as baseball’s top team. They weren’t just looking to win the 2018 College World Series, they were looking to win their first College World Series in the history of their baseball program. With that added pressure on their shoulders, Arkansas delivered in the early innings.

Fehmel was able to make his way out of the inning on the next at-bat, forcing Arkansas’ third baseman Casey Martin into an out, but pitching duties would be taken over from that point forward by Oregon State’s left-handed sophomore Brandon Eisert.

The sophomore Eisert played well while pressed into early action, holding the Razorbacks scoreless through the third and fourth innings. From there, the Beavers were able to tie the game and eventually take the lead for themselves, thanks to a fourth-inning home run from sophomore catcher Adley Rutschman and a fifth-inning RBI bunt from junior shortstop Caydn Grenier that brought first baseman Zak Taylor home from third.

However, the Beavers’ lead would prove to be short-lived. After five strikeouts from Eisert through the third and fourth innings, Arkansas’ batters found their swing once again in the fifth inning. With runners on first and second after back-to-back singles, Arkansas’ designated hitter Luke Bonfield brought home a run with an RBI single. Two at-bats later, a single from second baseman Carson Shaddy would bring home another Razorback runner to bring the Arkansas lead to 3-2.

After a combined four runs through two innings, pitching took over once again. Eisert stayed in after his two-run fifth inning but managed to keep the Razorbacks scoreless until he was taken out in the eighth and replaced by right-handed freshman Kevin Abel. Arkansas made two pitching changes between the fifth and eighth innings, but kept Oregon State from scoring, taking the two teams to the ninth inning with the Beavers still facing a one-run deficit.

Arkansas kept their pitcher Matt Cronin in to close the game, and after walking Zak Taylor, it looked as though Cronin was set to send the Razorbacks home with a College World Series win.

Cronin recorded outs on his next two at-bats, but with Taylor on base, the Beavers’ first baseman was able to advance to third with two outs in the top of the ninth inning. With Caydn Greiner at-bat, his pop-fly foul ball looked as though it might end the game. But three Arkansas players were unable to record the out, giving Griener another chance where a left-field single brought Taylor home and tied the game once again.

But the Beavers were not done after one run. With the very next at-bat and Greiner on first, Oregon State junior right fielder Trevor Larnach blasted a two-run home run to right field, bringing the Beaver’s lead to 5-3.

From there, it came down to the Oregon State pitching lineup. Abel was taken out of the game after allowing a single to Razorbacks shortstop Jax Biggers and was replaced by sophomore Jake Muholland.

Muholland needed two at-bats to record the final three outs and send the Beavers home with a Game Two win. The first was a strikeout of Eric Cole. The next, a double-play while facing Casey Martin to officially end the game.

With the series tied at one game a piece, the Beavers went about their business in Game Three, winning in much less dramatic fashion and bringing home the program’s third College World Series title.