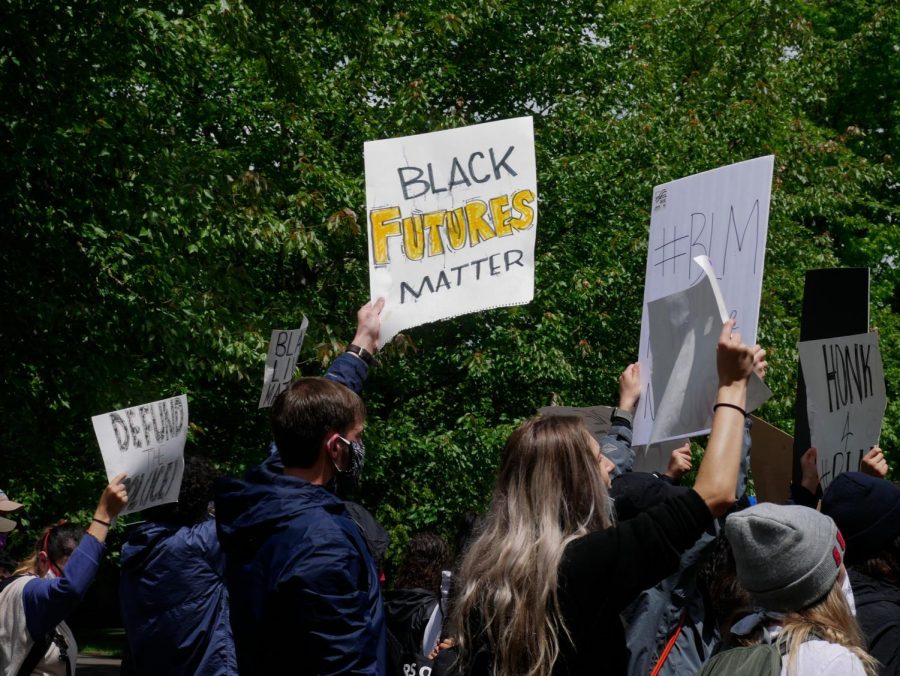 Face mask-wearing marchers hold signs and chant during the "March for Black Lives" on June 7.

Ed Ray, Oregon State University president, sent an email to all OSU students on May 31, calling for immediate action after the death of George Floyd. While some students applaud his words, others call the email ‘passive,’ thus writing a letter asking Ray to recognize the gravity of current events the Black community is facing, and empathy for students of color.

In Ray’s email, he said “We all have watched in horror videos being replayed over the past week showing the life of George Floyd brutally taken from him by a white police officer in Minneapolis, Minn., while three other officers, [who] sworn to uphold the law, looked on in indifference. The officer who killed Mr. Floyd was arrested and all four of the officers were fired, but the other three officers simply went home.”

In his email, Ray said police brutality against people of color had to stop, and that the new chief of police Edgar Rodriguez, with the help of the incoming president F. King Alexander, would help to continue the advancement of inclusive justice and opportunity at OSU.

Ruta Faifaiese, fourth-year human development and family sciences student, wrote a letter in response to Ray’s email, asking the university to consider how Black students may be struggling with their classes due to nationwide protests sparked by the recent killings of Black people in police custody around the country. The letter obtained more than 500 signatures from OSU students and alumni who agree with Faifaiese’s message in less than 24 hours. Faifaiese’s letter addressed the high need to provide accommodations and support for Black students, faculty, staff and community members at Oregon State University.

“The intention behind the email was clear; however, the message ignores key details of anti-Black violence and is particularly dismissive of the inequities experienced by Black communities. We want to address the problematic statements in your email and provide concrete ways to take actionable steps both before stepping down on June 30 and transitioning into OSU’s new president, F. King Alexander, on July 1,” the letter written by Faifaiese said.

Jordan Bautista, fourth-year human development and family sciences student, one of the editors of the letter and also a signee, said the way Ray’s email addressed the current violence against the Black community seemed passive.

Ray sent an email response to Faifaiese and the signatories of the petition, where he said he appreciated the suggested actions from the letter, and he was saddened that his words lacked care for OSU’s Black student, faculty and staff community.

“Going forward, I commit to review the action items you suggested and understand the ways in which the institution is not living up to those expectations. Initial action steps already are being taken, including Provost Ed Feser’s communication this week encouraging all OSU faculty to provide additional support and flexibility to students at this time,” Ray said in his response email.

On June 3, Edward Feser, provost and executive vice president sent an email to the OSU community on behalf of himself and Ray.

Feser wrote in his email, “Our Black students, faculty and staff are hurt, grieving, exhausted, frustrated and angry. What is playing out in our cities and in our media—yet again stark evidence of the creeping slowness by which our society is coming to grips with what it is and what it faces—is all too viscerally familiar. Yet our Black colleagues and students continue to work, teach, conduct research, serve Oregon’s communities, attend to their families and friends and learn. Their bravery and resilience are humbling and an example for everyone.”

Feser’s email also explained how teachers have been advised to be flexible and empathic with students that have been impacted by current events.

“Whether you are teaching a campus-based remote class or on Ecampus, please allow appropriate flexibility in the form and timing of assignments, final exams and other requirements,” Feser said in the email sent to the OSU community. “Remind all of your students of their option to switch their courses to S/U grading—a policy put in place in response to COVID-19. They have this option through the end of this week. Encourage your students to talk with you. It is true that students must meet their academic responsibilities; yet, current circumstances warrant flexibility in how they meet those responsibilities.”

In Ray’s response to the petition, it was also stated that the Office of Institutional Diversity, under the leadership of Vice President and Chief Diversity Officer Charlene Alexander, will host conversations with Black faculty, staff and students in the coming weeks regarding their specific needs, and is also planning to hold dialogue sessions with the student community regarding this matter.

“I would invite you and others on this email to engage with me and senior OSU leadership in a review of the action steps you have outlined, and specifically the seven action steps identified as not having been carried out,” Ray said in his email response. “Beginning in July, I ask that you engage and work with Dr. King Alexander as he assumes the role as OSU’s president. I know that he holds strong values for inclusive excellence, support for students, faculty and staff of color, and success for all. His track record at California State University Long Beach and Louisiana State University attest to his commitments.”