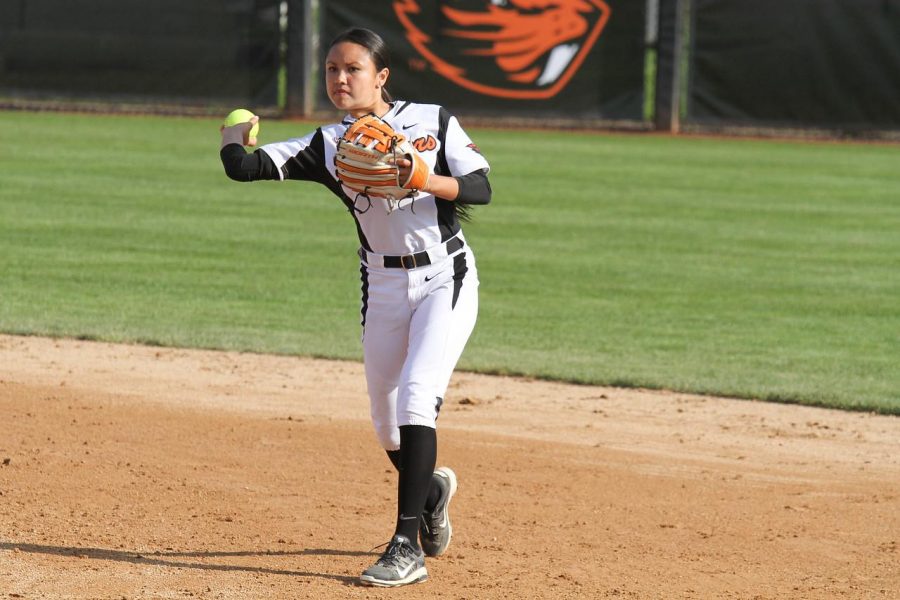 Junior infielder Mikela Manewa pulls back to let one fly toward home against Arizona at home April 4, 2015.

One of the most successful seasons in the history of the Oregon State Beavers’ softball program came back in 2005, where, by the middle of the season, the team was in the midst of a historic run.

The Beavers came into 2005 with heavy expectations on their shoulders, being ranked 16th in the country by the time of their first game of the season. But Oregon State lived up to the title with one of the best years in program history, a season that saw them reach as high as sixth in the country, win a share of the PAC-10 title, and reel of a school-record breaking 22 consecutive wins.

But the cherry on top of that historic run in 2005 came on April 12 when the Beavers, ranked 13th at the time, took to the road against the second-ranked Arizona Wildcats and pulled off a 1-0 win that was a long time in the making.

Before that 2005 match, Oregon State had struggled against the Wildcats, losing their previous 16 games with their last win coming in 1999. Winning by a slim one-run margin, nothing came easy for either side, and both the Beavers and Arizona went into the sixth inning deadlocked at 0-0.

Sophomore shortstop Mia Longfellow was able to break the scoring seal in the top of the sixth after an errant pitch from Wildcats’ All-American pitcher Alicia Hollowell sent Longfellow home from third base, an error that would end up making for the deciding run.

Longfellow hit her way on base in that sixth-inning with a one-out single, followed directly after by another single from freshman utility player Cambria Miranda and a bases-loading walk of junior first baseman Vanesa Iapala.

The Beavers maintained that 1-0 lead throughout the contest, but not without a rally from the Wildcats and some theatrics on Oregon State’s end. After the Beavers took the lead at the top of the sixth, Arizona went to work and tried to even the score in the bottom of the inning.

But Oregon State was able to record three outs in style, the first coming on a diving catch from sophomore center fielder Natalie Johnson, the second on a backhand grab from Iapala, with the final out coming from junior catcher Lisa Allen catching Arizona’s pinch-runner Adrienne Acton in an attempt to steal.

In what was a strong pitching duel all night, Oregon State’s sophomore pitcher Brianne McGowan ended with the upper hand. McGowan struck out eight Wildcats’ batters during the contest after pitching all seven innings, recording her 18th complete game of the season, and boosting her overall record to 23-2 with 19 consecutive wins.

It was the 19th straight win for McGowan, but the win against Arizona marked the 20th consecutive victory for the Beavers back in 2005, a mark that was already historic for the program before they got their 22nd win.

The win was historic for the Beavers, and marked another high point in a 2005 season that was full of them.