The Daily Barometer • May 22, 2020 • https://dailybaro.orangemedianetwork.com/2578/daily-barometer-sports/omn-sports-bracket-region-4-of-winter-mens-sports/ 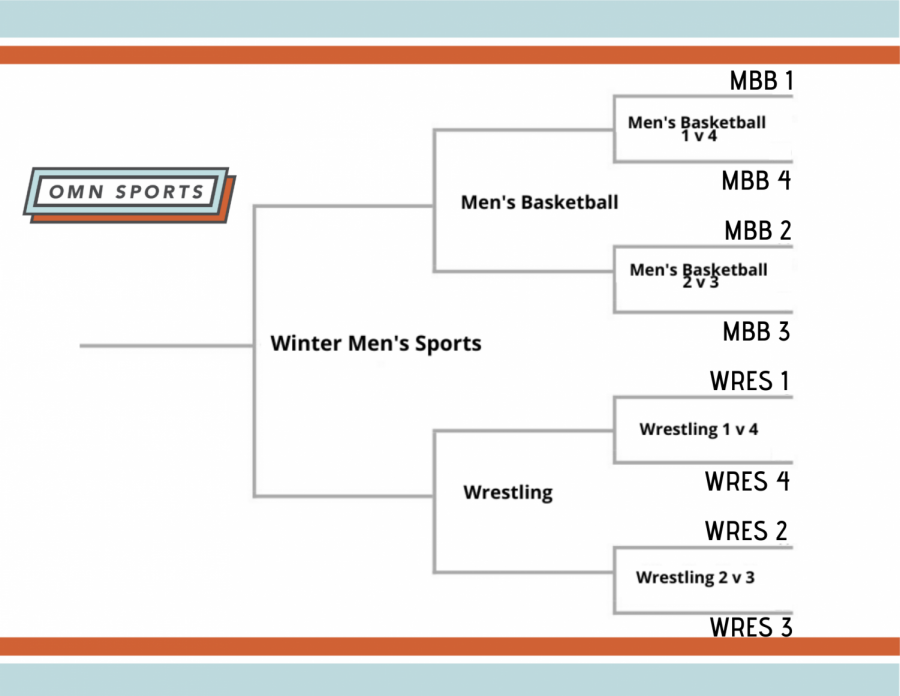 OMN Sports presents the last eight events for the bracket on the best plays and moments from OSU Fall and Winter Sports. Voting for the rounds is available on OMN Sports social media platforms, including Facebook, Instagram and Twitter.

The Beavers erased a double-digit lead by the Utah Utes in the second half of their opening round of the PAC-12 tournament, but it was Jarod Lucas who sealed the victory. With 1.8 seconds remaining on the clock, Lucas shot a three-pointer to push the Beavers ahead 71-96. The Utes were unable to score before the final buzzer. Lucas’ shot was a redemption of sorts for the freshman guard, as he previously missed a game-winning 3-pointer on Feb. 22 at Arizona State.

Zach Reichle was the hero for the Oregon State Men’s Basketball team on Feb. 8 as the Beavers knocked off their rival Oregon Ducks by a score of 63-53. Reichle was a large part in the victory as he had a ferocious breakaway dunk with his strong left hand coming off a Ducks turnover, which gave the Beavers a 50-48 lead with 2:52 remaining. At the time, it was the Beavers third consecutive win over the Ducks dating back to the 2018-2019 season.

On March 6, Oregon State senior forward Tres Tinkle made history. With three minutes remaining in the first half, Trinkle sank a three-point shot to pass Gary Payton and become OSU’s all-time leading scorer, and seventh overall on the PAC-12’s all-time scoring list. Over the course of the game, Tinkle scored 23 total points to lead Oregon State to a 68-65 win over Stanford.

In what was viewed as a potential resume building game early in the season, the Oregon State Men’s Basketball team faced off against the visiting Iowa State Cyclones at Gill Coliseum on November 9th, 2019. Beaver center Kylor Kelley beat opposing Cyclone defender Zion Griffin on a sharp cut for a powerful, two handed slam electrifying Gill giving the Beavers a 70-68 late in the game. Kelley added another dunk on the following possession helping the Beavers secure a 80-74 win over a Big 12 opponent just two games into the season.

Oregon State’s redshirt senior star Devan Turner got off to a hot start in the conference tournament and never looked back, winning in both of his tournament matches en route to a PAC-12 Title. Turner, the 133-pound wrestler, was listed as a number one seed and given a bye in the quarterfinal round. His first match of the tournament came against Arizona State’s redshirt senior Joshua Kramer, where Turner was able to secure a victory by decision with a score of 11-5. That took Turner into the Finals, where he went head to head against junior Paul Bianchi of University of Little Rock, Arkansas for the PAC-12 title, eventually winning by a 5-3 decision. The conference victory pushed Turner into the NCAA Tournament for the second consecutive year.

Heading into the dual meet against the Campbell University Camels, redshirt sophomore Grant Willits knew that he would be facing off against a tough opponent. No. 9 Josh Heil was coming off a finals appearance at the Midlands Wrestling tournament in December 2019, which is one of the hardest collegiate wrestling tournaments in the country. Willits, who was coming off a three-match winning streak, proved that rankings did not matter, and would defeat Heil by a score of 7-1. This win won Willits the PAC-12 wrestler of the week award, and would help aid Willits in his national rankings, being ranked as high as No. 27 in the country.

Redshirt sophomore Lane Stigall proved to be a threat to the PAC-12 conference when he took out two former PAC-12 champs in the same season. In January 2020, Stigall defeated 2018 PAC-12 champ and No. 21 in the country Josh Maruca of Arizona State by a score of 5-3 in Tempe. And just a month later, in February 2020, Stigall would defeat 2019 PAC-12 champ Requir van der Merwe of Stanford. Although Stigall would miss out on qualifying for the NCAA Wrestling tournament, Stigall proved to the conference and to the nation that he is a threat in the collegiate world of wrestling.

For Oregon State’s senior wrestler Colt Doyle, his Jan. 10 victory over Northern Colorado’s redshirt junior Alan Clothier marked a lot more than an individual win. That January victory for the Beavers 184-pound wrestler was not the first time that he had squared off against Clothier, but it was the first win he had against the Bears’ wrestler. The two had met twice before earlier in the month in the Southern Scuffle, where Clothier won both matches against Doyle, setting up for a revenge game on the tenth when the Oregon State Beavers had their home opener against Clothier’s Northern Colorado. Doyle took advantage of the opportunity, winning the match by a 4-2 decision and avenging his two losses from earlier in the season.