The Daily Barometer • May 8, 2020 • https://dailybaro.orangemedianetwork.com/2588/daily-barometer-sports/omn-sports-bracket-region-3-of-winter-womens-sports/ 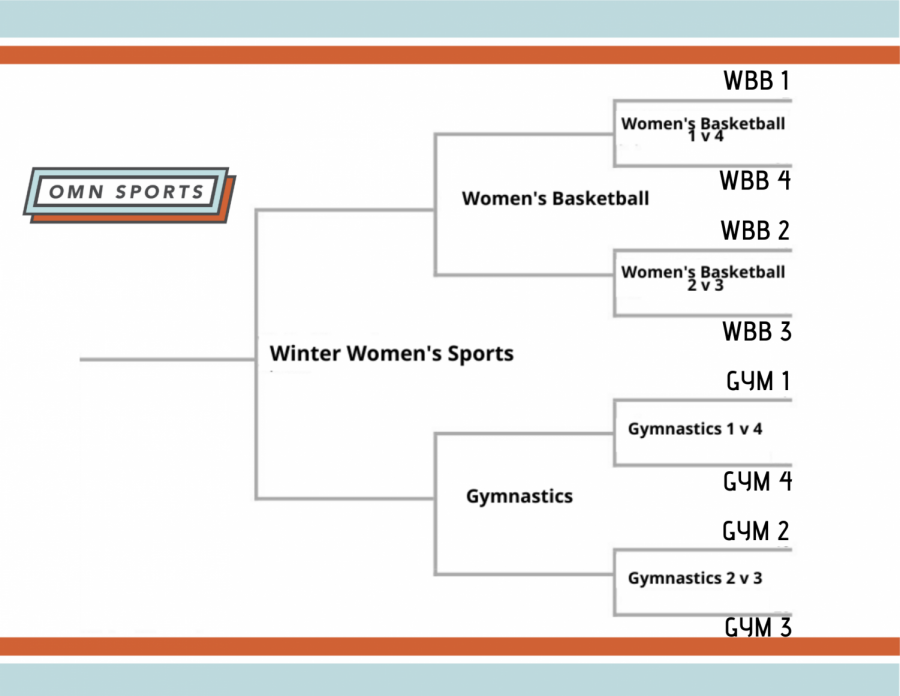 OMN Sports presents the next eight events for the bracket on the best plays and moments from OSU Fall and Winter Sports. Voting for the rounds is available on OMN Sports social media platforms, including Facebook, Instagram and Twitter.

With less than half a second remaining in a tied game, OSU senior guard Mikayla Pivec made a game winning shot to defeat Arizona State. Coming off an inbounds pass by junior guard Aleah Goodman who had the ball on the baseline, Pivec raised up from near the free throw line to redirect the Goodman pass towards the basket. After bouncing on the rim a few times, the ball went in and the crowd of over 5,700 people in Gill Coliseum erupted to celebrate the win. It was Pivec’s second game winner of the season, as she defeated the Arizona Wildcats with a late winner in January.

The USA Women’s national basketball team traveled to Gill Coliseum on Nov 4, 2019 in the continuation of a West Coast swing for the USA team where they faced off against other PAC-12 elites. The Beavers were in the game early, showing grit against the most talented collaboration of women basketball players on the planet. After being down only 36-31 at the half, the Beavers fought hard, but it was too much and too little as the USA women won 81-58. Overall, the matchup was an opportunity for the OSU Women’s Basketball team to meet and compete against the best professional women’s basketball players in the world.

Senior Mikayla Pivec put on an exhibition in draining long heaves of the basketball throughout her four year career as a Beaver. The former team leader and third round draft pick of the Atlanta Dream capped off her last team win in dominant fashion, beating WSU for the second consecutive game by winning 82-55. The game was highlighted by a shot from Pivec at the logo in center court to end the first quarter. Pivec was in a running motion and flipped the shot up like a lay-up. It hit the back of the backboard softly, before falling into the front of the rim for a three-pointer, giving the Beavers a 29-12 lead after the first quarter.

After defeating UC Irvine, Pacific and DePaul, the Beavers took the title of preseason WNIT champions with an 11-point win against Missouri State at Gill Coliseum. The team outscored opponents 333-260, and senior guard Mikayla Pivec took home the tournament’s MVP award with averages of 17.8 points, 10.8 rebounds and 6.3 assists in the four games.

Bouncing back from head injuries, OSU senior gymnast Sabrina Gill exceeded expectations in her last weeks as an Oregon State gymnast, earning an all-around score of 39.250 in the meet against Washington. Competing in all four events, Gill scored 9.725 on vault, 9.900 on bars, 9.775 on floor and 9.850 on beam.

In a meet that went down to the wire, Oregon State beat Stanford. After the Beavers posted season high marks in beam and vault, junior Kaitlyn Yanish scored a 9.90 on floor routine to push the Beavers past Stanford, extending their win streak to two.

Senior Isis Lowery scored a season high 9.875 on bars in a tri-meet with No. 9 Louisiana State and Arizona State. The Beavers easily outscored ASU but lost by a mere 0.10 point to LSU, placing second in what would become their last tri-meet of the 2019-2020 season.

Oregon State sophomore gymnast Kristina Peterson posted a new personal best on the beam, scoring a 9.85 versus No.3 UCLA. Peterson performed a lone appearance on beam, resulting in an impressive score for the Beavers.