The Daily Barometer • May 6, 2020 • https://dailybaro.orangemedianetwork.com/2592/daily-barometer-sports/wednesday-win-osu-mens-rowing-strong-showing-in-seattle-2019/ 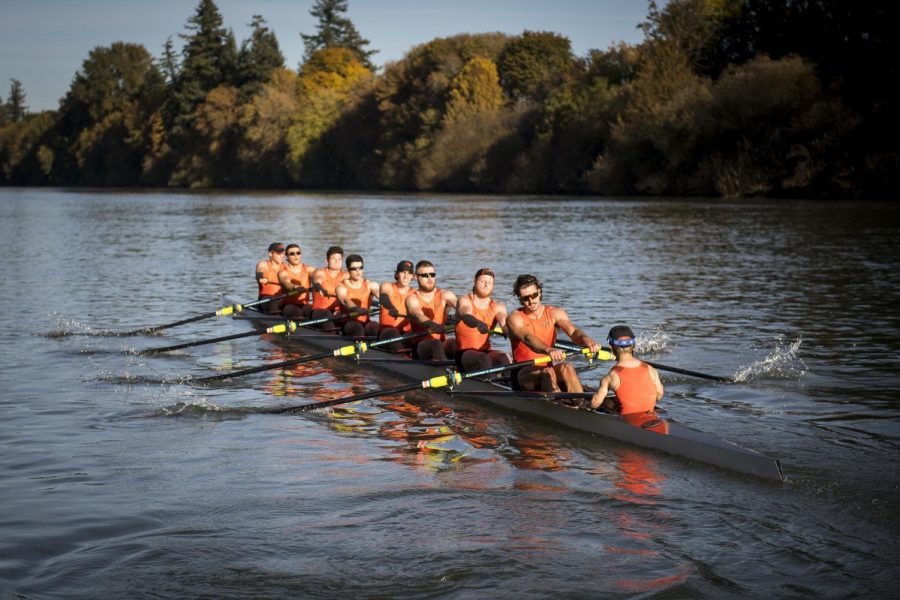 OSU Men's Rowing practices in Fall 2019 for their fall season. The team's spring season was cut short due to COVID-19.

Oregon State Men’s Rowing finished their 2019 fall season on a high note, finishing a respectable second in the Varsity 8+ class at the Head of the Lake Regatta in Seattle on Nov. 3, 2019.

Hosted by Washington and the Lake Washington Rowing Club, the 40th edition of the event started on Lake Union and continued through the Montlake Cut into Lake Washington, finishing near the UW Conibear Shellhouse.

Finally, OSU had three entries in the Champ Men’s 4+ event, with the “A” entry coxed by Garrison and crewed by Montoya, McDonald, Niedermeyer and Wilson, finishing fourth overall with a time of 17 minutes and 44.128 seconds. OSU’s B and C teams finished sixth and seventh overall, respectfully.

“Ben Garrison taking a gutsy line on the inside of the UW boat in the 4+ with a relentless push was huge for us to finish the day. He crept through them down the entire Cut so (we) had the best line around the final turn,” said OSU Men’s Rowing head coach Gabe Winkler in a press release. “The winter training is where you go behind closed doors until the spring season. This gives us some fuel for the next few months to feed off of.”

Two weeks later, the Beavers completed their fall schedule with the annual Orange & Black Regatta on Nov. 16, 2019O. Although the team had a great showing in the Lake Las Vegas Invitational on Feb. 29, the remainder of the 2019-20 season has unfortunately been canceled due to the novel coronavirus pandemic.