The Daily Barometer • May 25, 2020 • https://dailybaro.orangemedianetwork.com/2595/daily-barometer-sports/berg-is-just-like-everybody-else/ 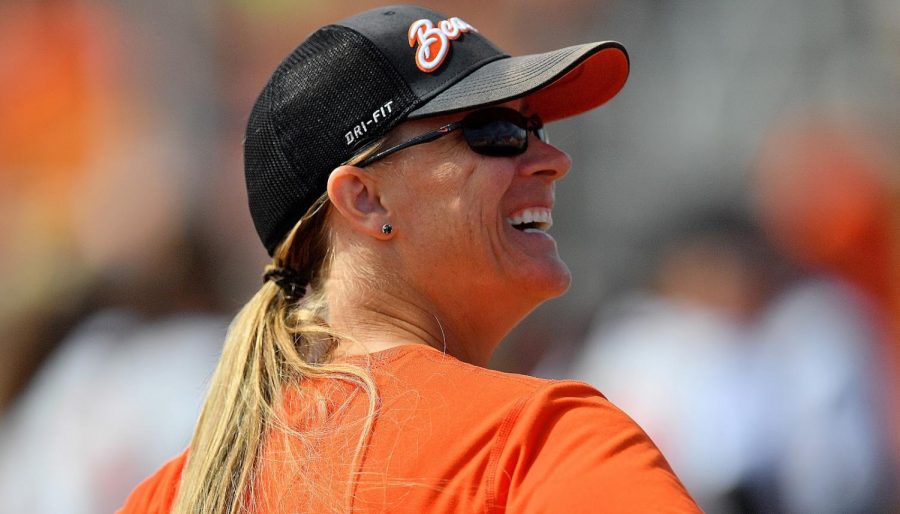 Oregon State Softball head coach Laura Berg is an Olympian champion who enjoys playing pranks, has bees and served as a Los Angeles police officer. Berg is in her eight season as head coach.

When you hear the word “Olympian,” what comes to mind?

Perhaps it’s Michael Phelps’ 2008 performance in Beijing, Tommie Smith and John Carlos raising a fist in 1968, or even Simone Biles’ performance in the 2016 Olympics. As far away as these athletes may sound, you don’t need to look far to find someone whose Olympic resume is in this same tier. Oregon State Softball is led by one.

Laura Berg, who had her eighth season as head coach cut short by COVID-19, has three gold medals and a silver medal on her Olympic resume. Her appearance as a player at four different Olympic Games makes her the only four-time olympian in softball history, and one former coach considers her to be one of the best center fielders he ever saw play the game.

“I think [she’s] one of the phenomenal athletes that we’ve had in the sport. Obviously she had a lot of durability playing as many years as she did,” said Mike Candrea, who coached her with the national team.

Candrea, whose 1,633 career wins make him the winningest softball coach in NCAA history, described Berg’s coaching potential as “unlimited,” and cited her growing experience coaching with the national team as a reason why.

“I think that experience in itself really helps you as a coach to understand that you have to be prepared for anything,” Candrea said. “That experience with her being able to take our elite athletes, and be able to make them better, I think forces any coach to become a student of the game… You have to do that to stay ahead of the curve.”

For Berg, the national team experience is, in fact, helping her grow as a coach.

“Every summer I want to bring something out from the USA team and carry on over into Oregon State. One year when I was with the junior team, [it] was trusting the players and being more patient,” Berg said. “One year it was dealing with umpires… every year I come away with something different.”

Though her role as head coach of Oregon State Softball is being impacted by the current COVID-19 outbreak, she’s still finding ways to work with her players. Under normal circumstances, her days would start by constructing a weekly plan for practice and game planning for future opponents during the morning. Once the afternoon arrived, the team would practice from about 2-5 p.m.

Now, with quarantining and social distancing rules in place, Berg said her ability to work with players is limited.

“There’s not a whole lot that I can do with them physically; I can’t require them to do workouts. I can give suggestions, but I can’t require it and I can’t get feedback from them on it,” Berg said. “They check in with me once a week to kinda just check in and make sure they’re doing okay with their classes, getting what they need and making sure mentally that they’re doing alright.”

According to junior pitcher Mariah Mazon, the limitations haven’t stopped Berg from trying to help them grow as athletes. Along with words of encouragement, Berg has started a book club of sorts, with the first reading set to be “Chop Wood, Carry Water.”

“I’m pretty sure she said the book is about leadership and how to be a leader on the team, so that’s just one of the ways that she’s still been a coach for us,” Mazon said. “She’s been doing really well even though we can’t necessarily speak face to face.”

Though her role at OSU is different under current circumstances, her head coaching career was started at Oregon State. After spending a few years as an assistant at Fresno State and then one year assisting at Oregon State, Berg was subsequently promoted when former coach Kirk Walker resigned.

Bob De Carolis, who was the Oregon State Athletics Director at the time of Berg’s promotion, couldn’t remember the exact number of applicants, but he said there were “a healthy number” of people who applied for the position.

Despite the large number of candidates, it was Berg’s demeanor that helped her get the job.

“Sometimes being a great athlete doesn’t necessarily translate to being a good coach,” De Carolis said. “But as competitive as she was and accomplished as she was, she never put it in your face. It was always a calm look that ‘We can get this done.’”

Before coming to Oregon State as an assistant, there was a period of time where Berg was away from softball. After stepping down from her position at Fresno State to play in the 2008 Olympics, Berg spent time as an officer in the Los Angeles Police Department.

Though coaching softball and working as a police officer may seem to be on opposite ends of a spectrum, Berg said there were parts of her experience that became applicable to her role as a coach. Most notably, the importance of effective communication.

“It’s real easy to assume people are understanding you, and there are times where they can have no idea what you’re talking about,” Berg said. “[You need] to be able to articulate yourself so the players understand what you’re meaning and what you’re requesting of them.”

Despite the intimidation that may come when interacting with a four-time Olympian and former police officer, both Candrea and Mazon said she’s known for showing a different side.

What she’s known for other than her extensive Olympic career? Practical jokes. According to Candrea, that included pulling a prank on a sitting president during practice at the 2008 Olympics in Beijing, China.

“Laura had this little thing she would always do. She would put her hands in the chalk and then she’d pat you on the back and you’d walk around with this hand print,” Candrea said. “Not many people would do that to the president, but Laura did… You were always aware that Laura Berg was around and that anything could happen.”

Some Oregon State players have tried and failed to prank their head coach. Mazon says there’s only one rule to the jokes: it can’t involve snakes. According to Mazon, the seniors tried to get their coach last season, but were outsmarted.

“The seniors pulled a prank on her, I think it was last year, and they sticky noted her car,” Mazon said. “I don’t know how, someone must have told her because she knew about it before and she snuck round back and scared them when they were recording her, waiting for her to come out.”

Pranks aside, Mazon describes Berg as “the coolest person ever” when away from softball, and noted that the team has made trips to Berg’s home during the holiday season.

“During the holidays like Thanksgiving she invites us all over to her house, and shows us her chickens and her beehive,” Mazon said. “She’s a really cool person outside of softball and I’m thankful that she’s allowed us to see that side of her.”

Though COVID-19 has cut their season together short, this year’s trip to Coach Berg’s likely won’t be the last for seniors. On March 30th, the NCAA approved a measure which would allow schools to self-apply an extension of eligibility for spring-sport players who had their seasons cut short.

In other words, seniors who had their seasons abruptly ended have the possibility to return for another year. This decision is one that everyone interviewed for the story was thrilled about.

“I was elated, I was just so excited. As an athlete you know there’s a chance of an injury happening and it ending your season prematurely, but nobody thought a pandemic would have ended the season the way it did,” Berg said. “Nobody should lose a year to something like that.”

“I think that was the right answer to the question,” De Carolis added. “The NCAA handled it correctly.”

Though the season may have ended prematurely, this pandemic will pass and the team will get back together. Led by one of the most decorated Olympians in American history, Mazon has one reminder about her head coach.

“I always think about ‘yeah she’s an Olympian and everything,’ but behind it all she’s a person,” Mazon said. “She’s just like everybody else.”