The Daily Barometer • May 8, 2020 • https://dailybaro.orangemedianetwork.com/2613/daily-barometer-news/osu-community-members-express-concern-about-police-culture-gun-violence-in-public-safety-dialogues/ 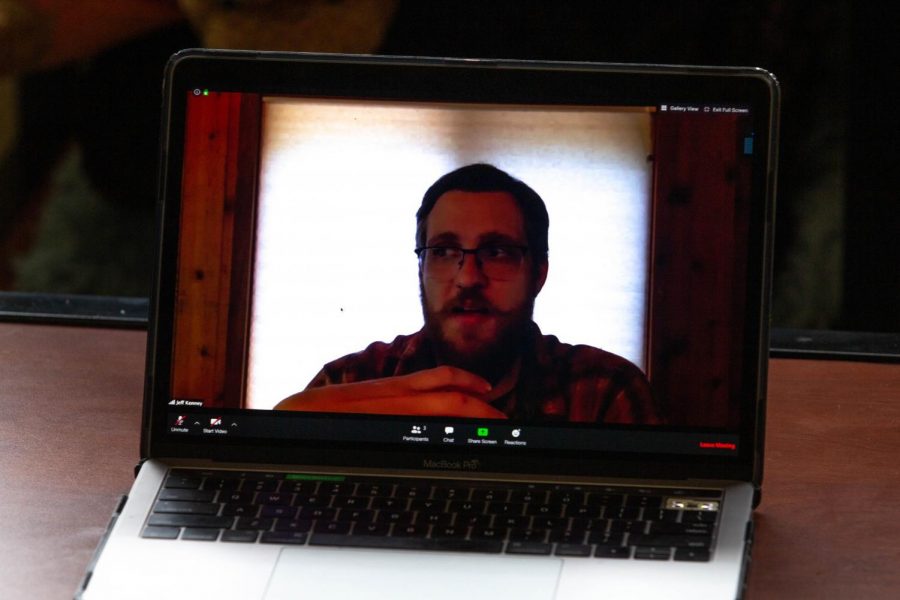 Director of Institutional Education for Diversity, Equity and Inclusion, Jeff Kenney, talks about the input received during the public safety community meeting held over zoom on April 22 and April 23. Kenney helped lead the community sessions, and said key themes that emerged from the dialogues included a desire for public safety officers to represent the demographics of the student body, and a desire to train officers and develop an organizational culture that represents the values of the university.

Following the announcement that Oregon State University will develop its own on-campus law enforcement by July 1, the university held two remote Public Safety input sessions on April 22 and 23, in which community members engaged in discussion and expressed concerns regarding the hiring, culture and armed status of the new police force.

Director of Institutional Education for Diversity, Equity and Inclusion, Jeff Kenney, helped lead the community sessions, and said key themes that emerged from the dialogues included a desire for public safety officers to represent the demographics of the student body, and a desire to train officers and develop an organizational culture that represents the values of the university.

“A desire for training that emphasizes the mitigation of implicit bias, equips officers with de-escalation techniques—that there’s increased transparency, and predictability about the actions, behaviors, jurisdiction of officers and other public safety personnel,” Kenney said. “Those are probably the most resounding conversations that I’ve witnessed and the documentation from my own experience.”

Kenney said there was also an expressed desire for a minimal presence of armed officers on campus, and for minimal response time in a moment of crisis. Kenney noted that there is a federal requirement for the university to staff an armed officer due to the nuclear reactor on campus.

Samuel Burns, an OSU graduate teaching assistant and master’s student in applied anthropology, said he previously worked for Public Safety as an undergraduate student at the University of Michigan, who had a campus police force similar to OSU’s proposed in-house law enforcement.

Burns said he is concerned about the culture of the police department that would be established at OSU. While OSU must have an armed officer due to the nuclear reactor, Burns said he hopes to see a demilitarized, non-combat campus police force, where regular officers who interact with the public on campus are not armed, but have the ability to step into an armed role if a situation presents itself.

“Every inch we move towards a more militarized police state is a move against public safety, especially the safety of marginalized members of the public, such as students of color, people with disabilities, people with mental illnesses, immigrants and the LGBTQ community,” Burns said.

Linda Brewer, senior faculty research assistant II in the Department of Horticulture, said she joined the input sessions due to an experience at age 22, when a man was shot down in front of her in her workplace in St. Louis, Mo. Brewer expressed concern about the culture and armed status of the new on-campus police force, and referenced the killing of a man by the Portland State University police force in 2018.

“I’ve been concerned since there was a shooting at PSU by the campus police. I am all about organizational culture, and certainly the culture at PSU is vastly different from the culture at Oregon State, but when public authorities respond with fire power, sometimes things happen that can’t change,” Brewer said.

Burns, likewise, expressed concern about firearms on campus, and also drew connections to the 2018 PSU shooting.

“I’m terrified that, a few years from now, when I’m back home in Michigan, I’m going to open up the news, and see a story in the Daily Barometer about an OSU student shot and killed outside the Valley Library by a cop who thought they were homeless,” Burns said. “That’s a serious concern of mine, and I think it’s something that needs to be talked about on a daily basis on this campus.”

Brewer said she has tremendous compassion for law enforcement in the United States, since many citizens are armed, but said she is concerned about armed on-campus police and the possibility of misunderstandings that could result in the death of a student.

Mykl Nelson, an instructor of urban agriculture, said he hopes the university will be purposeful in its hiring of the new police force.

“I’d like to see employment critically examined. Rather than simply hiring bodies to fill empty positions, maybe we can re-work those positions to reflect a new set of goals for our community,” Nelson said via email. “Arresting people is a terrible way to solve most public safety concerns. If we want to change the culture of transit and road safety in our town, then we need to do so through a more productive and collaborative manner, not a punitive one.”

Alicia Ward, an OSU graduate research assistant and master’s student in public policy, participated in the dialogues due to an interest in lowering rates of police violence, particularly after the incident involving OSU student Genesis Hansen and Oregon State Police last year.

“My idea was to have the least police force presence on campus as possible. Except for the ones who have to be armed for the nuclear [program], the other ones shouldn’t be armed, and racial equity should be their top priority,” Ward said.

Rachael Cate, an OSU program developer and instructor, served as a notetaker for the recent Public Safety input sessions.

“A strong theme was the kind of engagement with the community we want these officers to have, and a concern for officers that represent our culture accurately,” Cate said. “And, that they are not just a policing force, but have some educational, preventative roles that can serve us in ways that are not just based on policing punishment and fear, but working with the community to uphold community values of education, and caring for each other and support of each other.”

The notes from the dialogues are given to the OSU Public Safety Committee and the Board of Trustees, according to Kenney.

“The decision by administration and by the Board of Trustees is ultimately in the interest of the content that’s coming out of the dialogues, because much of the dialogues asserted community members’ desire for increased institutional agency in who our police officers are, how they’re trained, and how they’re supervised,” Kenney said.

Overall, Kenney said he is proud of the participants who showed up for the dialogue.

“I think they were rich, and challenging and honest and vulnerable, and I’m hearing consistently

that many of the folk involved really deepened their understanding of themselves and one another,” Kenney said. “I think that’s not made possible by our structure—that’s made possible by the people who show up to it. And so it’s made me proud of Oregon State.”