The Daily Barometer • May 12, 2020 • https://dailybaro.orangemedianetwork.com/2684/daily-barometer-sports/sports-breakdown-basketball/ 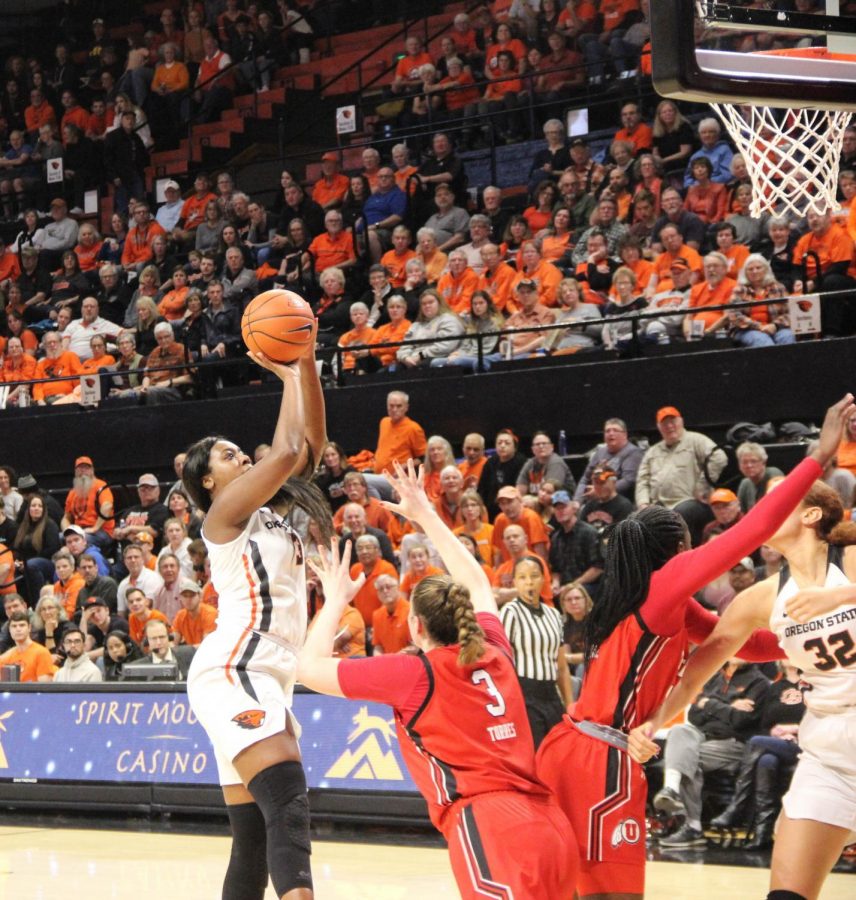 OSU senior guard and forward Madison Washington goes up for a shot against Utah Utes sophomore forward Andrea Torres on Jan. 3 in Gill.

Naismith, a Canadian physical educator, had the goal of keeping athletes busy and indoors during the cold winters. He also saw it as a safer alternative than football. The sport he created was played with teams of five whose goal is to try to score the basketball through the hoop while the opposing team defends. When Naismith first invented the game in Massachusetts, they used a soccer ball and peach baskets as hoops.

The game picked up enough steam until it was recognized at the collegiate level in 1905. The standard size of a court that is typically seen for high school is 84 feet long and 50 feet wide while the National Basketball Association (NBA) court is slightly longer at 94 feet long and 50 feet wide. Basketball is a timed game with the winner being the team with the most points at the end of regulation. College men’s teams play two 20 minute halves, college and Women’s National Basketball Association (WNBA) teams play four 10 minute quarters and NBA teams play four 12 minute quarters.

Naismith originally created the game through a set of rules which helped set the framework for the game. These thirteen rules were as follows.

The ball may be thrown in any direction with one or both hands.

The ball may be batted in any direction with one or both hands.

A player cannot run with the ball. The player must throw it from the spot on which he catches it, an allowance to be made for a man who catches the ball when running at good speed.

The ball must be held in or between the hands and the arms or body must not be used for holding it.

No shouldering, holding, pushing, tripping or striking in any way the person of an opponent shall be allowed. The first infringement of this rule by any person shall count as a foul, the second shall disqualify him until the next goal is made, or if there was evident intent to injure the person, for the whole of the game, no substitute.

A foul is striking the ball with the fist, violation of rules 3 and 4, and such as described in rule 5.

If either side makes three consecutive fouls, it shall count a goal for opponents.

A goal shall be made when the ball is thrown or batted from grounds into the basket and stays there. If the ball rests on the edge and the opponent moves the basket, it shall count as a goal.

The umpire shall be the judge of the men and shall note the fouls, and notify the referee when three consecutive fouls have been made.

The referee shall be the judge of the ball and shall decide when the ball is in play, in-bounds, to which side it belongs and shall keep the time. He shall decide when a goal has been made and keep account of the goals with any other duties that are usually performed by a referee.

The time shall be fifteen-minute halves, with five-minute rests between.

The side making the most goals in that time shall be declared the winner. In the case of a draw, the game may, by agreement of the captains, be continued until another goal is made.

The rules have evolved to include a three-point shot which is 23 feet and 9 inches. The three point line was introduced to the NBA in 1979 and college games in 1986. The three-point shot has helped the game advance into what it is today. Other changes also include more distinctions about fouls and fouling out. Players must evolve to the everchanging basketball scene at both the college and professional levels.

Basketball: Round, orange ball used for dribbling, shooting and scoring in the game of basketball.

Hoop: The target area; where the basketball is supposed to go. Consists of a metal rim and net.

Pivot: A player must have one foot stationary while not dribbling the ball. This foot must remain in the same spot, while the other foot may be moved to help find a different position. The ball cannot be held stationary for more than five seconds. Any movement of the stationary foot will result in a travel. A player who just received the ball via a pass or rebound may choose to pivot, dribble, pass or shoot. Should the player choose to dribble, they may do so and end their movement with a stationary pivot foot again. However, after this final stop, they cannot dribble again and must either shoot or pass the ball away.

Travel: A travel occurs when the ball is not being dribbled and the player takes steps without dribbling the ball. A travel can also occur with a shift in the stationary foot in a pivot or when a player attempts to dribble again after coming to a stop.

Over and Back: When a team receives possession of the ball, generally after their opponents make a shot, they will have a baseline in-bounds play under their opponents hoop. The team must put the ball into play within five seconds, and the team has limited time to get the ball across the half court line and into their offensive side. If they cross the half court line and at any point cross back over into their opponent’s offensive side of the court, the over and back penalty will occur and will result in switching possession of the ball.

Jump Ball: This occurs when both teams are attempting to gain possession of the ball at the same time and have equal claim to the ball, resulting in a stop of the game by the referees. The resulting possession decision of the ball will be recognized based on the possession arrow, which tracks who this default will go to throughout the game. The arrow alternates based on who was given default possession last.

Three Pointer: Longest shot in the game, worth the most points. Configured by an arched line, the NBA three point distance is 23 feet and 9 inches.

Two Pointer: Any shot taken inside of the three-point line.

Free Throw: Uncontested shots awarded to players who were fouled while taking a shot. Players may not cross the free throw line while taking these shots.

Zone Defense: Defensive scheme where players guard an area rather than an opposing player.

Man Defense: Traditional defense in basketball where players guard each other as coaches try to expose strong matchups.