The Daily Barometer • May 11, 2020 • https://dailybaro.orangemedianetwork.com/2740/daily-barometer-sports/beaverman-continues-to-be-hopeful-spreads-school-spirit/ 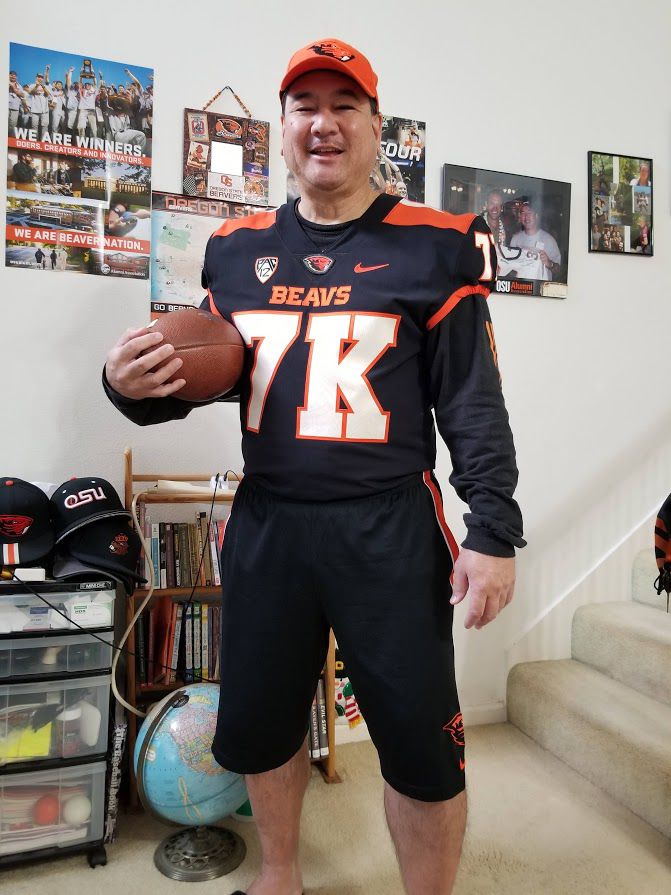 Marvin "Beaverman" Yonamine poses in a custom OSU Football jersey, gifted to him from the OSU Athletics department, to mark his 7,000th day in a row of wearing OSU gear.

But for Yonamine, it is consistently wearing Beaver gear every day for the past 7,070 days. He even uploads a picture every day on his Twitter (@MarvinBeaverman) for proof of his progress.

The story of the legendary “Beaverman” started after the Beavers defeated the Notre Dame University Leprechauns at the Fiesta Bowl on Jan. 1, 2001. The win came after the Beavers had a losing record in football for 28 years in a row.

“From the season before, I started to buy a few OSU shirts. And the 2000 season was a magical season, we ended up number 4 in the nation,” Yonamine said. “As you know, we beat Notre Dame in the Fiesta Bowl, which was 41-9. And that’s the first day I started counting the days I wore my shirts.”

Ever since that day, Yonamine eats, breathes and lives everything Oregon State. He even visits Corvallis twice a year to cheer for the Beaver football team. Unfortunately, his trips to Corvallis will have to be put on hold, not just because of the pandemic itself, but also because Yonamine has been taking care of his mother since the pandemic started.

“I’ve been cooking, cleaning, doing all her laundry. Basically, I’m taking care of my 92-year-old mom, because she’s very old,” Yonamine said. “The only problem with that is I used to be able to go up to Corvallis twice a year to watch OSU sports. That’s temporarily on hold, as I’m a caretaker for my mom.”

And even though Yonamine is a huge Oregon State sports fan, he respected the decision of the PAC-12 to cancel the sports seasons for the rest of the academic year.

“Public health and safety is the most important thing,” he said. “Being a college sports fan, it would be selfish of me to want things to continue on, and put student athletes, student managers, and coaches lives at risk. So that was the correct thing to do. So even though I wanted to watch Beaver baseball, that was the correct decision,and I respect that decision to cancel all the sporting events, so I have no problem with that.”

But it is not just the loss of sports that Yonamine has to deal with. He also has to deal with the fact that the pandemic is now “the new normal,” but he is seeing this as a learning opportunity, both for himself and for the human species as a whole.

“Just like everyone else, it’s the new normal,” Yonamine said. “But it makes you appreciate the things you have in life, and it makes you realize that the world doesn’t revolve around myself as an individual. It makes you think a lot more about your existence as a human being, and what good you can do in this world. There’s only one human race, and we have to stick around and fight this pandemic.”

And like many others around the country, Yonamine is excited for things to get back to normal, not just for himself but also for Beaver Nation.

“I’m excited for life to get back to normal in a college town, when people are able to walk around campus, be in classes with their friends, go to sporting events on campus, being able to go to American Dream Pizza,” Yonamine said. “I just wish everything would go back to normal, because Corvallis really is a special place.”

Yonamine was hopeful for those in Beaver Nation who might be struggling during these trying times.