The Voice of the Beavers 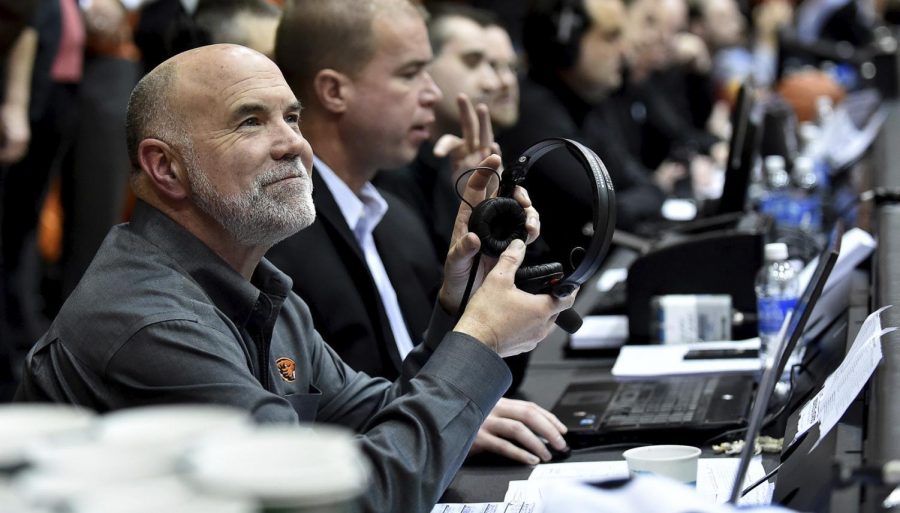 Picture this: It’s a warm spring Friday evening at Goss Stadium, a soft breeze blowing in from the east, and the ever so alluring smells of hot dogs and buttered popcorn, with just over 3,000 people filing in for the opening pitch as the beavers take the field. Remember these days?

You may have taken the short walk through campus to the comfortably situated ball park. Depending on where you are sitting, you may even have a nice view of Reser Stadium and Gill Coliseum, with the sun beginning to set just over the intramural fields on campus. Imagine your eyes passing the fields to the right where Weatherford Hall sits, beaming in its red brick at the rest of campus with the sun shining on it. You may also be at home sitting on your couch with a cold beverage and the barbecue grill on in the back after a long day, or tuning into the radio on your commute home from work.

As therapeutic as a spring Oregon State Baseball game at Goss Stadium may sound to some, as fans it may be easy to forget to appreciate the not-so little details of sports. Whether you are physically at the game or not doesn’t matter as much, because you’ve got something else. The game is about to begin, and you turn up the speakers of your car or television to a soothing voice. The commercial break stops, “We welcome you in on the Beaver Sports Radio Network.”

Any Beaver fan in the last 21 years that has a conscience will proudly know “the voice of the Beavers” as the incomparable Mike Parker. Parker, a six time Oregon Sportscaster of the Year, will be entering his 22nd season in the fall of 2020 at this position after taking over the job in the spring of 1999.

Growing up in southern California, Parker got his first exposure to sports over the radio at 7 years old. At his neighbor’s house, he walked into the garage where his friend’s father was.

“I didn’t even know what baseball was,” Parker said. His friend’s father was listening to legendary sportscaster, Vin Scully, who called Dodgers games for an absurd 67 seasons and thereby became an almost untouchable figure in the sports world. Parker recalls this moment very fondly, as he chuckled when reminiscing on the details of the story.

“What are the Dodgers?”

“Well, they’re our baseball team,” Parker said, repeating what his friend’s father said on his recollection of this experience.

Parker went home after that and asked his own father if they had a radio that he could tune into games with. From there, he became a sports fanatic of the Los Angeles teams at the time: the Dodgers for baseball, the Lakers for basketball and the Rams for football.

“I came to sports through the radio. I had a link and lifeline to sports at a really young age.”

Parker grew up in southern California, but his family left the big city in 1973 when he was 14 years old and headed north to Cottage Grove, Ore. Parker went to Cottage Grove High School, and eventually went to none other but OSU’s rival, the University of Oregon.

“My goal professionally was always to be a radio announcer, to call the big three sports: football, basketball and baseball,” Parker said.

Parker thought he would have been a Duck fan for life by actually pursuing a role as the voice of the Ducks.

“They’re my least favorite team now actually,” Parker said, despite his respect for the school.

Parker worked numerous jobs at the beginning of his career after he graduated, including radio positions in Portland, Ore. and as the voice of the former Portland Beavers Baseball team. He worked for at least some sort of radio broadcasting from 16 years old in high school, until now in 2020. Parker paid his dues, and finally got in the door of the OSU Beavers in 1999.

He was given the chance to call some baseball games at the beginning of former Beaver Baseball head coach Pat Casey’s career in Corvallis. Sure enough, they liked what Parker was able to do, and hired him full time to cover the radio for football, basketball and baseball.

The timing was great, as OSU Football head coach Dennis Erickson was just beginning his unforgettable stint, leading the Beavers to their first winning season in 28 years.

“To come into OSU in ‘99… and the following year winning the Fiesta Bowl,” Parker said, “when there was so much joy, and meaningful, exciting, compelling games.”

Even if the highs did not always last for football, Parker appreciates the moment no matter the stage, through football coaches after Erickson with Mike Riley, Gary Andersen and now Jonathan Smith. With basketball, he has seen a variety of coaches from Eddie Payne, to Ritchie McKay, Joay John, interim Kevin Mouton, eventually Craig Robinson and finally Wayne Tinkle. Parker has seen the best and worst of coaches and characters.

“The year of ‘06 for the beavers, to win the national championship in baseball, and then winning ten games in the fall for football. It would be ‘06,” Parker said about a favorite season or year that he could recollect.

When questioned about his favorite memories at OSU, his favorite season was obviously ‘06, but he recalls even more fondly of his six trips to Omaha, Neb. for the College World Series, but the three first trips especially in ‘05 and then winning back-to-back national championships in ‘06 and ‘07.

“Our daughters were young. Some of my favorite times in my life,” Parker said, rewinding the memories of his trips to Omaha and experiences at the zoo, markets or other activities outside of sports, showing the importance of his family and how the best memories have not always been strictly sports infused.

Towards the end of our phone call, I requested a favor of  a quote that Mr. Parker could muster up a way to be able to describe his time at Oregon State. He paused for a moment, then asked me if I knew the 1984 Robert Redford film, The Natural. Being a sports and film fan, it was an easy yes, but I wanted to see where this was going. Parker explained that the book, The Natural, was written by Bernard Malamud, who taught at the then OSU College in 1952.

After being asked this question, he paused. Perhaps, the pause he used was to capture the moment with a little drama, as he naturally can when calling sports games to set the tone of a particular situation. Or just to genuinely find a way to tie all of his experiences together on the road he has traveled at OSU. Regardless of what it was, the response was beautiful.

“They come and they go Hobbs, they come and they go… but I’m always here,” Parker said, quoting the character Max Mercy played by Robert Duvall. “I’ve been here long enough in the last 20 years, but to see the ups and downs of the players and programs.”

A fitting quote used by the man who so perfectly fits the position he has held for the last 21 years at OSU. Sportscasting creates a draw to individuals and their positions, especially if they have been with one program for so long. However, finding a way to create a following of respect and care is something that Parker has culminated in the last 21 sports seasons from Beaver sports fans.

The twenty-second season will likely come with some repercussions to these sports because of the current crisis of COVID-19. But one thing that all OSU sports fans can count on is the welcoming voice that we hear over the radio or television, and that reliable voice is Mike Parker.