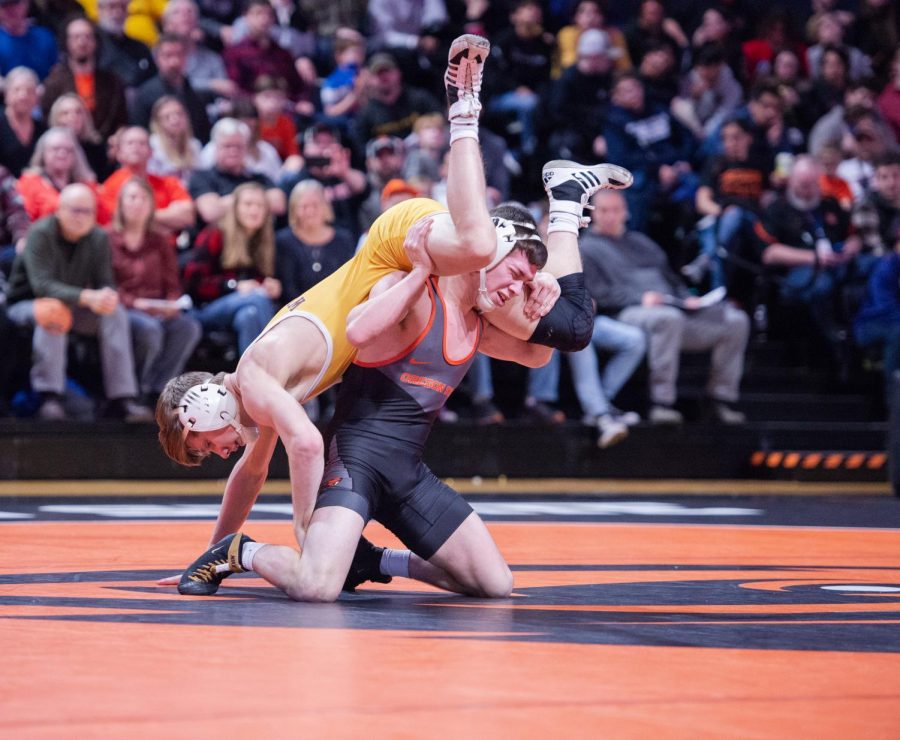 Pendleton has served as an assistant coach at ASU for the last six seasons, during which the team won three of the last four PAC-12 championships. Prior to ASU, he began his coaching career as a volunteer assistant at Oklahoma State, followed by an assistant coaching position at Wyoming. Pendleton wrestled as a student-athlete at Oklahoma State, where he was a two-time NCAA national champion.

Dan Bartholomae, OSU executive deputy athletic director, chief operating officer and sports supervisor for OSU Wrestling, said Pendleton separated himself from other candidates due to his experience in improving teams’ academic and holistic development, his championship experience as both a player and coach, his successful recruiting on the West Coast and his commitment to the wrestling community, with strong ties to youth and USA wrestling across the nation.

“[My initial impression was] that he was an engaging and energizing personality that also was genuine and authentic, that he has a lifelong passion for wrestling and that he was an individual who understood how to develop leaders in sport and in the community,” Bartholomae said via email.

Due to the COVID-19 pandemic, the search committee and hiring process was done virtually and with no in-person interviews or campus visits.

Pendleton said although he was not able to visit campus during the interview process, he is familiar with the community and has coveted the program since he was a student-athlete. As a wrestler at Oklahoma State, his first home match was against an OSU wrestler.

“I’ve got to go and see the town, see the program, meet people—I do a ton of camps and clinics in the Oregon and Washington area, where I’ve just know that there’s always been so much support and so much excitement for the program that it was always in the back of my mind: wouldn’t it be great to be the head coach there one day? Wouldn’t that be a job that I would just jump at?” Pendleton said.

As a California native, Pendleton said he hopes to place a heightened focus on recruiting student-athletes from Oregon and neighboring West Coast states.

Pendleton is still in Arizona due to COVID-19, but hopes to make the move to Corvallis soon to begin planning and connecting with the team and faculty. Yet, he admits that the future, for the time being, is uncertain.

“I can’t control what’s going on in the country and in the world right now, and it’s obviously a unique situation for everybody. I think if there’s one thing that coaches hate telling an athlete, it’s ‘I don’t know.’ And I’ve literally had to say that repeatedly, all day today, because I don’t know what’s going on, I don’t know what’s going to happen,” Pendleton said. “My first priority is the athletes’ safety, so I’ve been communicating with them, and had my first team meeting with them where they all got to share their locations with me. I want to know that they’re safe and they’re taking care of themselves and their families. Second, the term just started, so academically, we’re going to hit the ground running, and I want to start it on a good foot.”

Brandon Kaylor, a redshirt freshman on the OSU Wrestling team, said he first met Pendleton in 2016 when he visited the PAC-12 Championships in Tempe, Ariz. on an unofficial visit, but has not had an additional chance to connect with him yet, aside from the team’s Zoom call.

Kaylor said he had a special bond with former head coach Zalesky and is incredibly thankful for his leadership, but is excited to see what Pendleton can bring to the program.

“I am excited to see what Coach Pendleton can do for our team being an excited and determined young coach. I also think I will be a lot more excited when I see what coaching staff Coach Pendleton hires on and how our team can feed off of their personalities as role models and coaches,” Kaylor said via email.

Bartholomae said going forward, OSU Athletics’ goal for OSU Wrestling is to set a high academic standard, to ensure that student-athletes are positive members of the community and to become a top-10 program that develops multiple All-Americans each year.

“We are excited about the opportunity that OSU presents to advance the sport of wrestling in the PAC-12, on the west coast and nationally—this is a program with a rich tradition that has demonstrated the ability to be the class of the PAC-12 and a top-10 finisher in the national tournament,” Bartholomae said via email. “We are particularly excited that we have found the right leader to advance the program’s goals and develop excellent student-athletes as people as well as athletes.”

As a student-athlete, Kaylor said he is looking forward to the future of OSU Wrestling under the leadership of Pendleton.

“Having three more years of eligibility and being the young team that we are, I believe we will make our way back to the top and reclaim the PAC-12 title as a team and back to being a top-10 nationally-ranked team,” Kaylor said via email. “I also hope to see an Oregon State wrestler at the top of the NCAA podium. I say this because even though we have had many All-Americans, we haven’t had a national champion since Les Gutches in 1996 and that is something that this team needs.”