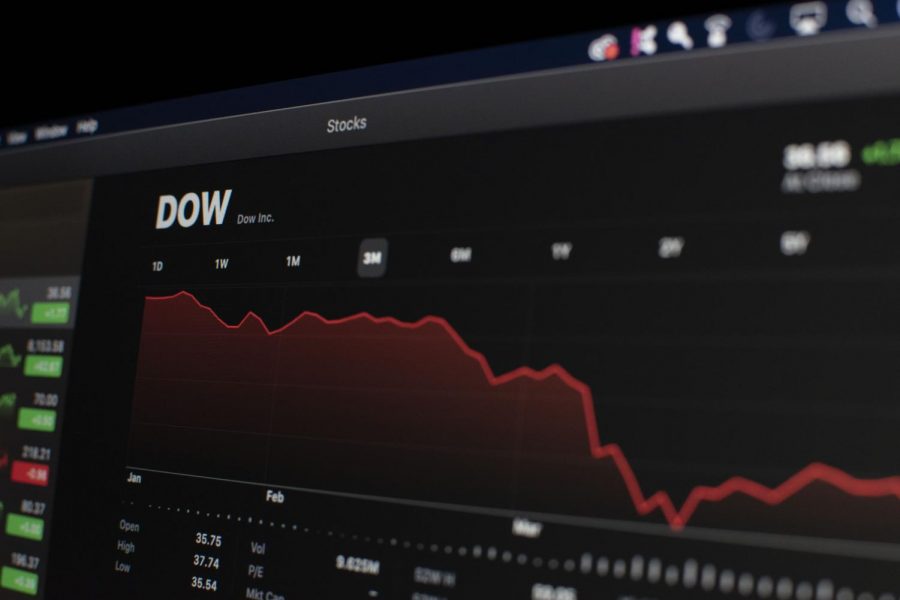 Dow Jones, a stock market index that measures the stock performance of 30 of the largest companies on the stock exchange, experienced its worst drop in history this past month.

Correction: The story previously inaccurately reported points as percentages and has been updated to accurately represent current top daily point losses in the stock market.

Students at Oregon State University invest year-round in the U.S. stock market, and with COVID-19 causing a major point drop, these same students are picking strategies for new investments.

The stock market is at the lowest recorded point drop in history due to shutdowns across the nation, only falling short of the Dow crash in 2008. The first two weeks of March showed an over 200 point drop each day, peaking on March 16 with a 324.89 point drop and an overall change of -11.98%, according to the Dow Jones Industrial Average. In the last three months of 2008, the average drop remained under a 100 point loss.

Since August of 2019, first-year student Jacob Kutnyak has been investing in the stock market in two separate brokerage accounts, with hopes to build a steady income for the future.

“One of my two portfolios has dropped 30% since the quarantine has been in place, and the other has suffered nearly that amount,” Kutnyak said. “When you’re in the market you get an emotional high off of how good [or] bad your portfolio is doing, and that’s the challenge of it as a beginner… Right now I’m buying more than ever due to everything going on, [because there’s] a discount on its normal price.”

Kutnyak added that he waits for either quarterly dividends on his investments, or by predicting which companies will naturally go up with market gains. Both methods of investment are long-term and common ways that people invest in the market.

Another form of trading suffering in recent months is Bitcoin, dropping from approximately $10,000 in early February, to dropping to $7,297 as of last Wednesday.

“I don’t consider myself as an investor, I am a trader, a swing trader, [and] I trade short term mostly, depending on technical analysis and price action,” said Mickey Alsaleh, a first-year nuclear engineering student.

Alsaleh said he is trying to make bitcoin his source of income in the future but mentioned that the volatility in the market might equal more opportunities.

“It would be great to invest a lot of money when the market is at its lowest,” said Dennis Adams, a professor of finance at Oregon State University. “But no one really knows when that is. Was it last month, or is it yet to come? The soundest advice is to invest at regular intervals rather than try to time the market.”

Due to the uncertainty of the coronavirus and the length of the nationwide shutdowns and global travel bans, the market is in flux until the pandemic is resolved. In the COVID-19 Response Plan, released by the U.S. government on March 14, it is predicted that the pandemic will last 18 months or longer.

According to Adams, the worst thing a trader or someone invested in the market could do right now is start panic selling.

Panic selling is when anyone with investments in the market chooses to sell their stocks for a quick cash-out opportunity. Doing this decreases the price of the stock and further drops the market.

“Every time stock prices change, it is a reflection of investors’ expectations of the future earnings of those companies [and] few things create as much disruption and uncertainty as a pandemic,” Adams said. “Smart investors are always well-diversified, so they never lose everything.”